The statue of Capt. Benjamin Stone Jr. in the burial lot in Cedar Grove Cemetery that he shares with his Civil War soldier brethren from Dorchester.
Bill Forry photo

Wentworth team shows where, when they fought

On Oct. 25, 1903, a statue of Capt. Benjamin Stone, Jr., who was among hundreds of thousands of Union soldiers who died fighting the Confederate rebels in the Civil War, was unveiled at Cedar Grove Cemetery as a monument to the service that he and his fellow Dorchester war veterans, some of whose remains lay under the ground below the statue, gave to their country during the devastating conflict.

Some 120 years later, a team of students from Wentworth University has produced a research project that focuses on the population and history of the Stone lot in the Dorchester burial ground.

Professor Ella Howard, who teaches the popular “Boston History” course at Wentworth, said the idea about exploring Dorchester’s connection to the Civil War came about naturally after Dave Mareira, a neighbor of the cemetery and a Wentworth employee, showed her the Benjamin Stone, Jr. Grand Army of the Republic lot in the burial ground.

“I saw the lot and I knew we had to do something on it,” she said. “Fortunately, Dorchester has pretty extensive documentation of that time because they kept their own records before being annexed by Boston. And as the students learned, a lot of the links between Dorchester and the Civil War are really special.”

The class of two dozen drew upon primary source materials from the city of Boston archives in West Roxbury for their research, as well as data courtesy of Robert Severy, a volunteer at the Dorchester Historical Society who has dedicated much of his personal life to researching and writing books about the cemetery.

The collaborative effort has produced an interactive website chock full of information about Dorchester’s Civil War legacy, including a timeline of Boston history and the conflict, information about each of the 40 veterans buried in a Stone plot — including maps of where they lived in Dorchester and which battles they fought in —and a slide show that follows the trail of Union soldiers from the neighborhood who lost their lives, or were wounded, or were taken prisoner during the conflict. 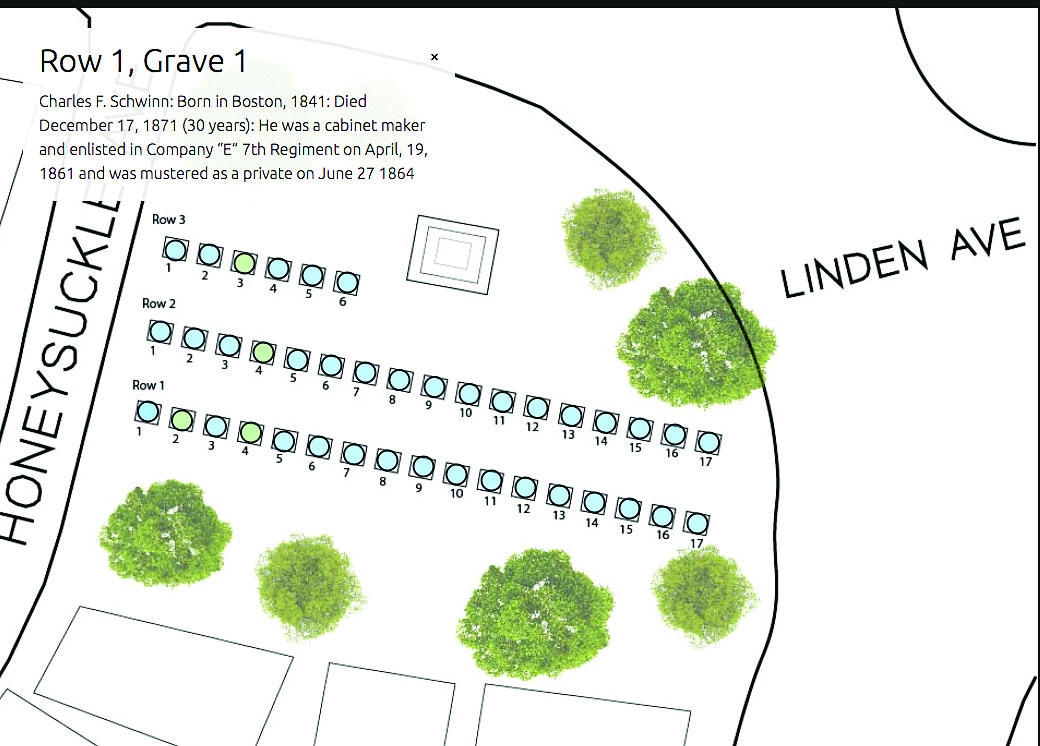 An image from the Wentworth Explore Boston History website shows the level of detail presented about Civil War veterans who are interred at Cedar Grove Cemetery. The graves are clustered together near a statute to Capt. Benjamin Stone, Jr., who led the 11th Massachusetts regiment’s Company K into battle and was killed in action in 1862.

Howard noted that many of the documents in the archives, such as enlistment records, offer a glimpse into the realities of local soldiers answering the call of duty.

“There’s kind of an interesting cache trail that you can trace based on these really rich resources about every financial transaction that happened. For example, on papers documenting bonus payments to be received later, soldiers would write something like, ‘I, so-and-so, am enlisting, please pay this bonus to my mother.’ Some of those are quite poignant, and some of the soldiers were under the age of 18...some of my students told me, you know, this is really moving thinking about someone so young enlisting.”

Another jarring document that surfaced during the research was a “Consent to the Enlistment of a Minor” form, in which an Errol Tolman of Dorchester gave consent to send his 14-year-old son to the war.

However, most of the soldiers buried in Stone Lot volunteered for service, a fact that surprised 19-year-old Julian Pullo, a sophomore in Howard’s class and former Dorchester resident. Pullo’s role in the project included mapping the Civil War battles that Dorchester residents took part in. Of the 1,342 men from the neighborhood who fought in the conflict, Pullo found, most ended up in the mid-Atlantic region.

“The project changed my perception of Dorchester in the way that it revealed the neighborhood’s role in protecting the Union’s capitol,” said Pullo. “Most of the battles Dorchester residents fought in were battles around D.C. that were meant to protect it from Confederate forces.” 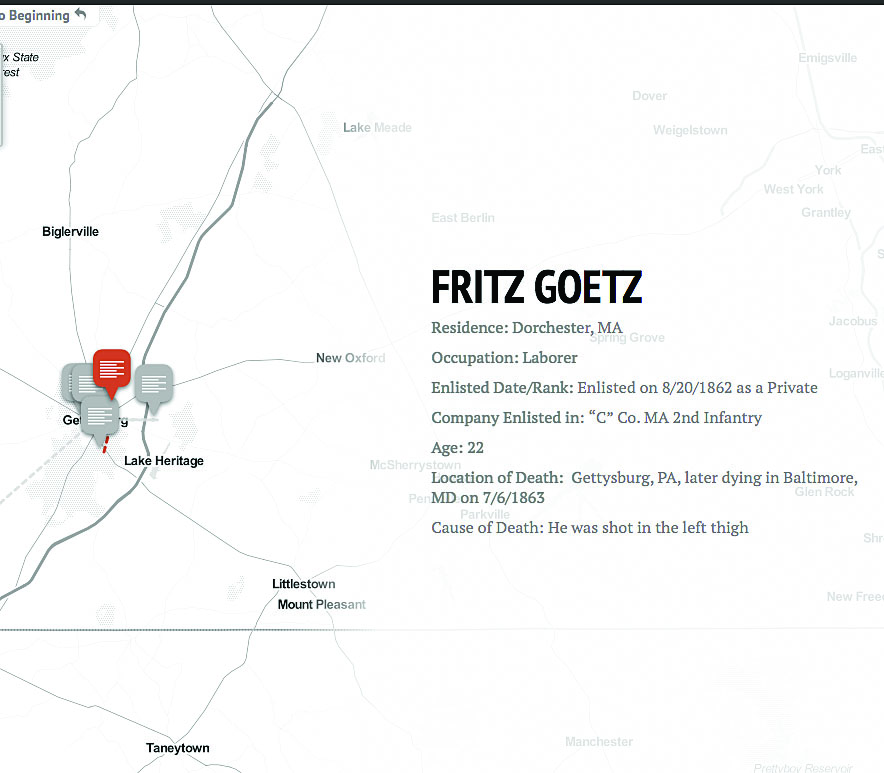 This selection from the Wentworth students’ project lays out the details of the life that Fritz Goetz gave to his country at Gettysburg.

Among the soldiers who fought in and around Washington was Benjamin Stone Jr., the namesake of the burial lot.

A Dorchester native, Stone Jr. was born in 1817 and worked as a music engraver on Washington Street. In 1861, he became captain of Company K of the 11th Regiment of the Massachusetts Volunteers, known locally as the Boston Volunteers. He fought in the First Battle of Bull Run, in which the Union’s Army of the Potomac was humiliated by Rebel forces in the first large battle of the conflict. He was mortally wounded in the Second Battle of Bull Run the next year, at age 44, was one of 13,824 Union casualties in the three-day-long battle that also accounted for almost 9,000 Confederates killed or wounded.

After the war, Massachusetts Post 68 of the Grand Army of the Republic, a fraternal organization founded in 1866 to unite Union soldier veterans, secured a large plot of land at Cedar Grove Cemetery for any members who wished to be buried there. 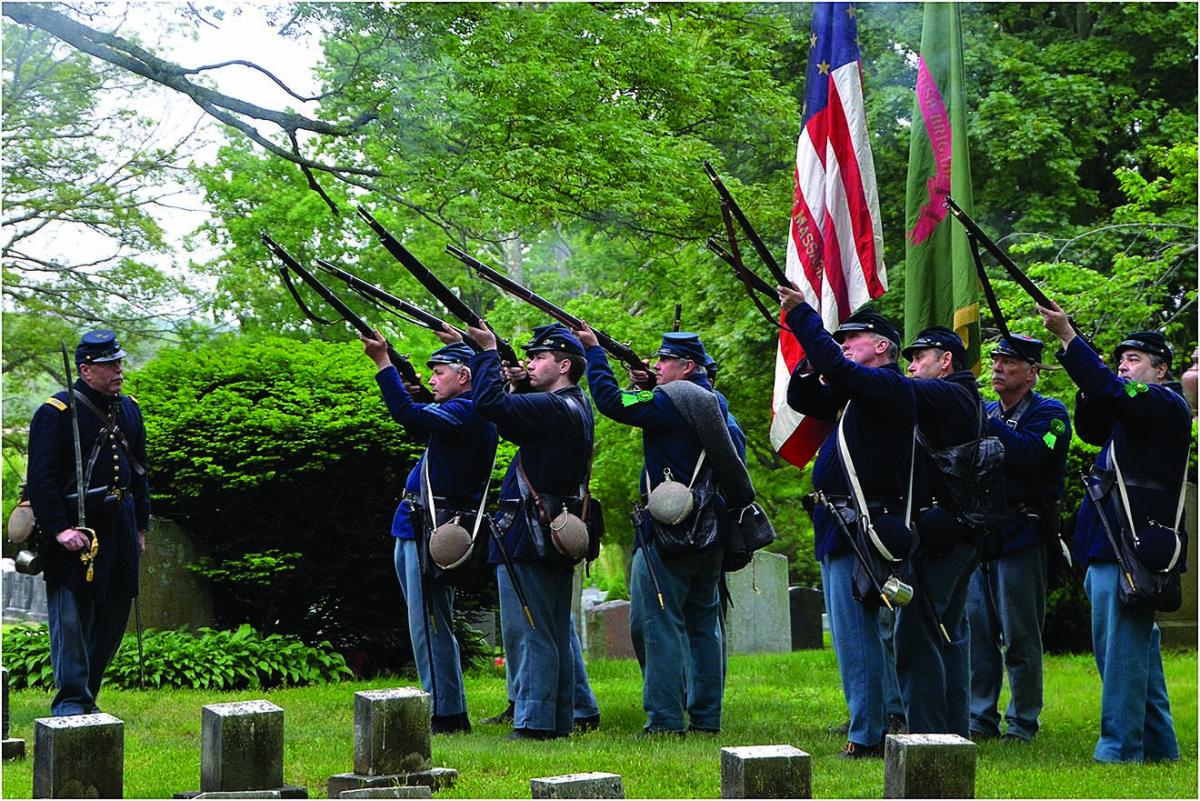 Members of the Irish 28th Massachusetts Volunteers, who portray Union soldiers, fired a volley in salute to the men interred at the Grand Army of the Republic burial plot in Cedar Grove Cemetery during Memorial Day observances in May 2017. Chris Lovett photo

On the day in October 1903 when the statue of Benjamin Stone, Jr. was unveiled, Thomas F. Temple, a lifelong Dorchester resident and an associate member of Post 68, delivered an address commemorating those men and their sacrifices:

“In remembrance not only of our Dorchester soldiers, living or dead, but also in remembrance of the vast numbers of heroes who gave up their lives on the field of battle, in the hospitals, in the prison pens of the south, and on the sea, in remembrance of all who died, and dared for the perpetuity of the nation, I present this figure, representing the union volunteers of the civil war, through you, Mr. Commander, to Benjamin Stone, Jr., Post 68, G. A. R., with my best wishes for its success and continued prosperity.”

To view the history project on Cedar Grove Cemetery and to access the digital interactive maps, visit explorebostonhistory.org/cms/cedar-grove-cemetery.