Residents of Mattapan’s Fairlawn Apartments held a rally last Friday evening to protest what they say has been a trend of steep rent hikes and inadequate living conditions at the 400-plus-unit complex.

City Life/Vida Urbana, a local housing justice nonprofit, facilitated the rally in support of a group of about 30 residents who waved signs and shared their grievances along Cummins Highway.

“I don’t know what homelessness is, but I know it’s a sorry state of affairs,” said Linda Sinclair, a resident of Fairlawn apartments for 37 years. “They go up on the rents every year and I’m at my max. I’ve been here so long I don’t know where to go and I would really like to stay here.”

Sinclair, a retired senior citizen, said she started working with City Life/Vida Urbana about six months ago after learning that she would soon be seeing yet another rent increase. According to tenant organizers, the management company that owns the development – DSF Group – has raised some families’ rents by as high as 20 percent since it acquired the property in July 2018 for a recorded $65 million. Organizers say some families have already been displaced by rent increases. 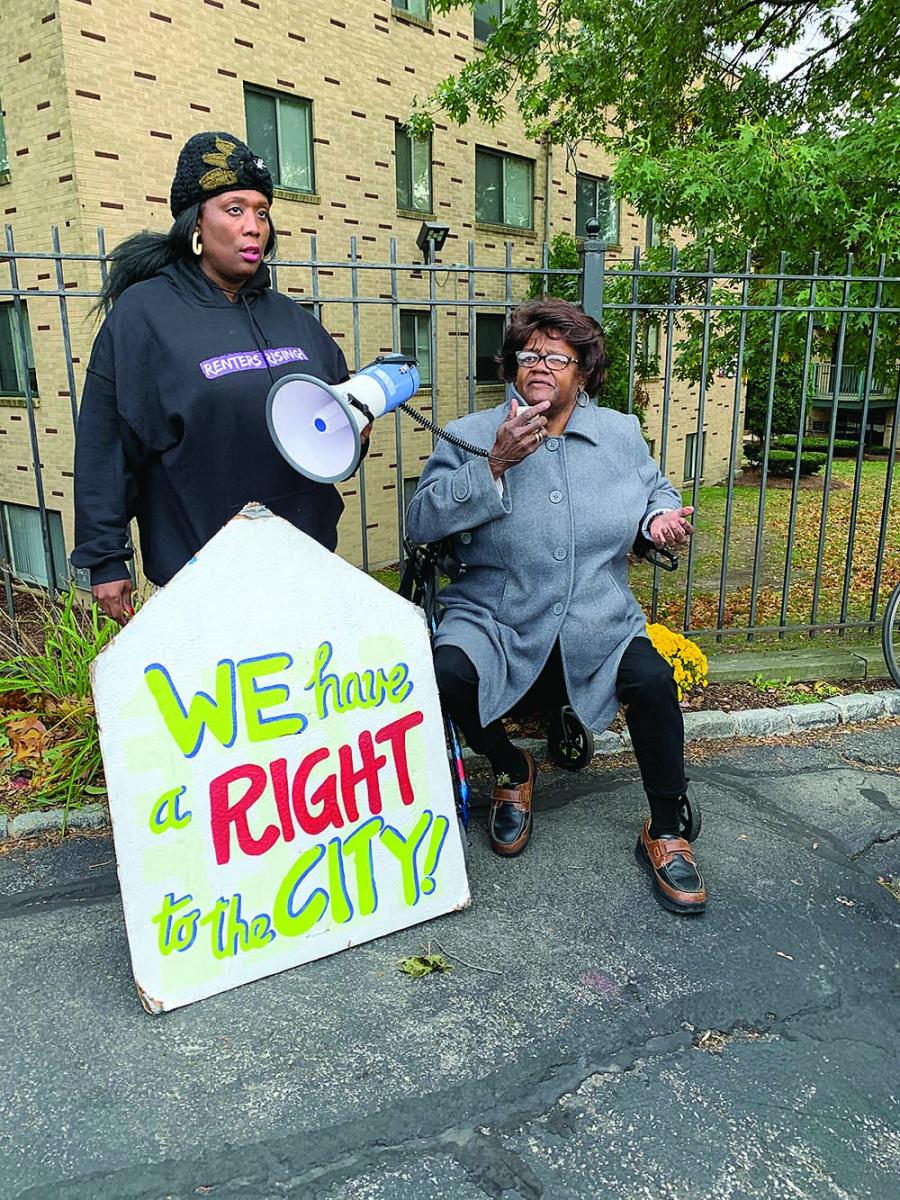 Gabrielle René, left, an organizer with City Life/Vida Urbana is shown with Linda Sinclair, a resident of Fairlawn Apartments for 37 years.

DSF representatives have not responded to the Reporter’s request for comments about the rally last week or the letters containing demands that the tenants’ association have sent to their offices.

“It’s an unjust irony,” said Gabrielle René, a community organizer with City Life/Vida Urbana. “After this community advocated for better public transit and put sweat equity into improving their neighborhood, they are getting driven out because speculative investors like DSF Group see it as valuable now.”

According to the tenant’s association, a large percentage of current tenants have been at Fairlawn Apartments for decades and live on fixed income. Some of them hold Section 8 vouchers and many are immigrants.

In a press release issued when the property was purchased, DSF Group President Josh Solomon said, “This acquisition aligns perfectly with our strategy of purchasing underutilized properties at transit-oriented locations.”

Residents said that the rent hikes are causing residents to pack up and leave.

“People are moving out, but you don’t know it. All you see is their furniture in the dumpster,” said longtime resident Betty Lewis. 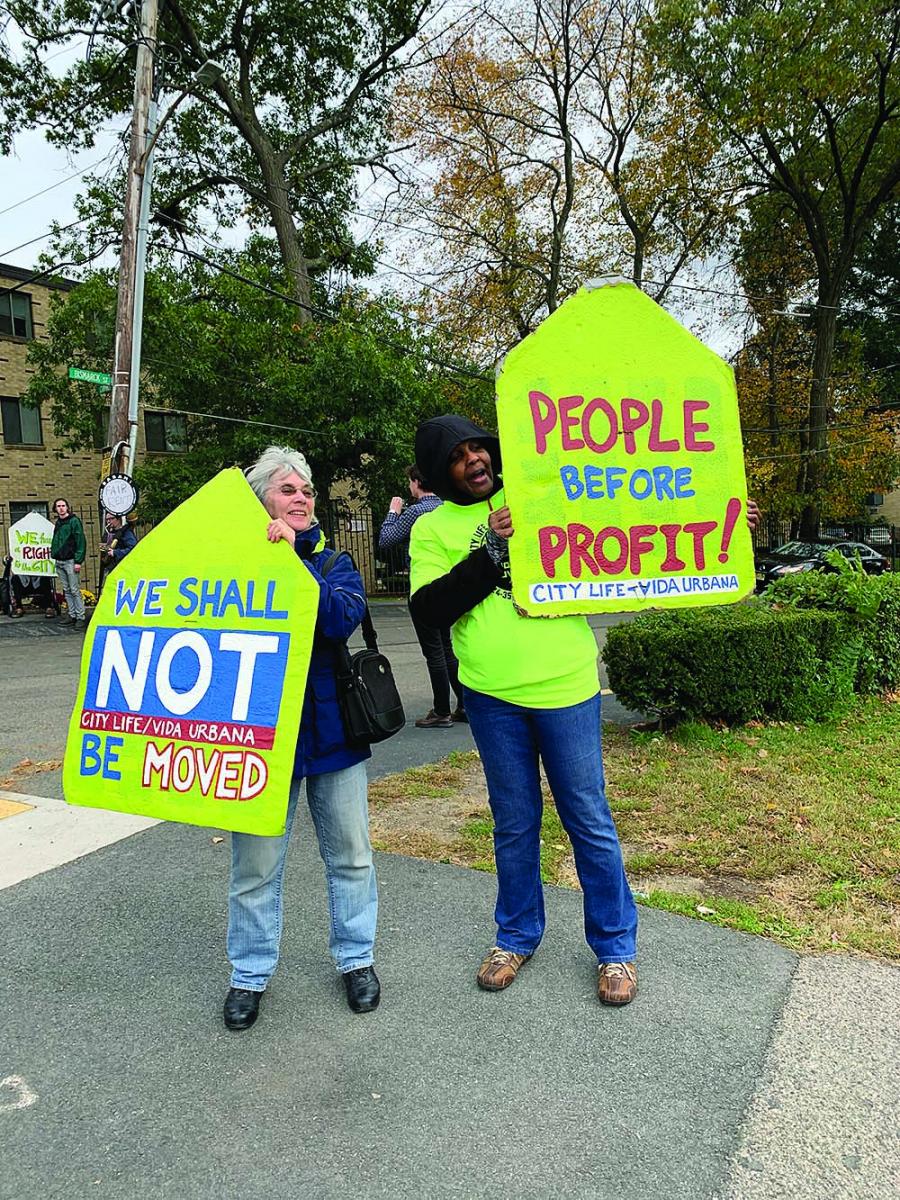 Annie Gordon, who has lived at Fairlawn for 43 years, said that when her lease was up for renewal late in September, she chose not to sign it after seeing the rent increase. “I received a really big increase that I can’t afford. I’m retired now, and I would need to try to find someplace else and a lot of places have waiting lists of anywhere from two to five years,” Gordon said.

“I decided not to sign and started working with City Life. They told me that I have rights and they taught me about those rights. I’m not asking for anyone to give me anything; I’m just asking to be treated fairly.”

Said Steve Meacham, a Community Organizer with City Life/Vida Urbana: “This is a case in point for why Boston desperately needs rent control.” Added Gabrielle René: “This is not right. It’s immoral. If the management doesn’t want to be here and work with us, then they are the ones who need to leave.”

The letters to management from representatives of the Fairlawn Tenant Association contain three “demands”:

• Keep rents for section 8 tenants within the payment standard and keep rent increases for all tenants to a manageable affordable level of two percent per year maximum.

• Fix the “poor conditions” in all of the apartments, including addressing pest and mold issues, provide adequate security for the buildings, and give children a safe area such as a playground or park for them to play in.

• Meet with the association to work out a long-term plan for the tenants of this building.

To date, there has been no response from DSF Group.