The 2019 field of Boston City Council candidates- minus Althea Garrison— were shown at a forum in Dorchester in August. Chris Lovett photo

Voters in Boston will be asked to winnow the field of potential at-large city councillors from 15 to 8 in next Tuesday’s preliminary municipal election. This year’s race features a large and diverse field of candidates vying for four spots. The top eight finishers in the balloting will go on to a run-off election in November.

Four incumbents – Annissa Essaibi-George, Michelle Wu, Michael Flaherty, and Althea Garrison – will compete alongside 11 other candidates to earn one of your four votes. Polls will be open from 7 a.m. to 8 p.m.

Here’s a look at the candidates, in the order they will appear on the ballot: 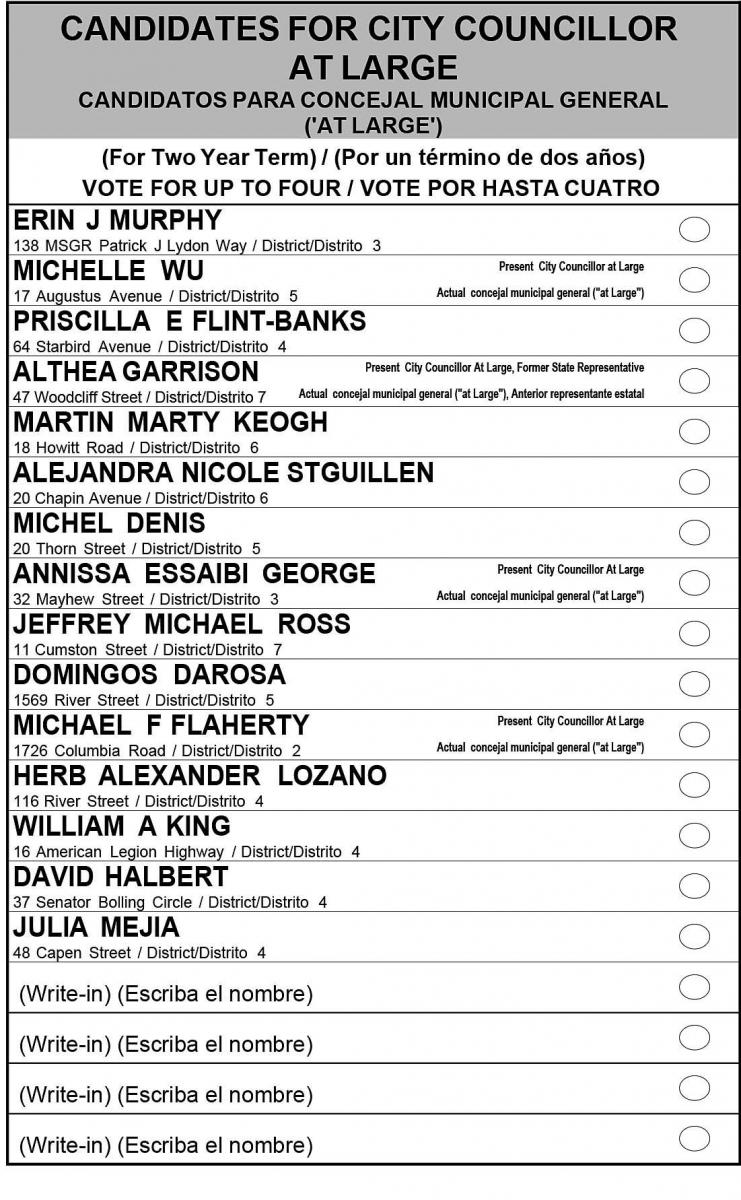 Erin Murphy is a veteran Boston Public School teacher and first-time candidate for office. She lives in Dorchester and is a single mother with four children. She has been candid about her position on tackling the opioid epidemic by providing recovery services and addressing the mental health needs of those struggling with addiction. She has taken a leave from her teaching position to run for office.

“I’m feeling upbeat, energized and positive,” Murphy told the Reporter on Tuesday. “I’ve been working hard since I got on the ballot... I feel energized by talking with people and connecting with neighbors in Dorchester but also in all of the other neighborhoods in the City.”

She has received endorsements from a number of trade unions, including Bricklayers Local 3, IBEW Local 103, Local 2222, Ironworkers Local 7, Laborers Locals 223, and Pipefitters Local 537.

Michelle Wu was first elected to the Boston City Council in November 2013 at the age of 28, becoming the first Asian-American woman to serve on that body. She topped the ticket in the last municipal election in 2017, garnering more than 65,000 votes in a year that also featured a mayoral race.

“Everywhere I go people are eager to get involved in city government,” she told the Reporter this week. “I’m hopeful that will translate to higher turnout and people will show up to the polls on Tuesday.”

Wu has also emerged as a sometime critic of the Walsh administration and, even more frequently, of the MBTA. She has gained endorsements from state Attorney General Maura Healey, Teamsters Local 25, the Ward 15 Democratic Committee, the Boston Teachers Union, the Greater Boston Labor Council, MA Womens’ Political Caucus, and an assortment of elected officials.

Priscilla Flint- Banks is a lifelong Boston resident with an extensive background in civic activism.  She has worked as a banker, housing counselor, and foreclosure prevention specialist at Mass Affordable Housing Alliance (MAHA), and payroll and general service director for the City of Boston. She is a founding member of Mothers for Justice and Equality (MJE), co-founder of the Black Economic Justice Institute (BEJI), and is the job chair for the Black Economic Council of MA (BECMA.) In 1986, she assisted in the rewriting of the Boston Resident Job Policy (BRJP). If elected, Flint-Banks says she would focus on economic development, community engagement, affordable housing, and “living wages through good job standards.”

Althea Garrison was sworn in as an at-large member of the City Council in January 2019, filling a vacancy left when US Rep. Ayanna Pressley resigned to take her seat in Congress. Garrison finished in fifth place in the Nov. 2017 municipal election at the lower end of a large gap (27,311) between her fifth place finish with 18,253 and the fourth-place finisher Annissa Essaibi-George, who racked up 45,564 votes.

Garrison is unique among the current crop of councillors in that she has served one term in the Massachusetts House of Representatives (‘92-’94). She worked for 34 years as a clerk in human resources for the Massachusetts State Comptroller’s Office and is the vice-president of the Board at Uphams Corner Health Center in Dorchester. She has been endorsed by Boston Firefighters Local 718.

Martin Keogh is a life-long resident of Boston who grew up as one of seven children in Mission Hill and Hyde Park. He received his BA from Boston College, and attended Mass School of Law after which he practiced law. He has worked as a lawyer for the Boston School Committee and the Boston City Council from 1991-2001. He has run for office before— an unsuccessful bid for Register of Probate in 2014 and city council in 2013. He lives in West Roxbury.

Alejandra St. Guillen was born and raised in Mission Hill. She is a parent, wife, and public advocate who says she will work on solutions for equity in education, increased affordable housing, safety of neighborhoods, transit equity, and socially just solutions for climate change. She is a graduate of Boston Latin School, a City Year alumna, and holds a B.A. in Economics and African-American Studies from Wesleyan University and an M.Ed from City College.

Michel Denis is running on his five-point platform of environmental education, low-income housing, increasing jobs and employment, entrepreneurship, and public safety. Denis says he would host an annual, curriculum-based BPS job fair for seniors, and partner with local businesses to establish a Venture Capital Summer Internship Program for BPS juniors.

Annissa Essaibi-George is a mother, a former Boston Public Schools high school teacher, a small-business owner, and a lifelong Boston resident was elected to the City Council in November 2015. She is a first-generation American and the daughter of Tunisian immigrants.

“We’ve worked really hard on the council in this last term, and I’m hopeful that the voters will appreciate that and vote for me when they go to the polls a week from today,” she told the Reporter on Tuesday. “What I’ve been sharing with the people of Boston since I was last elected three years ago is that I’m working hard every day, and I don’t take the honor that they have given me lightly.”

She added, “We’re focused on the big picture issues, we’re  task-oriented and making sure that every resident in Boston has access to high quality of life, that kids are attending high quality schools, and that we are working every day to improve those services where we may have failed residents.”

She has been endorsed by Attorney General Maura Healy, Mayor Walsh, the Boston Teachers Union, Teamsters Local 25, and the Ward 15 (Dorchester) Democratic Party Committee, among others.

Jeffrey Ross is an attorney making his second attempt to win election to the council. After graduating from Northeastern University Law School, he worked as a researcher of institutional oppression in the legal system. As an attorney, he became an advocate for immigrant communities and LGBTQ+ families.  Ross says he wants to work on formulating a new neighborhood-based AMI (area median income) model to encourage more affordable housing. He is also focused on issues of transportation, environment and open space, public safety, and affordable, healthy food.

Domingos DaRosa lives on River Street in Hyde Park and is a husband, a father of four, and a small business owner. He has called Boston home since 1978 when his family moved here from Cape Verde. He grew up in Roxbury, Dorchester, and Hyde Park. After graduating from Madison Park High and earning a degree from the Benjamin Franklin Institute of Technology, DaRosa devoted himself to youth outreach and mentorship. He says he hopes to restore trust between the government and local communities. He has been endorsed by the Ward 15 Democratic Committee.

Michael Flaherty is a South Boston native Michael Flaherty who is seeking election for the fourth straight time since winning an at-large seat in 2013. He previously served on the council from 2000-2008— including a term as council president— and challenged the late Thomas M. Menino for mayor in 2009. He is a former assistant district attorney.

Flaherty is a former member of Teamsters Local 25, and has regularly earned endorsements and broad support from Boston-based unions, including Pipefitters Local 537, IBEW Local 2222, Ward 15 (Dorchester) Democratic Party Committee, and the Boston Teachers Union. He was a longtime advocate for the Community Preservation Act, which was finally adopted by the city in 2016. Flaherty placed third in the last city election with 51,763 votes, some 7,000 behind second-place finisher Ayanna Pressley.

Herb Lozano, a Mattapan native, is a first-time candidate who says he hopes to bring more diversity to the council. He served as a legislative aide to former state Rep. Carlos Henriquez. He told WBUR “that I’ve put in front of folks ... especially men of color, to let them know that there are no men of color on the City Council. So I think I’m bringing that diversity as someone who identifies as a Latino [and] as an African American.”
William King is making his second attempt to win election to the council. In 2017, the 28-year-old finished seventh in a field of eight, earning 8,773 votes. He graduated from Boston Tech Academy in 2007 and went on to study social science at Quincy College. King says that if he’s elected he’ll focus on education, public safety, housing, sustainable energy, and the opioid epidemic. He has been endorsed by the Ward 15 Democratic Committee.

David Halbert is a Dorchester resident who says he’s running for an at-large seat because he “truly believes in the power of government and public policy not just to sustain people, but to uplift them.” He has worked on the staff of Boston City Councilors John Tobin, Sam Yoon, and, later, for Governor Deval Patrick. He has been affiliated with East Boston Main Streets and the Young Professionals Network of the Urban League of Eastern Massachusetts.

Halbert favors a hybrid – elected and appointed – school committee and a civilian review board and partnering city agencies with Boston Public Schools to create career opportunities for students. He was endorsed by the Ward 15 (Dorchester) Democratic Committee.

Julia Mejia is a single parent and immigrant who arrived in Dorchester from the Dominican Republic when she was five. She has worked as a producer at MTV and is the founder of two civic engagement organizations in Boston. Her vision is focused on fighting for quality public school education and resources for teachers, pushing affordable housing policies that protect tenants and encourage homeownership, and expanding meaningful civic engagement opportunities.

Julia is a graduate of Dorchester High School and holds a Bachelor of Arts degree from Mount Ida College. She was endorsed by the Ward 15 (Dorchester) Democratic Committee.