Skip to main content
Jasmine Braswell, Special to the Reporter

At one point after he left his hometown of La Ceiba, Honduras, and before he offered the class student speaker remarks on the graduation podium at Benjamin Franklin Institute of Technology (BFIT) this month, Regis Lino-Kelly went to the movies and felt a switch flip in his head.

The Uphams Corner resident was just a kid when he caught a Red Line train with his cousin, a mechanical engineer, bounded into a Downtown Crossing theater, and saw Iron Man for the first time.

“Honestly, when I was growing up, watching Iron Man was my favorite thing to do.” said the 23-year-old Lino-Kelly. “He’s my favorite superhero and one day I just asked one of my cousins, ‘How does he know how to do all these things?’ and my cousin told me, ‘He’s an engineer.’ I looked up engineering and the different disciplines and I decided to focus on mechanical engineering once I had the chance to. When I got into high school, I already knew what I wanted to do in college.”

Lino-Kelly graduated with a bachelor of science degree in mechanical engineering technology on May 18. In his valedictory speech, he shared the story of his journey to Boston and BFIT from Honduras and talked about the things that motivate him with his fellow graduates. He will soon begin working in Chelmsford for 3M, the multinational industrial corporation that is involved with worker safety, health care, and consumer goods.

It has taken lots of sacrifice and dedication – and the inspiration from a certain superhero – to get him to where he is in life today, more than 2,000 miles away from the Central American port city of La Ceiba that he left when he was five years old.

Looking back, Lino-Kelly talked about how he had to adapt to a new way of life. He said the culture in Honduras, like its weather, was warm compared to the chilly greeting he got when he reached Boston.

“It was kind of a culture shock when I first got here,” he said. “Back in Honduras everyone was more open, a lot more friendly, and when I got here, I wasn’t greeted with the same response. It was a big transition for me; I just had to adjust and get acclimated to my surroundings…”

He settled in with his grandmother, who, already in Boston with her citizenship papers, had decided to bring her family up to the US one by one. “I feel very fortunate,” he said. “I know other people had to go through a lot of worse things, so I’ve always been fortunate about my grandmother being able to bring us up the way she did.”

His biggest adjustment was learning English, he said, and it was a long process. “For me, it took me a couple of years. I would come home from school and watch PBS Kids, just watching a lot of English TV shows, just trying to understand the language and observe the behaviors of the different characters between them.”

An important support system and resource for Lino-Kelly, and part of the village that helped guide him to college, was C5 New England, a five-year summer and school-year program that helps teen leaders develop their leadership style and expand their academic, career, and civic horizons. It is built upon the foundation of the 5 “C’s” that seek to empower the young to be “Character-driven, Community-focused, Challenge-ready, College-bound, and Committed to a better future.”

C5 became Lino-Kelly’s second family. The program, he said, “was helpful to me” in learning the ins and outs of college and what to expect in terms of getting financial aid, scholarship money and what to look for when selecting a college.

He remains active with C5, mostly because of his 16-year-old sister, Norda Lino-Kelly, who goes to the same high school he went to – Boston Leadership Community Academy – and plays basketball at New Mission High School.

He spoke highly of his sister and of the close relationship they have. He is very proud of how she is making her way and of her success so far on the court and in the classroom. “She’s amazing,” he said. “I don’t know where to start with her. She’s incredible, smart, she loves sports. I feel like she’s in a better position than I was when I was her age.” 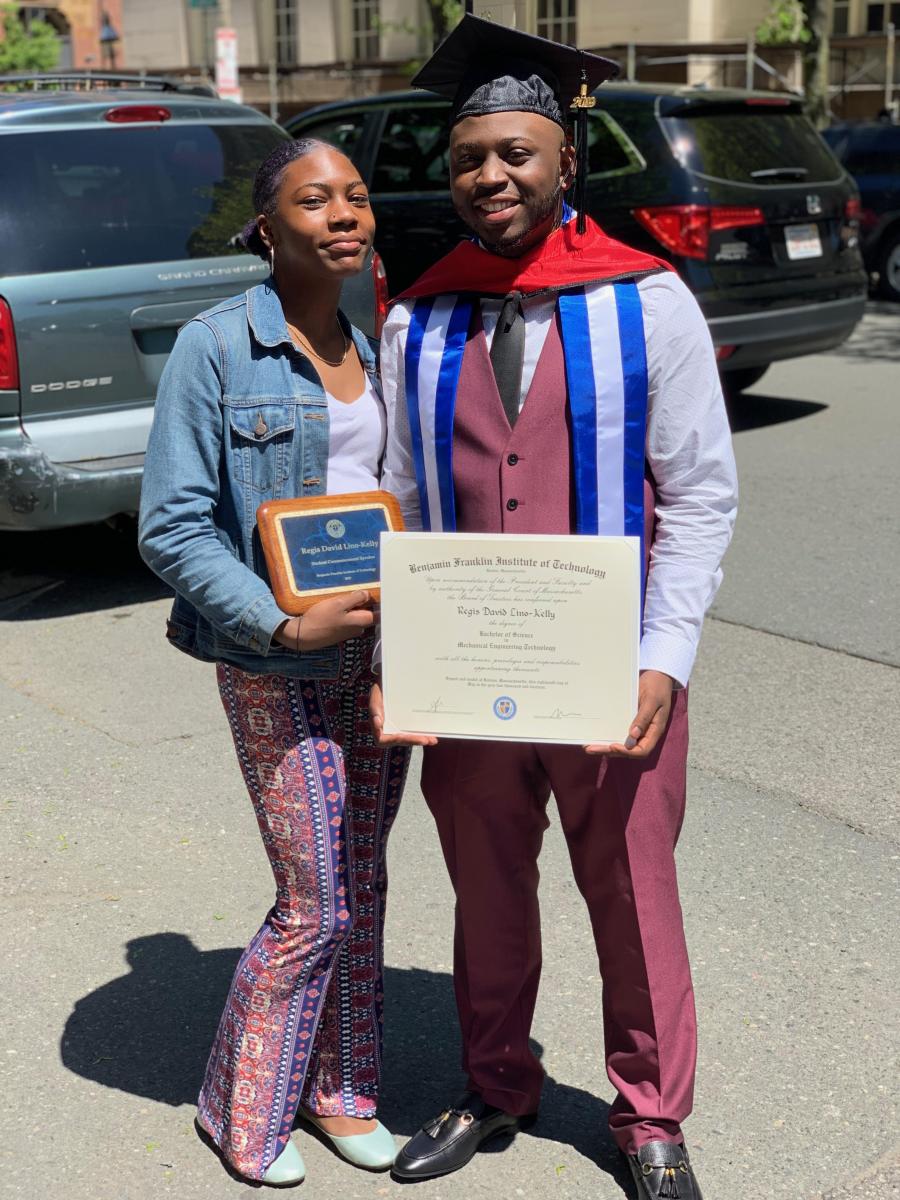 After Lino-Kelly enrolled at BFIT, he gained a stalwart supporter in his student advisor, Shawn Ayala. He not only became his mentor, he also was someone he could talk to, someone he knew had his best interests at heart.

For his part, Ayala said, “A big part of our role is helping students navigate the college process and the success while they’re here. Regis is a guy that if he sets his mind on something, he will do whatever it takes to get it done. So, it was really just being that person to remind him why he is here.”

“BFIT, I feel like it’s more of a community than just a college itself.” Lino-Kelly said when asked to describe the school. “The professors are very helpful, very hands on. I love the projects we got a chance to do, the faculty and staff are always helpful, and it doesn’t matter if its admissions or the financial aid office, everyone always has a lending hand.”

Lino-Kelly speaks with pride of his now alma mater: “There’s not anyone here that will shut you down or push you aside. Everyone will try to make time for you.”

Correction: An earlier version of this article characterized Mr. Lino-Kelly as the class valedictorian. In fact, he was the student speaker at the BFIT graduation.