Speaking at Friday’s Juneteenth rally at Town Field in Dorchester, Dot House nurse Claudine Lopes quoted a well-known lyric from Sam Cooke: “It’s been a long time coming, but I know a change is gonna come.” That theme of “delayed liberation,” coupled with a feeling of hope for the future, was the common thread in several activists’ remarks at the event, which drew roughly five hundred people to the Fields Corner park.

In a rousing, sermon-like speech, Pastor William Dickerson of Greater Love Tabernacle Church expressed indignation at how African-Americans have struggled for dignity and human rights decade after decade.

Joel Richards, a BPS teacher who co-organized the rally, said in his remarks that the rally was about “giving black people the country they deserved in 1865.” Later on, he told the Reporter he was “overwhelmed” by the large show of support he saw at the event, which came together quickly after he received positive feedback from the community. 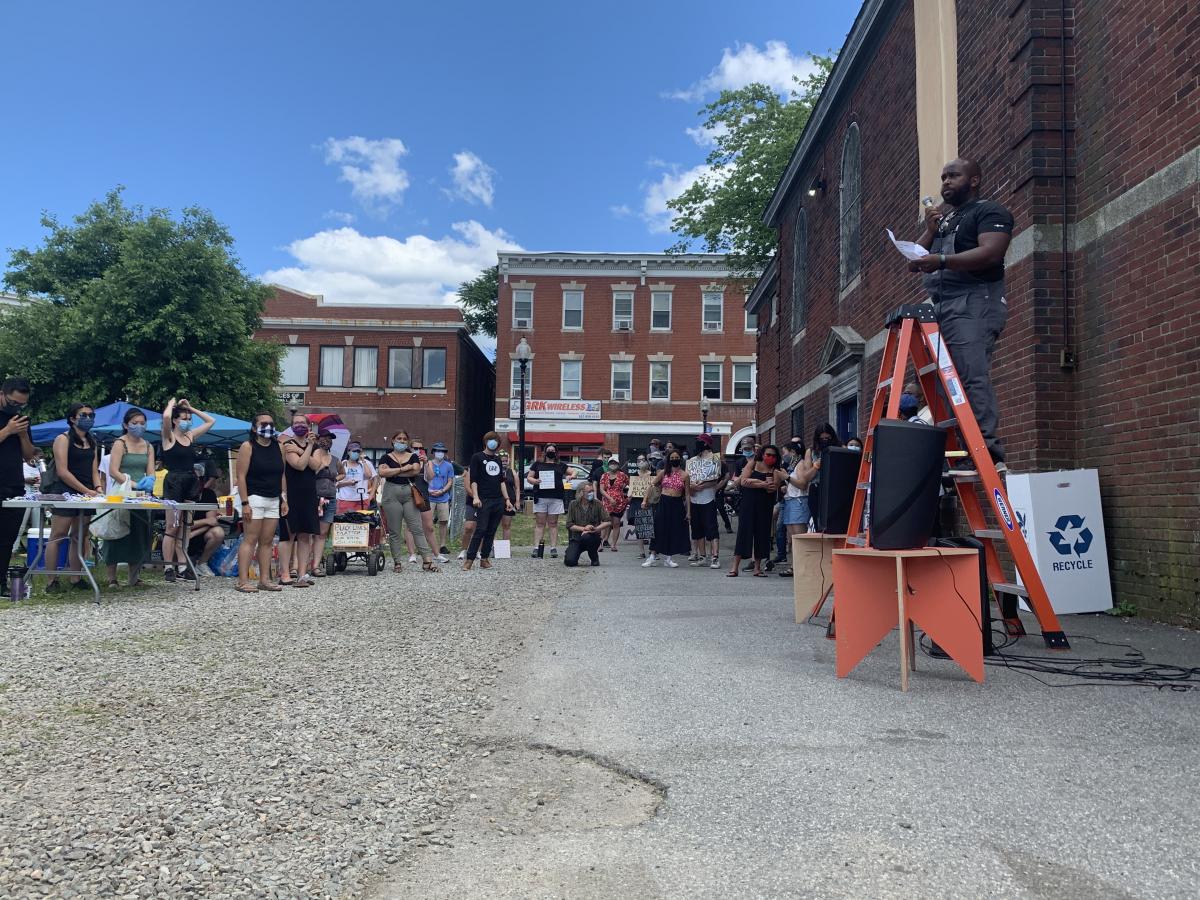 Event organizer and host Joel Richards, right, addresses the crowd from a stepladder.

“A couple community people asked me why we haven’t had one in Dorchester yet, so I just started making some calls and everyone was saying yes. People started donating masks and food and water and everything, so I was like, man, we should just get it done. And Juneteenth is the perfect day for it. As I said before, it’s about delayed liberation. Those people weren’t granted their liberation until two years after they should have gotten it. Consistently, black people have advocated in the spirit of Juneteenth for constant liberation.”

In addition to the speaking portion, the rally included a handful of information tables, art installations, and a free sign-making crafts table staffed by volunteers from the nearby Dorchester Art Project. 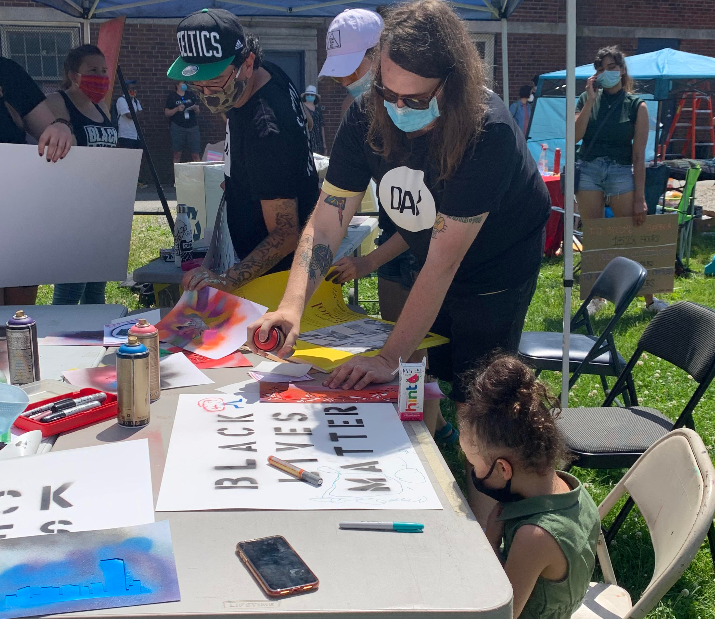 Dee Davis, an activist who lives just blocks away from Town Field, spent much of the rally near the park entrance soliciting petition signatures for “Blue Crime, Blue Dime,” her new initiative aimed at ensuring police officers and precincts who commit acts of brutality or racism are financially liable. Currently, legal fees and bailout sums for police officers accused of misconduct are funded by taxpayers, explained Davis.

“With George Floyd,” she offered as an example, ”the police have their own private insurance. The insurance company sees that video of Derek Chauvin putting his knee down on [Floyd’s] neck, which is an unauthorized tactic by the force. When they see that video, they go, ‘We’re not going to cover you for any damages.’ So that means if the city sues him or the family sues him, that money has to come out of his own pocket...right now, we pay millions of dollars for their settlements. When they killed Eric Garner, we paid millions. And legal fees too, that’s all paid for by us. So what we want is, they [the offending officers] have to pay for it if they’re found guilty.” 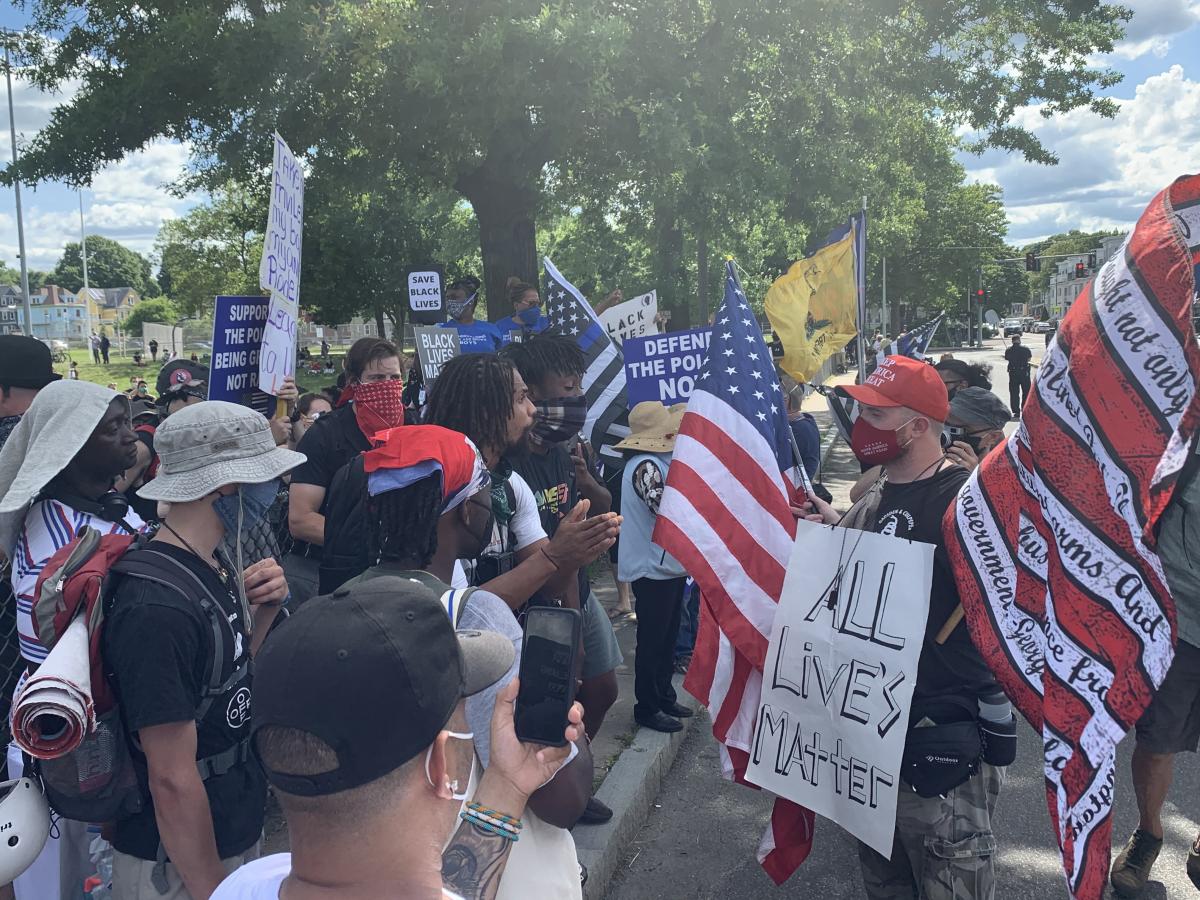 A rally goer attempted to reason with a counter protester just outside park grounds.

A flashpoint emerged briefly toward the end of the event as rally goers confronted a small group of protesters gathered outside the park, who were waving “thin blue line” flags and holding signs reading “All Lives Matter.” An argument began between the two parties, with rally goers breaking into chants of “Black Lives Matter.”

Richards, meanwhile, urged the crowd to ignore the counter protesters and not engage. The situation deescalated soon afterward as the dissenting party left the scene.

While many in the diverse crowd came from nearby neighborhoods, some also traveled from out of town to demonstrate support. Schuyler Ward, a 29-year-old from Salem, Mass., said he was motivated to come to Fields Corner by “a lack of justice for my peers,” citing a long history of violence perpetrated by police.

Sarah Fisher, who lives near the Four Corners area with her husband, Nil Silva, and children Nola and Jax, hoped the event was a molding experience for her kids.

“Obviously, first and foremost, we come from a mixed family,” said Fisher. “With my husband being Cape Verdean and living in Dorchester his whole life and having his own personal microaggressions and racist experiences, it’s important to us that the next generation does better and understands both sides of their culture. So we’re here, we’re just trying to instill in them that everyone has equal rights...we just want them to have exposure and see people taking a stand and know that they can advocate.” 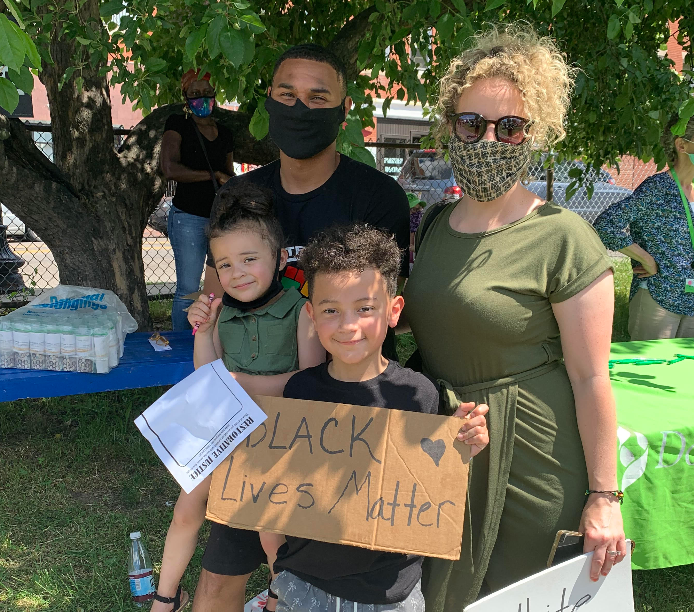 Dot residents Sarah Fisher and Nil Silva attended the rally with their children Jax, 8, and Nola, 4.

Silva said the scene at Town Field made him proud of his community.

“I get a sense of pride when I see something like this. You look around and you see every race you can think of, every hue or color that humans can come in seems to be here, and it’s all to unite to stand up for their countrymen, our equals...this is what a community is, this is what Americans are, you know? So I take pride in that.”

Fisher said they sat their children down that morning to explain what the holiday meant and the history behind it.

Jax, an eight-year-old second grader at Russell Elementary School, said he came “to be a part of fixing things and changing and bringing peace,” noting, “today is a really special day for a lot of people.”

Nola, 4, is still too young to fully understand what the rally was about, said Fisher. Still, she showed she was aware of the sociopolitical moment the country is currently experiencing when asked what she thought: