Warning that “time is running out” as they face a growing and “insurmountable debt,” two Catholic priests who lead St. Brendan and St. Ann parishes will ask Cardinal Sean O’Malley to merge the two Neponset parishes, while preserving both churches, under a new name.

In a letter dated May 10, Fr. Brian Clary and Fr. Bob Connors write that "we are asking the Cardinal to merge St. Ann and St. Brendan Parishes into one new parish retaining the two worship sites.”

“This letter is to inform you that we are in a high-risk financial situation threatening our sustainability and causing us to make a difficult decision regarding the relationship between the two parishes – the same challenge being faced by many parishes in the Archdiocese,” Clary and Connors wrote. “For the future of the Catholic presence in the area this action must be taken.

There have been clear warning signs that such a merger might be inevitable. Clary and Connors have worked with lay leaders over the past two years to confront a growing debt and deferred maintenance problems. Parishioners mounted a vigorous public campaign to raise funds and attendance in response.

“It’s projected each parish will lose $7K-$8K a month and could run out of savings within a year or so,” the priests wrote. “We need to prepare for where we expect to be a year and a half from now, because the deficit in finances and the deterioration of buildings continues. Asking the Cardinal to approve a merger is moving forward in a positive and proactive way.

“We were not sent here to close the parishes, but just the opposite, to do what we could do to keep that presence,” Clary and Connors added. “Finances were strained; repairs increasing; most of all, participation was dropping.”

“We feared that a major unforeseen expense would be a problem. Who would have ever expected that a pandemic would force us to this hard decision?” 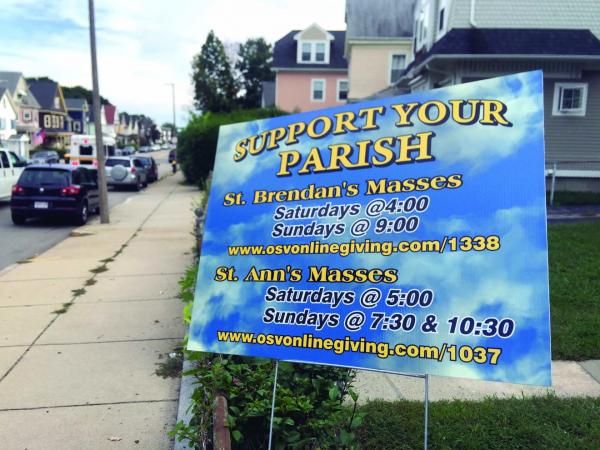 The merger will mean a new parish name that has yet to be determined, the priests say. The request for a merger is “critical” to St. Brendan’s school, they say, since if the parish were to shutter, the parish school— which operates independently of the St. John Paul II Catholic Academy system— would also close.

“If the parishes merge, the new parish assumes the responsibility for the school,” Clary and Connors wrote, adding: “The new parish can sell properties to address the debt and deferred maintenance.”

“We are aware there will be negative reactions to this change. We know the emotional depth of both communities for their parish. We fully appreciate that merging is difficult to accept,” they wrote. “Above all, we are very sorry to bring this matter to you during the COVID-19 crisis. It is not the best time, but we have no choice. Time is running out.”