At Cristo Rey Boston High School on Savin Hill Avenue, new and returning students were welcomed into classrooms for in person learning a month ago, on Aug. 17, the school’s usual start date. The private Catholic high school is currently operating within a hybrid learning model, with about half of the 220 enrolled students exercising the option to learn from home instead.

“Each student can be in the building three days and be remote two, but only about fifty percent of the students are choosing to come in at all,” said school president Rosemary Powers.

Part of a Jesuit-founded network based in Chicago, Cristo Rey Boston is one of the system’s 37 college prep schools in place across 24 states that exclusively serve students and families with limited resources. It offers students a rigorous curriculum, a distinctive work-study program, and the support of an inclusive community.

In an interview, Powers acknowledged that the juggle of teaching both in-class and remotely has been a challenge.

“It’s hard for our teachers,” she said. “They have 10 or 12 students sitting in front of them in the classroom and then 10 or 12 more who are logged in and they can see them on the computer screen. I’ve definitely heard from teachers that it’s super hard work and that they’re stressed.”

The school building, which formerly housed the elementary school of St. William’s parish, does not have an HVAC filtration system. “All the vent systems and fans have been cleaned and all of our windows are open,” she said. “We’re following state and city guidelines as well. Everybody has to wear a mask, surfaces are frequently sanitized. We’ve spent a lot of time cleaning the building. It’s an old building and it’s never looked cleaner.”

Cristo Rey phased in students slowly last month, starting with a grade a day. They have since ramped up the schedule. Students are learning remotely on Mondays, and those who opt to return to the building rotate throughout the week with three grades in at a time.

Powers said that staff and administration had been preparing for a school reopening since June. “We set up a Covid-19 task force way back at the end of June that had been meeting weekly all summer. We’ve also had a lot of professional development available for teachers that they’ve been able to take advantage of all through the summer.  Last year, we pivoted very quickly to the remote model, so we feel like we actually have some experience.” 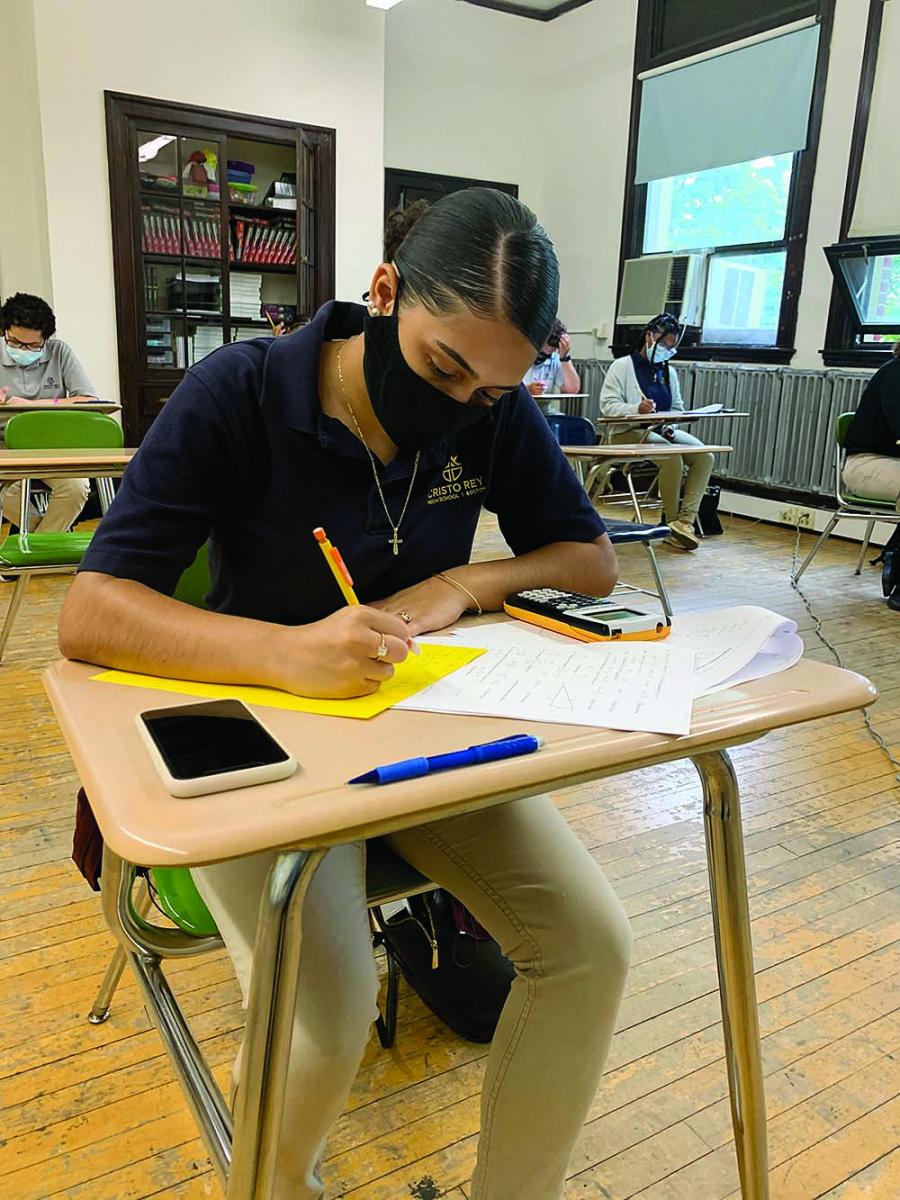 A scene inside a classroom this month.

Administrators and staff are taking extra precautions, often staying in their offices while in the building and hosting meetings via Zoom instead of gathering in small spaces. And while the weather has been warm, teachers have seized opportunities to bring some of their classes outside.

“It’s hard on those kids keeping those masks on all day, from the time they walk into the building until they leave,” said Powers. “We try to do mask breaks where people can stand six feet apart out into the yard. They’re high school kids. They’d like to be closer to their friends so we’re focused on constantly reminding them of the importance of social distancing and keeping masks on. They’ve done really well, so we are pleased, but we also know that it’s tough.”

The school’s financial model is built on its corporate work study program, through which each student works one day a week with a “corporate partner,” said Powers.’ “Every student goes out to work one day a week and that $10,000 per student pays half of their tuition, and we fundraise for the rest of it. In a typical year, we raise $2 million just through straight philanthropy, and through corporate work study we generate $2 million from the kids being out and doing work.”

Although the program is still intact, Powers said the school has taken a hit in the crisis and has launched a fundraising campaign in an attempt to make up for any losses.

“Our model is tossed on its head this year. We do have some fabulous partners who have decided to support us anyway. They’ve written a check and decided that students can come into their offices when they are back in their offices sometime next year. Other corporate partners have said they would try to employ students virtually.”

She added: “But some just aren’t able to afford it this year, so we’re finding that instead of raising the $2 million that we would typically raise in a year, we need to raise about $3 million.”

The seven-week funding campaign is called “Bridge the Gap” to fill the need. “We’re going to highlight students, some corporate work study partners, and keep pushing out info every week.”

Annual tuition is $9,000 per student, and the campaign urges donors to support a student for a year but also welcomes donations at incremental levels.

The Shah Family Foundation and the Catholic Schools Foundation have each donated $250,000 and Powers said the campaign hopes to match that support.

“We have a total of 112 students who need support. We’ve taken care of 56 of them through those generous gifts. And we have 56 more kids to support,” she said.