Construction continues this month at Garvey Park, which is in the latter stages of an extensive, $5 million renovation that is now scheduled for completion in November. Daniel Sheehan photo

Several city-owned parks in Dorchester are under construction— or nearing completion— this season as projects have resumed following brief disruptions to work and community meetings caused by the pandemic. Although most Boston Parks and Recreation operations ceased in mid-March, meetings were back on track in a virtual format by mid-April and construction came back a month later.

Work has recently been completed on a nearly $1 million renovation to Downer Ave. playground on Jones Hill. New amenities include an amphitheater, a dog park, and other changes meant to maximize use of the small space.

Next up, a series of updates to Dorchester Park that are scheduled to be completed by the end of this month will maintain the central climbing structure while adding new sets of swings and even an ADA accessible drum set.

The completion of a more than $5 million project at Garvey Park in Neponset will follow in November, fixing major drainage issues and creating lookout spaces, a dog park, and increasing shade and accessibility.

The interruption earlier this year pushed back completion dates for a few local projects, said Parks Commissioner Ryan Woods, and forced the department to adapt to a new community meeting process, which has presented both new access opportunities and new challenges.

“Although the transparency is great because people can Zoom from their home and they don’t have to worry about child-care to get to these meetings, we still want to make sure we’re hitting on all equity measures,” said Woods. “Not everybody has broadband access, not everybody has access to get to a computer or onto wifi, et cetera. So we really want to make sure we’re offering many ways –whether it’s people calling in or putting stuff online or getting on a Zoom – that we’re getting the most feedback we can for each of our projects...everything’s really done through that community process, so that transparent engagement process is really crucial for us to understand what are the needs for the community.” 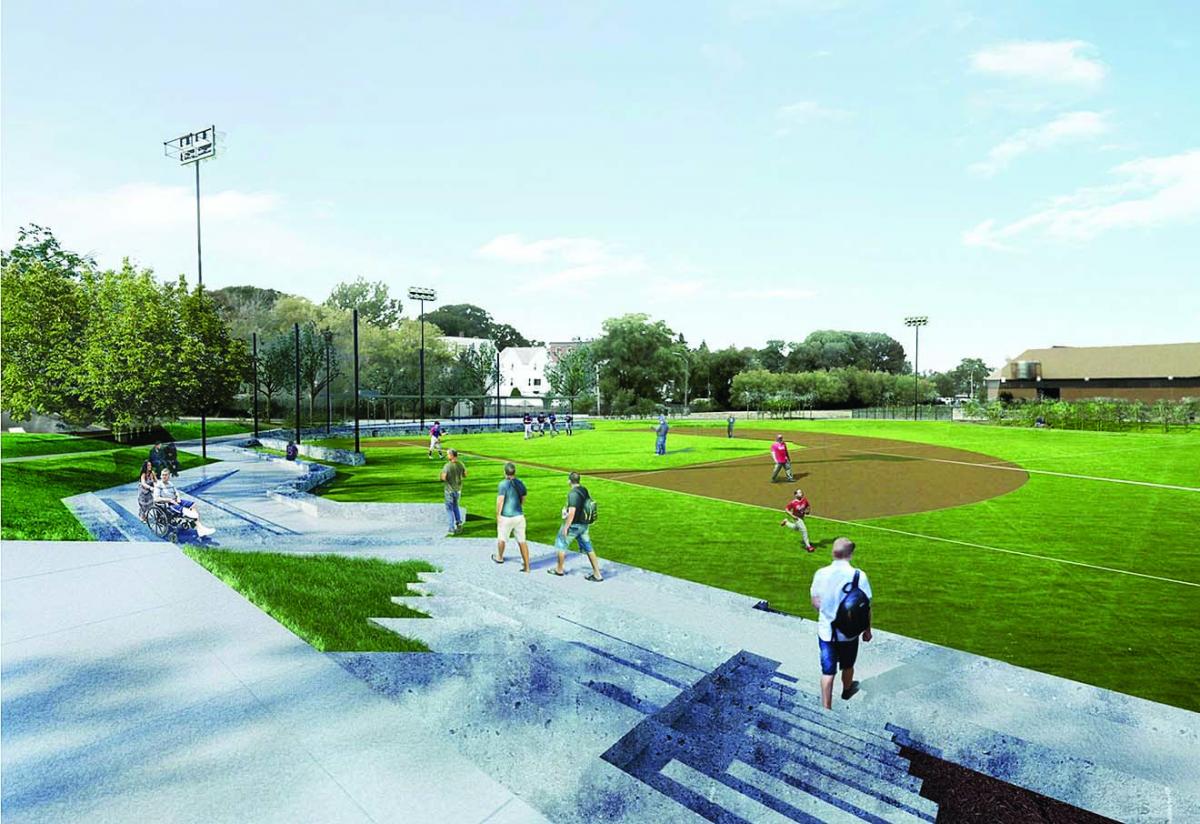 A rendering shows what the park will look like once work is finished. Rendering courtesy city of Boston Parks Dept.

Another handful of projects are slated to either begin construction or planning meetings in the upcoming months and are expected to be completed before next summer.

Phase 3 of a multimillion-dollar transformation of Harambee Park on Talbot Avenue will begin in a few weeks, adding football fields and pathways to the largely-finished soccer fields, drainage improvements, amphitheater, and pedestrian walkway at the space.

A renovation to Doherty-Gibson Playground at Town Field in Fields Corner will go out to bid this winter for spring construction, said Woods, and will include new play equipment, accessible entrances, fencing, and efforts to make the space cooler by adding water play features and plantings to provide more shade.

Similarly, bids for an $8 million project at McConnell Park in Savin Hill — which would freshen up the site’s Little League fields and rework the parking lot and traffic flow— will go out this fall.

And a complete renovation of Ryan Playground in Savin Hill, slated for next year, will begin design meetings this fall.

Woods said the wide scope of many of these projects reflects the Walsh administration’s commitment to a thorough reworking of the neighborhood’s green spaces.

“In the past, the department used to do a lot of one off fixes,” he explained. “This administration is taking a more comprehensive look, so it’s more than just one court or one field. We’re looking at multimillion-dollar renovations. Sometimes parks are one of the first things cut, so we’re fortunate to have a mayor involved who grew up in parks and understands the approach we’re aiming for.”