Community health centers continue to bear the brunt of screenings and containment efforts in Dorchester amid a worsening COVID-19 emergency. Stan McLaren, President & CEO of Harvard Street Neighborhood Health Center, said Friday he is proud of how quickly his staff has adapted to a rapidly changing situation.

“I think the biggest thing is that stuff just keeps changing so fast,” said McLaren. “You try to forecast and plan out, but the way this has been moving— normally you plan by the month or by the week, but now it’s hour-by-hour.”

Like other community health centers around the neighborhood, Harvard Street has become part of the “front line” in the pandemic. The Blue Hill Avenue facility is doing pre-screenings before anybody walks in the building, checking for elevated temperatures and other symptoms. Once inside, anyone exhibiting symptoms is directed to a “triaged” section where they are isolated from other patients and general staff.

“We’re putting as many protocols in place as possible,” said McLaren. “We’ve spent money retrofitting the health center with plexiglass. We temporarily shut down our dental department and redirected other areas to make sure those on the front lines have the resources they need.
“Governor Baker has talked a lot about preparing for this surge that will hit hospitals,” said McLaren. “We’re that initial front line to prevent that surge coming to hospitals and getting overwhelmed.” 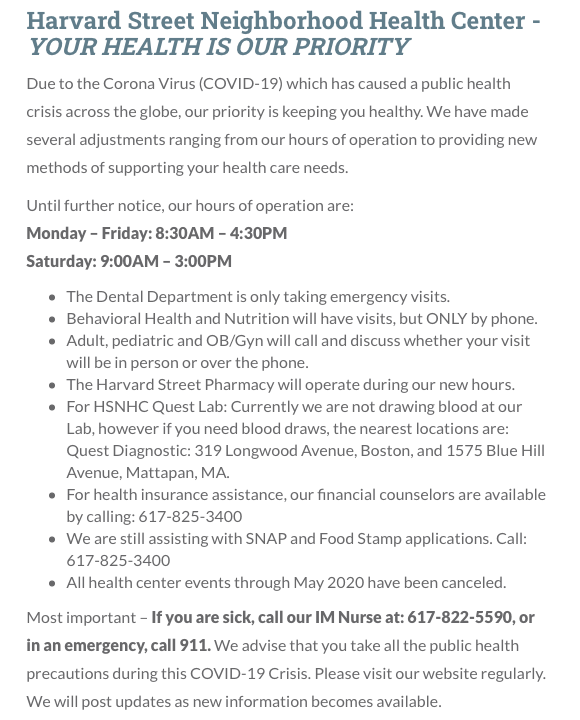 Among the many adjustments, Harvard Street has begun embracing telehealth as a means to continue providing care, particularly in the realm of behavioral health, said McLaren.

“I should give kudos to Secretary Sudders and Governor Baker. This has been a game changer. The population we serve has many barriers accessing care, and [authorizing telehealth] lifts that barrier,” said McLaren.

“We’re trying to keep people at home so they’re isolated. This allows us to do that. On the behavioral health side, there’s a level of anxiety going on with COVID, and this allows us to help with that anxiety. Even before this, there was a stigma around behavorial health, and [telehealth] creates a situation where we’re breaking down that barrier of stigma or denial, and try to prevent those issues being further exacerbated.”

In addition to the wide range of health services Harvard Street Neighborhood Health Center provides, the facility is also home to a food pantry that many in the community depend upon. That need has only increased in recent weeks, said McLaren, who noted “an uptick in families” at the pantry.

“We’ve got some of the poorest zip codes in Boston,” said McLaren. “Our folks can’t go and stock up like you see on TV with the stores being emptied out, you know, they’re coming to us. We’re associated with the Greater Boston Food Bank, but we still have to pay for the food that comes in. So we’re having to not only redeploy resources [to other areas], but on top of that use resources to purchase food to make sure pantries are stocked up well, especially with unemployment hitting. We want families to stay home and stay isolated, but we have to make sure we have the proper amount of supplies so they don’t have to keep coming back.”

“Making sure we’re able to cover costs is very important,” he said, adding that a measure for unemployment insurance relief was a “very good thing.”

As Harvard Street braces for what may be the peak of the COVID-19 crisis, McLaren said any extra PPE (personal protection equipment) donations are welcome, but even welcome are donations to the health center and its food pantry. Those interested in making a contribution can do so at harvardstreet.org.

“This disease is impacting all of society. It does not discriminate. We have a very vulnerable community we’re serving here, and we’re doing so while operating on thin margins. But we have to make sure this front line stays in place. We don’t want this to crack.”

McLaren added that he is extremely proud of his staff.

“They’ve been changing on a dime on some of this stuff, and we’re asking them to be in harm’s way. They’re making sacrifices, they’re agreeing to be redeployed in certain areas, and they’re doing this while they have their own stressors and families to worry about,” he said. “The human element to this, the toll and how people are reacting and stepping up is my biggest takeaway.”