In an era when many feel physically and psychologically absent from society due to the secluding forces of the pandemic, Dorchester recording artist Cliff Notez and Boston-based producer Dephrase have given us music for our times with their new EP, “Social Absence.”

While parts of the three-track project were recorded and conceived years ago, Notez wrote many of the lyrics and Dephrase finalized the structure of the EP over the last several months, making the work — both thematically and sonically— forever tied to our present quarantined reality.

The duo has collaborated in the past, with both recalling an “instant” kinship when they met for the first time years ago. That spiritual connection, along with shared struggles with mental health, laid the framework for the joint project, explained Dephrase (aka Daniel Babai):

“My parents are from Brazil and Iran, and I think as first-generation kids of immigrants, there’s a lot of stigma around mental health. That drew us together too. There was an immediate connection; as soon as I met Cliff, I felt like I’d known him since before I was born.”

Notez, whose parents are Haitian, agreed, noting that similar personalities meant they were already familiar with self-isolation in the pre-pandemic world. “We both have our struggles with mental health and social anxiety, so this idea of social distancing is something that wasn’t foreign to us before quarantine,” explained Notez. “I think the fact that we’re here and can talk about it speaks to our resilience.”

Having studied both music and psychology in college, Notez has a penchant for using his music as an exploratory vessel to dissect his own emotions and neuroses. On his 2019 album “Why the Wild Things Are” and in an accompanying multimedia art exhibition called “Into the Wild,” Notez examined the effects of bipolar disorder and other mental disorders. As such, much of the lyrical content on the EP is about exploring, working through, and attempting to overcome mental illness.

On “Voodoo Doll,” the EP’s stunning opener, guest artist and Fields Corner-bred rapper/producer Latrell James tells his own stories of struggle.
“I feel all your pains lately, all your stresses and depression on your brain lately,” empathizes James, before admitting: “Lately I ain’t movin’ how I wanna move.”

In the song’s hook, a warped version of James’s voice —which producer Dephrase described as ‘roboticized’— sings, “You’re a voodoo doll, you don’t know who you are no more.” The imagery of a humanoid figurine repeatedly subjected to pain, yet at the same time disassociated from or numb to the suffering, illustrates the alienating effects of depression.

Notez then bursts onto the track with frantic energy and rich imagery of penning rhymes in a composition book on “a train from Sullivan to Ashmont.” Notez’s skittering flow skips in and out of pocket as he grapples with his ever-changing demons: “I used to be depressed, but your boy hyperactive./The doctors call it manic, but I call it the artistic standard.”

He goes on to explore how his traditional upbringing shaped his relationship with mental health. “Haitian, but this voodoo takes a little bit of patience,” he rhymes.

“Mental health in Haitian culture is treated so differently,” said Notez, recalling a recent conversation he had with a Haitian elder in which he made a connection between what the elder called being “possessed” and symptoms characteristic of schizophrenia.

“I realized how religion could be a way of processing something out of the ordinary,” he said. “I used to look down on it as a way to discredit mental health, but in a way it can be used as a metaphor to understand what’s happening. It took me a long time to understand that, and I’m still exploring how my identity is wrapped up in it and the complexity of that.”

The sonic topography of Voodoo Doll is almost itself manically bipolar: it starts lethargically with James’s verse before abruptly shifting to double time and growing in momentum until it reaches a chaotic climax, only to suddenly dissolve into an ethereal wash of sax and reverb.

Dephrase, who often crafts similarly shapeshifting instrumentals, said Notez’s versatility fits his style naturally. “Cliff is one of those few people who can take all those sporadic shifts and lean into them,” he explained. 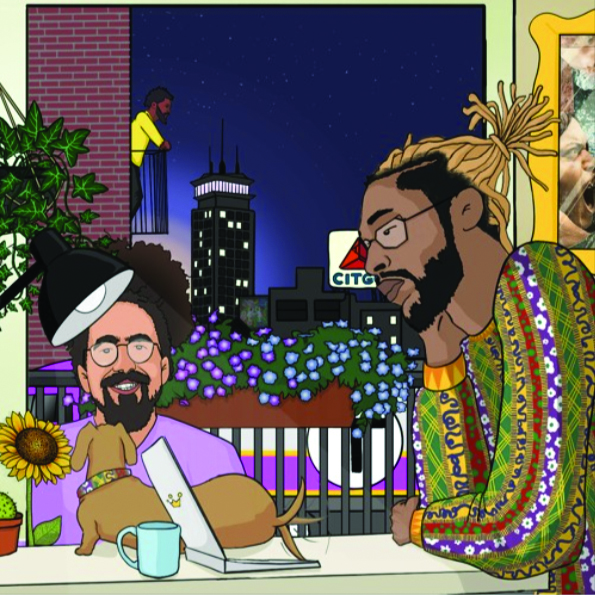 The cover of the "Social Absence" EP depicts Cliff Notes, right, and Dephrase, left, in an illustration by Nick Martin. Fields Corner born-and-bred rapper and producer Latrell James is shown on balcony.

On the second track, “Spiral,” Notez grieves for “a world gone viral” and expresses frustration at an antagonistic relationship with his phone.

“It’s like a hate/compromise relationship,” said Notez, describing how the device causes him stress but is also necessary for managing and promoting his music. “It’s a tool. I think about it like a power drill.”

The song features some creative production from Dephrase, who explained how a cardboard box offered him acoustic inspiration.

“I’m inspired by sounds, and I love having weird textural things in my music,” he explained. “One day I went to pick up a cardboard box of sparkling water and was fascinated by the sound it made. So, I got another one, punched my hand through the handle, did that right in front of a mic, and that was a basis for a lot of percussion sounds on that track.”

“Repeat,” the third and final track, captures the monotony and tedium that accompany stay at home orders and a work from home lifestyle.

“Wake up, work, stress, sleep, cut, copy, paste…” drones Notez at the start of the song, lulled into a stupor by the brainlessness of routine. That numbness squares with what Notez sees as a growing sense of apathy and helplessness in those around him:

“The world’s falling apart, but I guess it isn’t an issue/Guess we die every day so let’s pretend that’s casual/Let’s make believe this simulation is actually factual/And the world run on something practical outside of capital.”

Notez chalked up his cynicism to what he called a “hyperawareness around the commodification of racial justice. Now it’s the trendy thing to be woke, and that’s how most brands are selling products.” Even as companies embrace racial justice movements and endorse movements like Black Lives Matter, their motivation in doing so should be questioned, he explained. “We don’t know if they truly mean it.”

A later verse illustrates other realities of a changed world: a “spotlight on an empty stage;” a “silent crowd.” An indefinite hold on live, in-person concerts has been painful, but it has also forced the music industry in new directions, said Dephrase.

“As a producer and engineer full-time, live shows are a big part of making my living, and I’m seeing a lot of my friends suffer from this...but a silver lining is that people are really starting to embrace the technology we’ve had at our disposal. I think it’s given us an opportunity to connect to audiences in different ways.”

For as much as the pandemic has shaped certain processes, the duo pointed out that “Social Absence” would have been recorded the same way —remotely— even before COVID, with Notez and Dephrase working independently and exchanging audio files. In fact, watching much of society transition to a more sequestered, introverted lifestyle — one he had grown accustomed to years ago— has made Notez feel a bit like a trendsetter.

“A lot of people struggle with being alone, but the more positive part of that is there are beneficial sides if you do it in a healthy way. For me, quarantine has been kind of like the rest of the cool kids coming over to the nerds table, and we’re just like, it’s actually not that bad over here!”