I attended the evening protest on June 2 in Dorchester’s Franklin Park and on surrounding streets. It was – from what I saw – a peaceful and positive event.

Those who organized the rally — Black Lives Matter’s Boston chapter and the activist Monica Cannon Grant, founder of Violence in Boston — should be commended for helping to make it that way.

From my vantage point, questionable deployments by the Boston Police Department led to tense moments that could have been avoided.

I arrived shortly after 5 p.m. at the Blue Hill Avenue entrance to the park, where demonstrators were staging an eight-minute, forty-six second “die in” meant to symbolize the amount of time Minneapolis police officer Derek Chauvin kept his knee on George Floyd’s neck as he slowly murdered him.

Then, the crowd began marching into the park down Circuit Drive, with organizers warning protesters about the presence of BPD and National Guard soldiers and firmly discouraging any form of aggression or provocation.

“We don’t want another black person to die here today,” said one organizer into her bullhorn.

Protesters held signs aloft and participated in full-voiced chants as they proceeded through the park, shouting “I can’t breathe!,” “Hands up, don’t shoot!,” and calling for the ousting of “racist cops” while invoking the names of George Floyd, Breonna Taylor, Tony McDade, and other victims of police violence.

The diverse but predominantly white crowd was overwhelmingly comprised of young people.

A smattering of adults and older people also marched, and some families with young children and elderly couples observed and showed support from the sidewalks, brandishing signs and handing out snacks and bottles of water.

Most of the people I talked to seemed to be from outside the neighborhood: Jamaica Plain, Allston, Rhode Island-— but Dorchester, Roxbury, and Mattapan were well represented, as well.

They highlighted a resolution Pressley was pushing in Congress that condemned police brutality and introduced reforms to police oversight and accountability standards. (The city council passed a resolution the next day in support of Pressley’s efforts.) 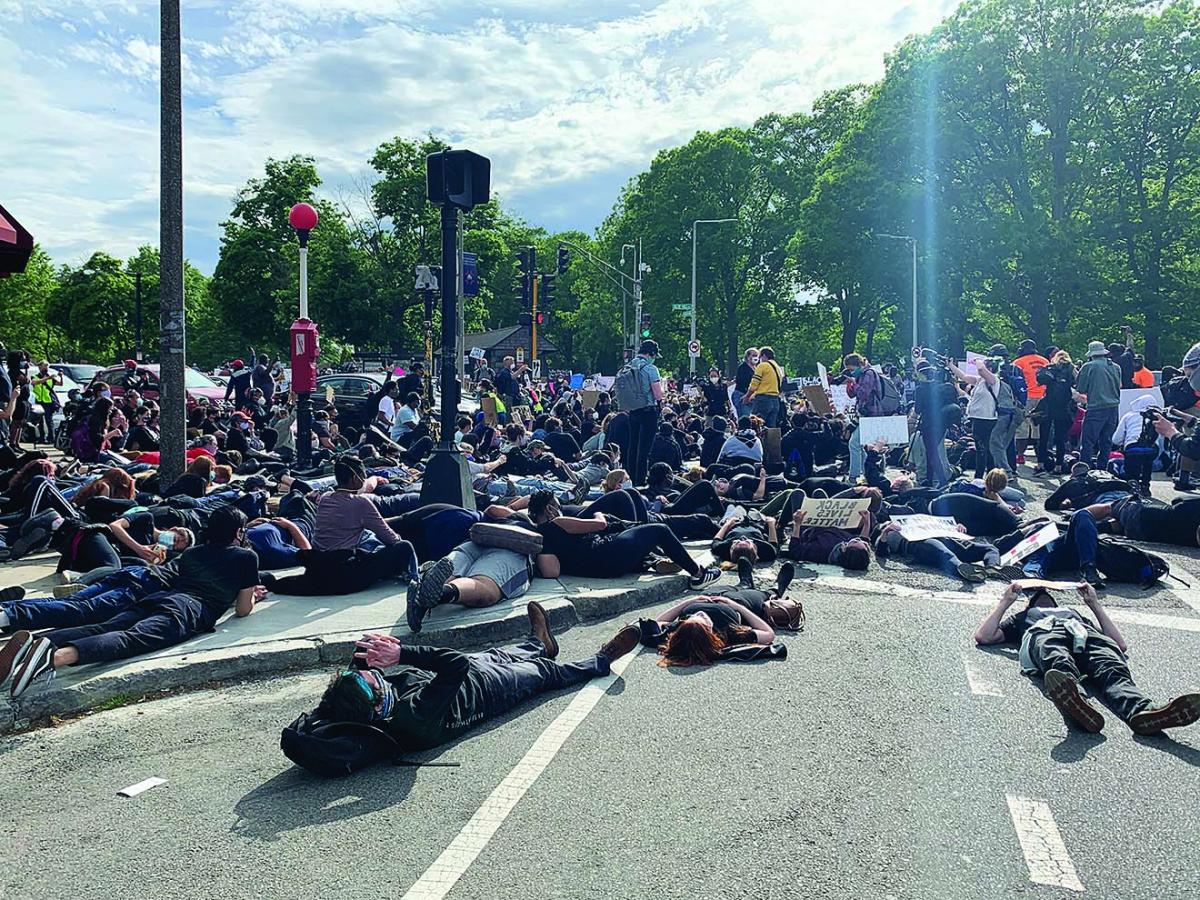 The scene at the corner of Blue Hill Avenue and Columbia Road on Tuesday, June 2, as people lay down in the street to protest the killing of George Floyd.

As the rally ended, organizers instructed the crowd to exit peacefully along the same road they entered so as to avoid police. Yet as the protestors followed instructions, a single file column of some 50 BPD officers on bicycle, motorcycle, and in police vans began to make their way through the throng and toward the hospital. Confused protesters parted to let the motorcade through, but when one individual attempted to stand his ground, he was clipped on the shoulder by a passing motorcycle. He said he wasn’t injured, just stunned.

The crowd, thankfully, showed restraint and remained relatively calm as the police came through. But the situation easily could have become a troublesome event at a gathering that had been — to that point— entirely non-confrontational.

District Attorney Rachel Rollins told protesters on Boston Common on Wednesday that she ran on a platform aimed at reducing arrests for low-level crimes because “they reduce interactions with law enforcement, which can change in an instant” and “are not de-escalated often.”

Rollins pointed to George Floyd’s murder as an example, a tragedy that escalated from allegations of Floyd using a fake $20 bill. The relationship between police and constituents is shaped largely by these types of interactions, which can often be negative; the BPD’s championing of “community policing” is aimed at addressing those very flashpoints.

In 2016, speaking at a conference at Boston College, then Superintendent-in-Chief William Gross called BPD’s approach “the number one community policing model” in the country. “This shows that Boston is not like other cities,” he said at the time.

For one of my first assignments at the Reporter, I took a ride along with C-11 patrolman Paulo Pereira.

Over the course of a few hours, he explained how his walking beat is centered in community policing, a strategy at the forefront of BPD’s work in recent years to build relationships with the community and develop an environment of trust.

From what I saw, Officer Pereira seemed successful in his endeavors. He greeted residents with a friendly smile, spoke everyone’s language, and helped to diffuse an argument over a $20 bill that could have escalated into violence, precisely the type of situation that Rollins was alluding to.

But even Pereira acknowledged building that relationship of trust is difficult: he talked about a dying man who refused to divulge information to him about his killer, and pointed to a similar mistrust he once harbored himself.

“Before becoming an officer, I didn’t like policing,” he said. “I had some bad experiences with the police, and I decided that if I don’t like it, I gotta do something about it. That’s why I joined.”

Here, I see a key parallel. Like Officer Pereira, the protesters taking to the streets across the country don’t like what they see in their police departments, and they’re doing something about it.

Boston’s leaders say our city — and our police department— should lead the country in reforming what is a broken system in every city, every state.

I can’t pretend to know what that reform process would look like for the BPD. But I do know that I saw fear on the faces of black protesters beside me on that Tuesday night when blue police lights began to flash in the middle of the gathering. For many black Bostonians, seeing a large police presence is never a reassuring sign; it’s seen as a harbinger of potential violence, rather than safety.

Addressing such expectations is the challenge that faces us as a city, as a neighborhood.