A Boston Police image posted to their external website showed what officers confiscated from a group of people on Astoria Street in Mattapan.

People expect to hear fireworks popping off in the summer months, especially around the Fourth of July. In Dorchester, Mattapan, and other city neighborhoods, residents can usually bet on hearing late-night blasts and seeing the sky light up, courtesy of their neighbors, for some of June and most of July.

But many residents said that this year in particular has been different – and upsetting – as far as fireworks are concerned.

“Last year I thought, ‘What are we going to do about this? I don’t see it getting any better.’ And here we are a year later with the covid-19 pandemic people at home and the fireworks definitely not going away. Everybody is all over social media about it.”

Mayor Martin Walsh said in a Wednesday press conference that number of fireworks complaints called into the city's fire departments was up by 2,300 percent from last year to this year in the month of May.

"When I saw that number I thought it was a misprint," he said, "from last May to this May the number of calls are up from 27 to over 650 calls... There have always been illegal fireworks in the city leading up to the 4th of July. This year it's worse than usual."

The Mayor said the police have been trying to keep up illegal firework enforcement, but added that they "can only do so much" He urged Bostonians involved in lighting off fireworks to think more seriously about the negative impacts they're having in their neighborhoods

"If you’re involved in this behavior, think about the impact you're having on the people around you and stop it-- think about the seniors, kids, and veterans frightened by this and losing sleep."

District 4 City Councillor Andrea Campbell said she and her office “have been fielding what feels like hundreds of texts, calls and emails, and seeing many postings from residents around the nuisance of fireworks ,which are now louder and going later,” she said. “I mean sometimes they’re going until 3 and 4 in the morning, and folks are concerned if they have young children, or loved ones with PTSD. It’s also been a problem for essential workers who just need sleep.”

She added: “In this climate many are reluctant to call the police, so some want to talk collectively with neighbors about how to get the problem under control. In some communities that’s been going really well, especially in communities of color where they’re thinking of creative responses.”

Campbell said that some residents have been innovative, organizing efforts to include landlords in Dorchester and Mattapan in conversations about how to deal with the at times nonstop fireworks being set off at or near properties.

Still, she said, sometimes the constant blasts are too much.

“When it’s very bad we do engage our officers who will go and confiscate, but there are a variety of ways people are attempting to get the issue under control,” she said.

Over the past week, Boston Police have been confiscating fireworks. On Friday, officers seized a truckload of them in South Boston after numerous calls and complaints.

According to a BPD report, the officers saw a group gathered in the parking lot of Saint Peter’s Church on Flaherty Way with several packages of fireworks in plain sight. Those at the site told officers they were unaware that fireworks were illegal in the city and state. “The officers confiscated all the remaining fireworks while taking the opportunity to educate and inform everyone gathered on scene that, in addition to the mandatory seizure, they could also face monetary fines for their actions,” the report stated.

On Saturday, officers responding to complaints of ongoing fireworks in Mattapan at 68 Astoria Street seized two large boxes of fireworks and made an arrest after finding two handguns.

Wesley Pereira, 25, of Dorchester was arrested after officers began seizing fireworks from two cars. The report said that officers discovered a loaded handgun on top of a pile of fireworks in one of two cars containing fireworks. They frisked Pereira and found another handgun. He will appear in Dorchester District Court to face several gun charges.

At-Large Councillor Julia Mejia announced on Twitter that she'll be hosting a virtual "Fireworks Trauma" community conversation on Thursday, asking residents to prepare their own solution-oriented ideas to solve the problem. 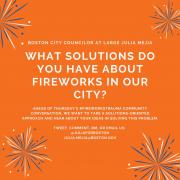 Savin Hill Councillor Frank Baker agreed that nonstop fireworks seem to be more prevalent in Dorchester this year than ever before.

“A lot of it might be attributed to the fact that people have been pent up during the pandemic,” he said, “Hopefully it doesn’t go through the entire summer. I think it’s a situation where our hands are almost tied, you know, because I think it’s a police issue. I’d be concerned about sending police into groups of people lighting fireworks off because I don’t think that the people that are already doing this are likely to listen.”