To the Meeting House: A sketch suggesting winter time in Puritan Boston.

Thanks in short supply for the Puritans in Nov. 1630

On Thursday, the aroma of roast turkey and all the trimmings will drift from Dorchester’s kitchens as Covid-wary families gather around dining room tables piled with all the fixings of the holiday. Three hundred and ninety years ago, however, Dorchester’s first English settlers sat at rude wooden tables not to feast and say thanks, but to stay barely alive.

The colonist Roger Clap wrote of the Mary and John passengers facing their first brutal New England winter in 1630-31: “In our beginning, many were in great Straits for want of Provision for themselves and their little Ones.” There would be no Thanksgiving for that beleaguered band of settlers clinging to their footholds near “Rocky Hill” (latter-day Savin Hill).

Atlantic gusts lashing the rough wooden cabins, “lean-to’s,” and shelters of Dorchester’s early colonists, and dipping temperatures all along the bay heralded a harsh winter. Having arrived too late to plant sufficient crops, the settlers confronted winter with meager stocks of “salt junk [meat] and hard-tack [rock-hard biscuit] left over from the voyage.”

With barely enough food for their own families, “Dorchester’s Freemen” had to “turn loose [their indentured servants] to fend for themselves.”

The colonists were more than willing to hunt in the dense local forests and to fish the waters teeming with cod and other fish, but were hampered by a range of problems in any attempt to level a musket at a wild animal or to cast a line into the ocean.

In a letter to his father back in England, a local man lamented: “Here [in Dorchester and Boston] is good store of fish if we had boats to go 8 or 10 leagues to sea to [go] fishing. Here are good store of wild fowl, but they are hard to come by. It is harder to get a shot than it is in Old England ...Therefore, loving father, I entreat you that you would send me a firkin [measure] of butter & a hogshead of malt...for we drink nothing but water....We do not know how long we may subsist, for we cannot live here without provisions from Old England.”

The renowned historian Samuel Eliot Morison notes that the drastic changes in the customary diet of the band from the Mary and John and the other Puritans who had debarked from vessels along Massachusetts’ shore was pronounced, weakening them by November and leaving them in poor shape to endure the coming winter.

“But the Englishman of that period considered himself starving without beef, bread and beer,” Morison writes. “And even today, if you will try a steady diet of shellfish and spring water for a week, you might feel some sympathy for these Puritan colonists bereft of their stout British fare.”

For many of the Mary and John settlers, one of the available foodstuffs — “Indian corn” — wreaked havoc with their digestive tracts. “There is one and another allusion to the fact that these people, bred to the use of English wheat, rye and barley,” records Chronicles of the First Planters, “disliked the bread made of Indian corn. They probably had not yet learned the art, which is not an easy art to this day, of properly subduing that grain by the process of cookery.” Cramps and worse bedeviled many settlers forced to rely on the harsh local corn as a staple. 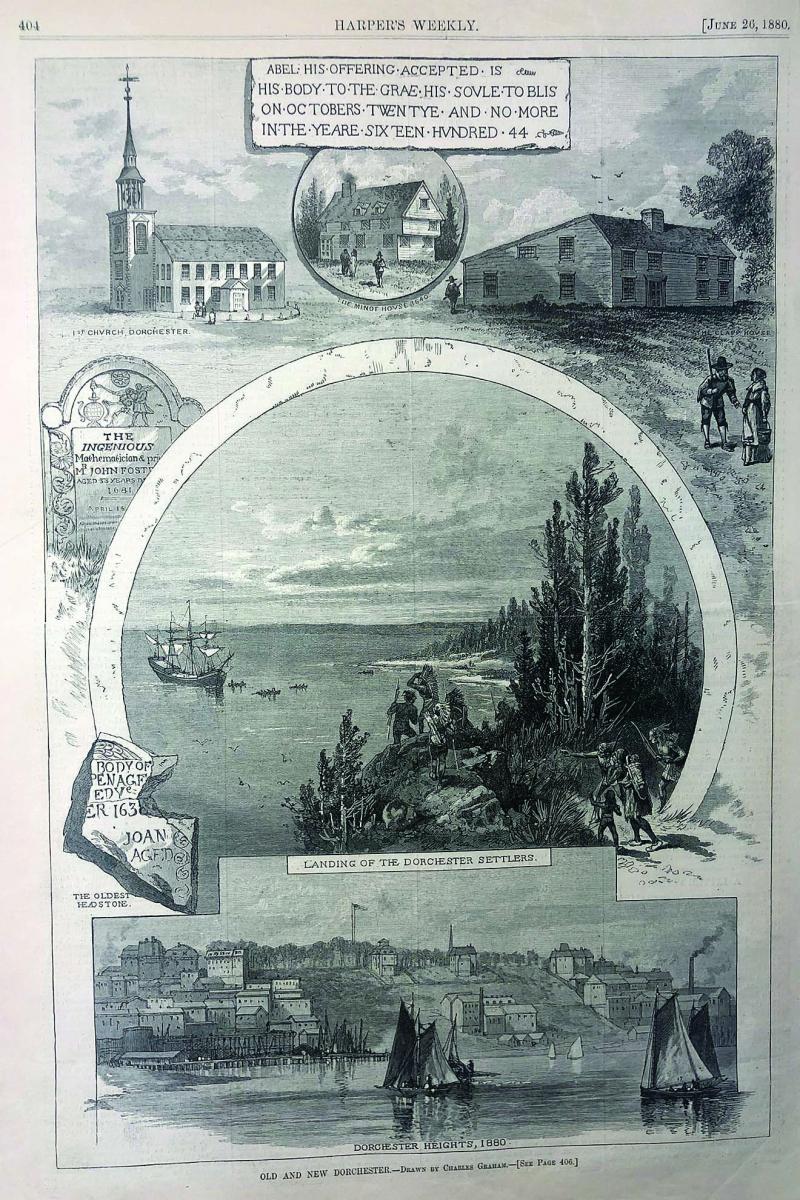 A page of illustrations in the June 26, 1880 edition of Harper's Weekly imagined and drawn by Charles Graham depicted "Old and New Dorchester," including the "Landing of the Dorchester Settlers" aboard the Mary and John at Savin Hill in 1630.

By late November 1630, many of the colonists foraging from the Neponset to “The Neck” for food were taking on a gaunt, weakened collective visage. Thoughts of any day of Thanksgiving were remote to men, women, and children alike. Thoughts of scraping enough food for the daily larder consumed the hours. And, as Chronicles of the Planters asserts, “as the winter came on, provisions began to be very scarce....and people were necessitated to live upon clams and mussels and ground-nuts and acorns, and these got with much difficulty in the winter time. Upon which people were very much tired and discouraged.” With hunger came two dread companions – scurvy and “a contagious fever, probably typhus.”

On Christmas Eve, temperatures plummeted below freezing, with icy winds roaring in from the ocean. Relentless snowfall soon piled upon Dorchester and the nearby settlements. As John Winthrop and other locals described, “many of the people were yet inadequately housed, living and dying in bark wigwams or sail-cloth tents, ‘soe [sic.] that almost in every family, lamentation, mourning and woe was heard, and no fresh food to be had to cherish them.”

Roger Clap’s words captured the incessant misery and deprivation that the Mary and John settlers battled day by frigid day: “Oh, the Hunger that many suffered, and saw no hope in an Eye of Reason to be supplyed [sic.] only by Clams, and Muscles [sic.], and Fish....Bread was so very scarce that sometimes I tho’ht the very Crusts of my Father’s Table would have been very sweet unto me. And when I could have Meal and Water and Salt boiled together, it was so good who could wish better?...It was accounted a strange thing in those Days to drink Water, and to eat Samp [mush] or Hominie without Butter or Milk. Indeed, it would have been a strange thing to see a piece of Roast Beef, Mutton, or Veal.”

The hardships notwithstanding, Clap battled his travails with stoicism and bedrock Puritan religious beliefs, as did many of the Mary and John contingent literally hanging on for dear life as the seemingly endless winter dragged on. “I took notice of it,” he wrote in his journal, “as a Favour of God unto me, not only to preserve my Life, but to give me Contentment in all these Straits; insomuch that I do not remember that I ever did wish in my Heart that I had not come unto this Country, or wish myself back again to my Father’s House.”

That tough-minded approach would carry Clap and many of his fellow Dorchester companions through the winter, ensuring that the fledgling settlement would survive.

In February 1631, Clap and company needed every last source of inner strength upon which they could draw, for their situation reached its desperate worst. Food stores had dwindled to virtually nothing, and profiteering was rampant — the princely sum of 5 pounds for a single pig and 3 pounds for a nearly starved goat the going rate.

Finally, in that grim February, a relief ship materialized in the waters alongside the Puritan settlements. The Lion, out of Bristol, England, was laden with supplies procured by one of Dorchester’s “guiding lights,” John White, and other supporters of the colonists. Among the most important items off-loaded from the vessel was lemon juice, “which cured the scurvy.” To the delight of the haggard colonists craving a bit of bread and meat, sailors rolled and lugged sacks of grain and “barrelled beef” ashore, as well as peas. Dorchester was one of “the several towns” receiving a share of the supplies. As John Winthrop noted, the Lion’s arrival was “the occasion for a February thanksgiving day.”

That Thanksgiving day for the settlers of Dorchester and the region was not a “Pilgrimesque” feast, but a day of prayer and reflection.

Roger Clap also offered thanks to another source of aid to the Dorchester Company: “Yet this I can say to the Praise of God’s Glory, that He sent poor raven-nous Indians, who came with their Baskets of corn on their Backs to Trade with us, which was a good supply unto many.”

This Thanksgiving, as families gather in Dorchester for turkey dinners, they might pause for a moment to ponder how blessed they are. Three hundred and eighty-two years ago, the town’s first colonists truly grasped how precious family and a full table were.

Peter F. Stevens is the author of more than a dozen books, including The Voyage of the Catalpa and Notorious and Notable New Englanders. He is a regular contributor to the Reporter Newspapers. A version of this article first appeared in the Reporter in 2001.