Celia McDonough with one of her portraits of iconic Dorchester scenes. Daniel Sheehan photo

This year, for the 26th year in a row, Neponset-based artist Celia McDonough has spent much of her free time toiling over the 13 watercolor portraits that will grace Project DEEP’s 2021 ‘Celebrate Dorchester’ calendar. The annual artworks have become collector’s items in the neighborhood since McDonough began the tradition as a fundraiser for Project DEEP (Dorchester Educational Enrichment Program), a tutoring and test prep non-profit started by her son Brendan in 1995.

The 78-year-old McDonough didn’t begin painting until her 30s, when she began taking workshops and enrolling in night classes at the Mass College of Art and Design. “I only paint watercolor, and that’s pretty much the only kind I’ve done for the last 40 years,” she said in a recent interview. “That’s what I enjoy.”

Her works capture the natural beauty and rich history of Dorchester, often evoking bygone eras or timeless landscape views. Certain go-to “fallbacks” include Dorchester Bay, the Walter Baker Chocolate Factory (you can do it from every angle and come up with something different, she noted), the Neponset River, and still-lifes of Dorchester pottery. 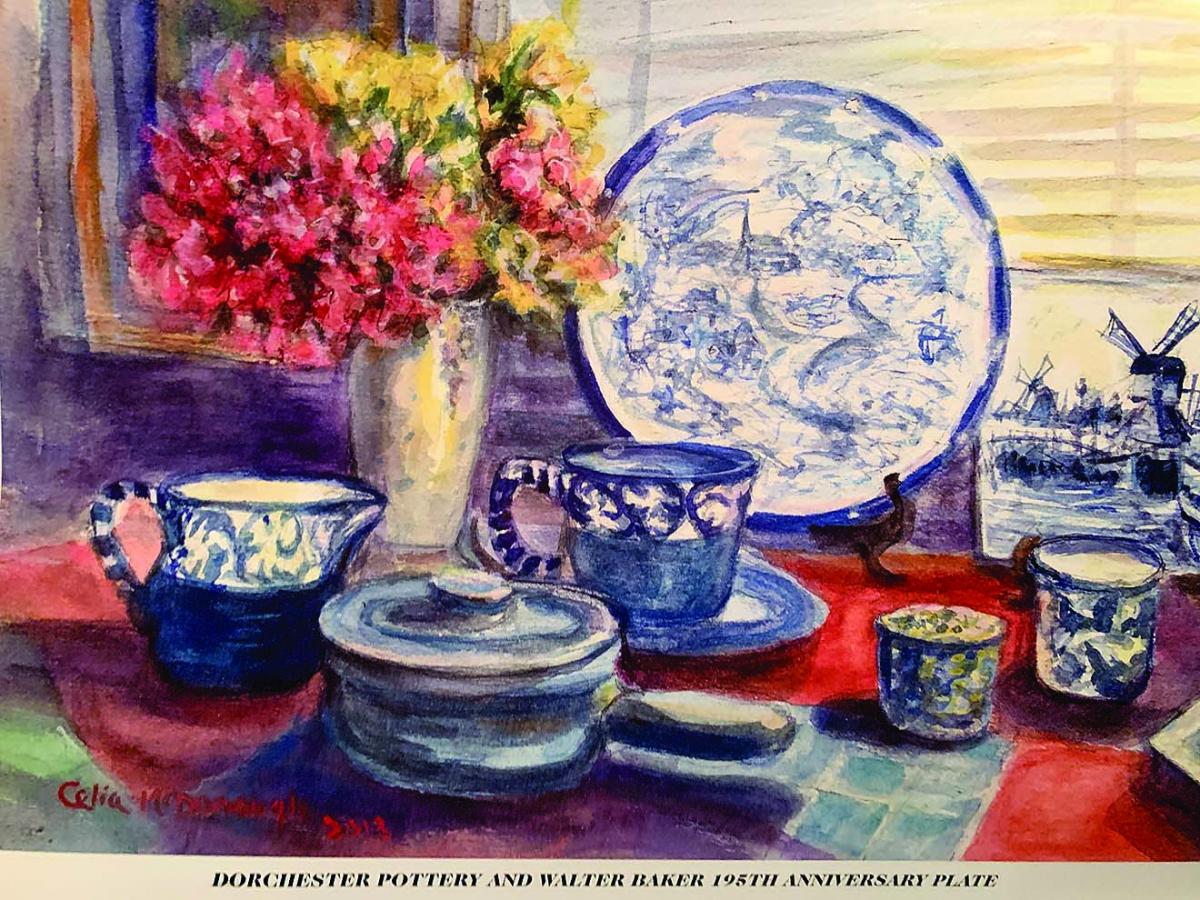 The distinctive blue and cream colors of Dorchester Pottery, which was made in a factory near Clam Point in the first-half of the 20th century, is one subject in Celia McDonough's calendar for 2021.

This year’s calendar includes past scenes of Meetinghouse Hill Unitarian Church, the Englewood Diner, and All Saints Church, as well as a scene depicting the “Remnants of the Seymour Ice Cream Factory” in Port Norfolk. Scattered throughout the calendar are fun facts and markers of important dates in Dot history. A member of the Dorchester Historical Society, McDonough consistently keeps an eye on the past, drawing from old photos or postcards and consulting with society President Earl Taylor for historical accuracy.

“In every calendar I try to incorporate some historical scenes. We have such a wealth of history here going back to the 1600s,” said McDonough. “This year for one of the months I took an old turn of the century black and white postcard of Ashmont Station, blew it up, and added my own colors.” 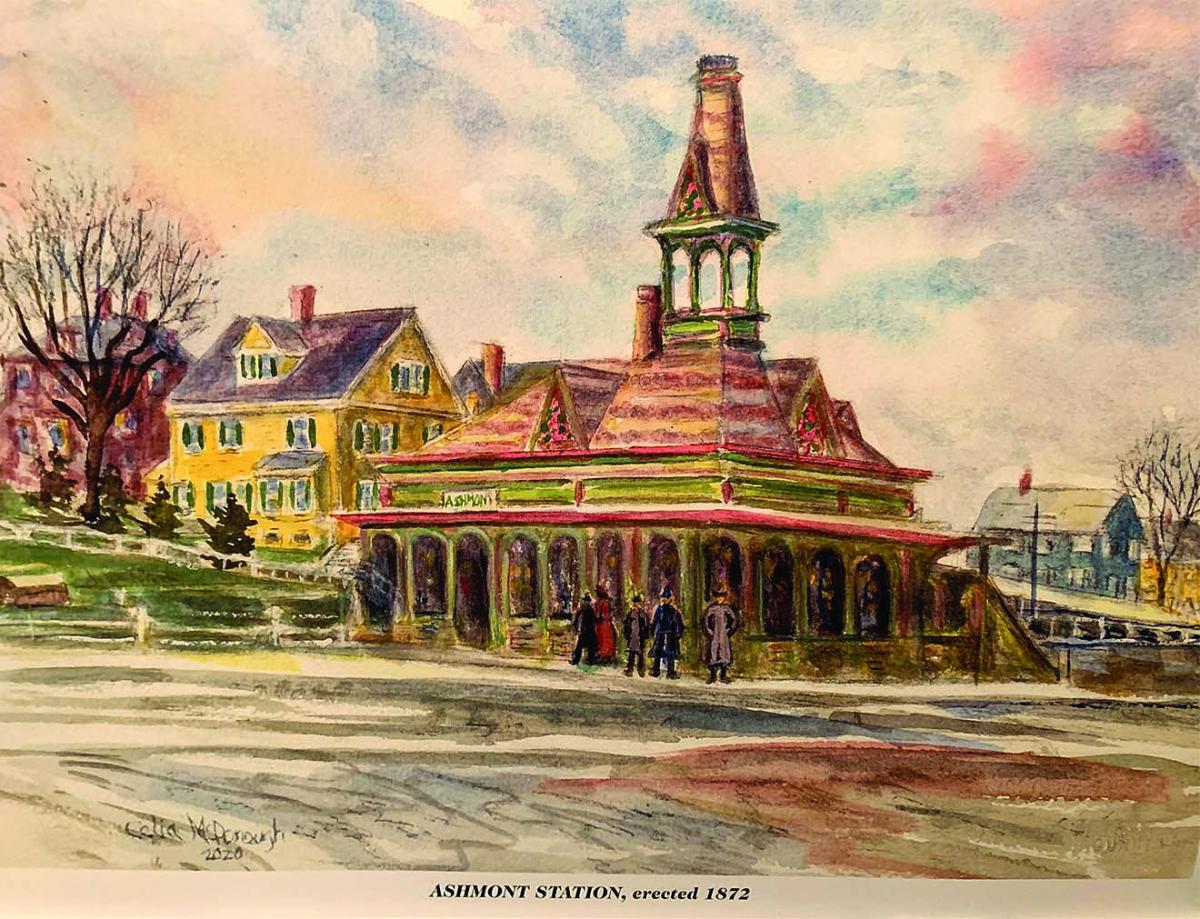 The 2021 calendar includes a depiction of an earlier trolley station at Ashmont, circa 1872.

McDonough will also paint scenes as they are today. “Usually when I paint the calendar, I keep a sketchbook in the car and if I see something I like, I’ll sketch it, then paint it, then finish in the studio later,” she said. “I’m retired now, so I just constantly paint, I’d say, four to five times a week. Doing a calendar is a year’s work, but none of it’s for profit. I just love it.”

The calendar is an important fundraiser for Project DEEP; Brendan McDonough estimated the annual sales make up as much as 10 percent of the organization’s yearly budget. “Obviously I’m biased, but it’s great stuff,” he said. “Over 25 years of paintings for which she doesn’t charge us a penny, and that money ends up paying for summer camps for the kids.”

This year, when the pandemic threatened those summer camps and other Project DEEP programming, the organization was forced to switch to remote tutoring and exam prep classes.

“It was a tricky situation where you want to be supporting the kids as much as possible, but at the same time you have to protect against the health issues that come with one-on-one tutoring, which is basically a non-starter,” he said. “So, we decided to do it remotely and have kids sign up and drop into [virtual] classes, and we had a great turnout.”

While enrollment dropped off slightly due to the Boston exam schools postponing their 2020 test, McDonough said the digital pivot made Project DEEP’s services even more accessible. “It created an opportunity for us to expand and reach out to different groups of kids who were unable to get to the Murphy School on a regular basis. Now one of our kids could be someone on the other side of Dorchester — the remote classes allow anyone to participate. I could see us in the future doing more of that to get to different neighborhoods.”

He is hoping for a vaccine and a return to normal in 2021. As it stands, it’s tough to predict much about next year, but one thing is for certain: Celia McDonough will make another Dorchester calendar, and it will be in demand. “I’ve been getting emails from different states,” said her son in noting the calendar’s widespread appeal. “Just the other day I got one from someone who lives in Montana, but who is originally from the neighborhood. I think it’s special to so many people because it makes them feel like they’re back in Dorchester.” 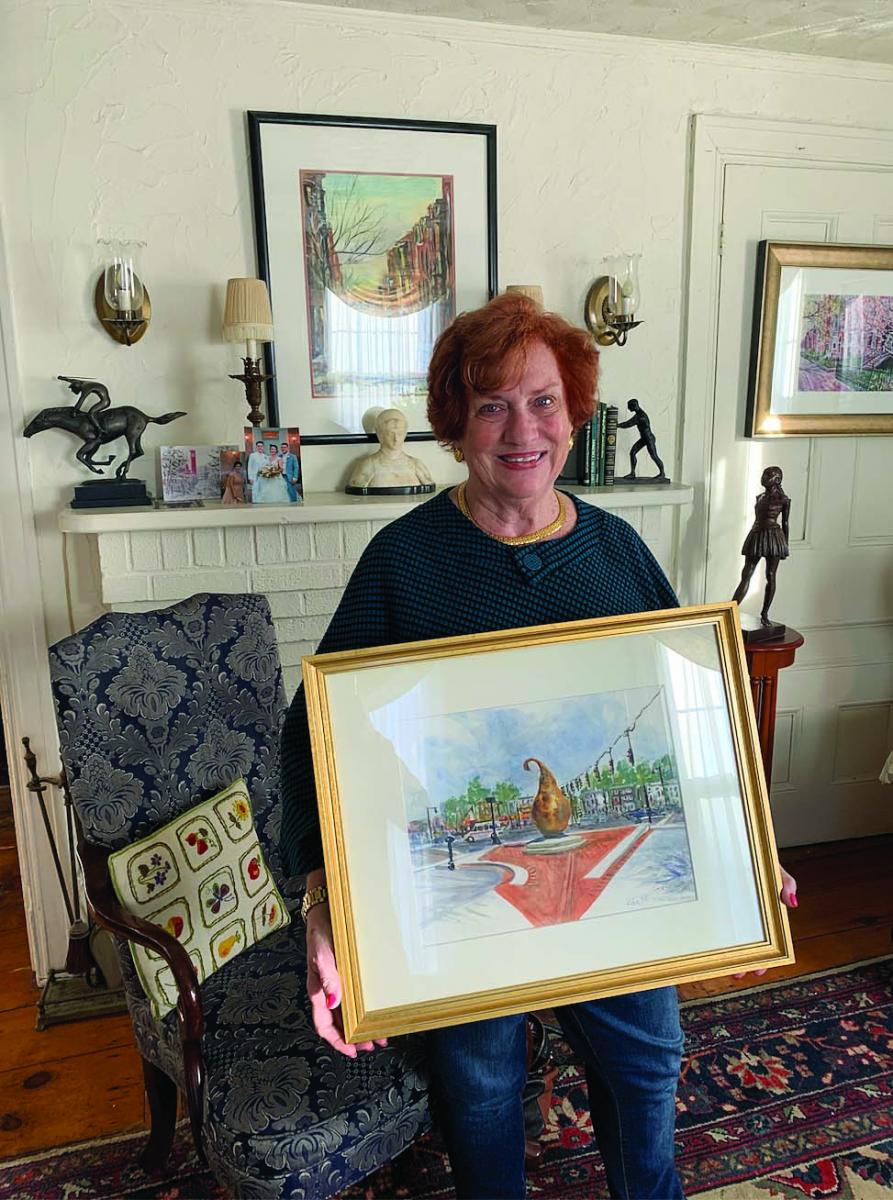 Celia chalks it up to a cultural phenomenon: The undying love that ‘OFDers’ hold in their hearts for the place where they grew up. “It’s all about nostalgia. Dorchester people are unique that way, they are loyal followers...I’ve lived in other parts and I’ve never seen anything quite like the devotion that Dorchester and formerly from Dorchester people have for their home.”