Growing up in New York City’s Chinatown, Ruby Chan experienced a childhood similar to that of many first-generation immigrants. Her parents, who had been engineers in China, struggled to find work without American degrees, so they opened up a Chinese restaurant.

As a kid, she would help out at the restaurant, sweeping floors and washing dishes. Often, customers would come in and ask if her father’s popular ginger scallion sauce was available for purchase. Sensing an opportunity, she urged her father to start building his own business around the product, an idea he dismissed without much thought.

“As an immigrant, he didn’t have that vision to be able to scale something to that size,” she explained in an interview with the Reporter. “All he knew was putting his head down and working hard and being able to pay the next day’s bills.”

Years later, after moving to the Boston area to pursue an MBA and settling down with her family, Chan found herself hearing the same suggestion from her daughter one night as she prepared dinner with her father’s recipe: “You should quit your job and sell this sauce!”

That was the inspiration for FreshZen, the healthy “Asian pesto” sauce brand that Chan started in 2016 and has developed over the past few years at Commonwealth Kitchen, the Grove Hall-based food business incubator.

Last month, Chan learned that thanks to a new partnership, her FreshZen sauces will be sold at 31 Whole Foods Market locations across the Greater Boston area.

“It’s my dream come true,” said Chan. “I’ve worked really hard to get to this point.”

Combined with that hard work, the guidance provided by Commonwealth Kitchen proved vital in all aspects of growing her business, she said.

“I had no idea how to start,” said Chan. “I had no idea how to scale a sauce, no idea what to do with hundreds of pounds of ginger and scallions, no idea you needed a ginormous 100-gallon kettle to make this stuff. They helped with everything from operation and production to taking it to the market to how to pitch it to big retail brands like Whole Foods.

She added: “A lot of people who have this vision of being able to build a brand and create a product and take it to market say the same thing: The task is extremely daunting. For someone to hold your hand through it and support you step by step, breaking down everything, that makes it reachable.” 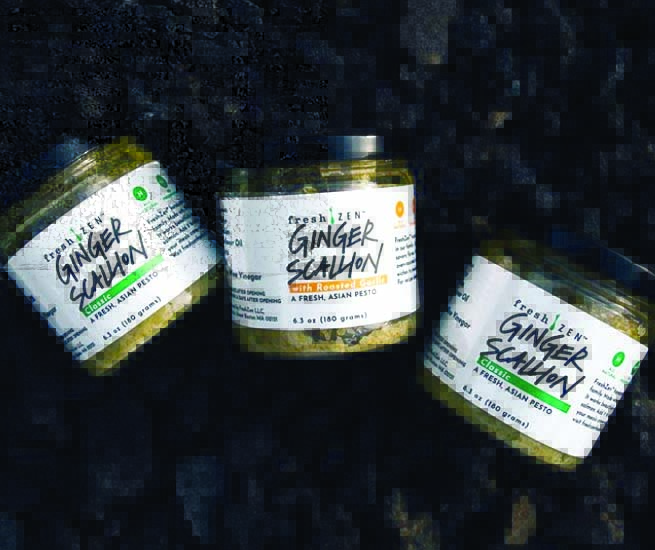 Chan's FreshZen sauces are based on her father's special recipe. ig: @freshzenfoods

FreshZen’s Classic Ginger Scallion sauce is based on Chan’s father’s family recipe and consists of five basic ingredients: ginger, scallion, sunflower oil, salt, and rice wine vinegar. Chan said part of the vision for the healthy, all-natural sauce came from her own experiences struggling to find time to put together balanced meals for her family.

“As a working mom of four kids, I’d be rushing home every day trying to put a healthy, clean dinner on the table. It was really hard.”

But Chan knew the value of the family dinnertime conversation and togetherness that accompany a home-cooked meal, and saw the need for a product that would make preparing that meal a little easier for busy mothers like herself.

“A lot of Asian sauces on the market had a ton of sodium and sugar,” she noted. “Our sauces have 75 percent less sodium than most other products, and no sugar...that’s where the name comes from— it gives families a sense of zen that their kids are eating fresh.”

As FreshZen continues to grow, Chan hopes she can tap into the dining services at places like Harvard, Boston College, and UMass to provide a touch of familiarity for students who might be homesick.

“My hope is it would give them a sense of being back at the family table with home cooking — even if it’s just five minutes — to get that sense of home.”

In the success of her burgeoning business, and in the faces at Commonwealth Kitchen, which prioritizes admitting women and immigrant entrepreneurs of color, Chan sees a reflection of her own immigrant roots.

“It’s really special being able to pay livable wages and being able to create jobs,” she said. “My dad could have been that person. The fact that I’ve helped to create jobs in the Dorchester community speaks volumes for me because that could have been my family sweeping the floors, chopping scallions...it’s an incredible opportunity for immigrants coming over here who don’t necessarily have the skill set to give them that chance. Even at my former job, working with a lot of Fortune 100 companies, they couldn’t move the needle like that.”

Now, as a model for her peers at Commonwealth Kitchen’s Quincy Street complex, Chan is helping them see a path forward and giving them hope for their own businesses.