After hours of public testimony from dozens of people, the Boston School Committee last night agreed to grant a 30-year lease of city-owned parcels along Mt. Vernon Street currently used as playing fields by the McCormack School to the Boys and Girls Club of Dorchester (BGCD) and the Martin Richard Foundation. The two organizations plan to build a $30 million indoor sports facility and community center —named the Martin Richard Dorchester Field House, which would be operated by the BGCD.

With the School Committee’s vote, BPS will now move forward with drafting the lease agreement. There is no further action needed by the Superintendent or School Committee at this point.

Under the current proposal, the building would house a turf field for soccer, lacrosse, rugby, football and other sports; an elevated, three-lane running and walking track; a fitness center with locker rooms, classrooms and a nutrition center, along with some open space outside. The building would be managed and programmed by the Boys and Girls Clubs of Dorchester, but would be fully accessible to the BPS students at the neighboring McCormack-Dever campus. The facility would also be open to the larger community, and to adult sports teams, for example, that could rent the space for games and practices when not in use.

The proposal— which has been met with fierce resistance from the McCormack School community and some abutters in Harbor Point— was the subject of intense criticism during the long, virtual hearing on Wednesday night. Still, the resolution to approve the lease arrangement was passed by a 3-2 margin, with two abstentions. The resolution passed with ‘yes’ votes from Chairperson Michael Locanto, vice-chair Alexandra Oliver-Davila and Michael O’Neill; ‘nays’ from members Dr. Lorna Rivera and Jeri Robinson; and abstentions from Dr. Hardin Coleman and Quoc Tran.

The committee’s vote approved the subdivision of 315-325 Mt. Vernon Street in Dorchester in a “request for proposals” selection of the Boys and Girls Club of Dorchester as the most advantageous proposal offering a 30-year lease of the subdivided parcel. An amendment tacked onto the resolution would require BPS to issue written notice to proceed and guarantee priority use of the field house to the students of the McCormack and Dever schools, other BPS students, and Harbor Point residents, respectively.

On Thursday afternoon, Mayor Martin Walsh told the Reporter in a phone call that he fully supports the BGCD-Richard Foundation plan.

“I’m very supportive of Martin Richard Foundation and Boys and Girls Club of Dorchester being able to build state-of-the-art facilities at the McCormack field,” he said. “It’s going to be a great use for the students as well as the community. The Boys and Girls Club of Dorchester is a place that a lot of kids have used as a safe haven over the years. You know who wins here? The kids in Dorchester. They deserve the best facilities available to them and that’s the plan here.”

He also noted that the city has dedicated funds to enhance green space outside of the McCormack.

“We’re going to be planning to enhance and beautify that area for the McCormack students and staff to create a better atmosphere.”

Some Harbor Point residents, as well as McCormack students and staff have argued that the project will strip them of green space on their campus and the Columbia Point peninsula. The outdoor playing fields, they say, which are essential to accommodate the school’s planned transformation into a 7-12 facility, a modification that came into play after BPS sought out development partners for the parcels in 2018. 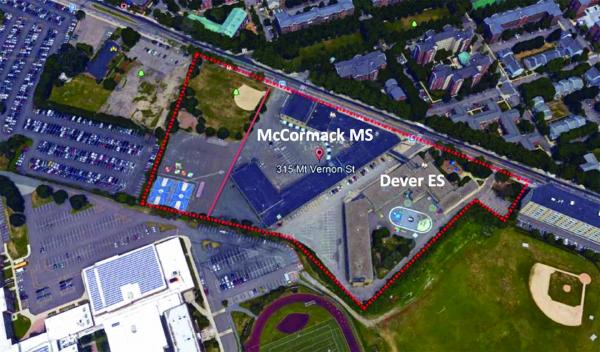 Many in support of the lease agreement, however, highlighted the opportunities the indoor facility could bring for students and the good standing of both the BGCD and the Martin Richard Foundation in the community.

City Councillor-at-Large Annissa Essaibi-George did not oppose the project, but questioned why the vote was scheduled during such a chaotic time.

“I am not opposed to this project, but question the timing of voting on the McCormack Field Plan,” she said. “There are so many questions about the process and many in the community have reached out in opposition to the field house at the McCormack School. We all need to be focused on rebuilding our school to allow students to have a great school year. Adding this to our plate seems to be too much.”

Councillor-at-Large Julia Mejia said she was inspired by the activism of students and community groups that opposed the project and urged the committee not to vote in its favor.

“I am not in favor right now about utilizing the field in other ways, more specifically, the proposal ignores that the McCormack students’ expressed a desire for green space above all else,” said Mejia. “A proposal that takes away green space from children during a pandemic when use of indoor facilities is virtually impossible does not benefit the students and does not account for the expansion of the McCormack into a 7-12 school."

At-large Councillor Michelle Wu also asked the committee to vote against the project.

“I’d like to stand with the McCormack community and Harbor Point residents in urging the committee to reject this proposal to develop the fields through a public-private partnership against the wishes of the school community and surrounding residents,” she said. “This goes against the immediate needs during this public health crisis when we need more open space and fresh air and it goes against that call to center racial equity in processes and decision making.”

Laura Carroll, an attorney who spoke on behalf of the Harbor Point Community Task Force, highlighted points made in an opposition letter from the group.

“We’ve heard testimony about how wonderful the club is. But that is not the issue and we have no doubt about that. The issue is where it is going to be put,” said Carroll, “The School Committee is being asked to strip away the land of the McCormack while at the same time asking it to open for 7-12 [grade] students.”

Kamilah Washington, athletics director at BGCD, said several opportunities would be afforded to BPS students and the community at-large.

“Although I know this is a rough time for everybody, I want to look at the positives of having this field house and the opportunities it will provide for all children and all children of color,” Washington said. “BGCD provides many opportunities for children from all backgrounds and races across Dorchester. The benefits I’ve seen while working there are health and nutrition, social justice, bowling, camping, going to sporting games, learning about music, and even having a teen center.”

Brenda Cassellius, superintendent of BPS, noted that a commitment from the city to enhance green space at the McCormack school would also be included in the process.

“When I met with the students and spoke with them, they did talk about their green space and really wanted to have that available for activities. I noticed a lot of concrete around both the Dever and McCormack,” she said. “The Mayor did give $200,000 to plan for the beautification of the green spaces and I know there is a process now for the property.”

After hours of public testimony, committee members debated the proposal before putting it up to a vote.

“We’ve gone forward with this theory of a high school, and we have not completed that planning process and it seems to me we’re making choices on things we don't know,” said Coleman.

“I’m feeling that a vote either way right now by me would feel uninformed of all the possibilities for that land in that area. Frankly, I agree with both sides and I don't’ have enough information to make a decision.”

School Committee member O’Neill supported the project, but said that an amendment should be included to allow priority access to the facilities to BPS students in the area and Harbor Point residents.

“I completely understand and hear the comments from McCormack students and Harbor Point residents about using that field, but I also think they can’t use it when it rains or snows. And we’re proposing to build a beautiful field house, being done by a non-profit that has an impeccable reputation in the city for its dedication to serving the most disadvantaged students.”

“To be consistent with the viewpoints expressed, I would want to ensure that in any vote we take, therefore in any lease that is agreed upon, it is very explicit that first priority is for the McCormack and Dever students, second is for other BPS students, and third priority is for the Harbor Point Family.”

Rob Consalvo, BPS senior advisor, said that including the caveat in the lease would be possible.

“We can tailor a lease to have any of the terms we want in it so it’s important for folks to realize that the land is not for sale. It’s still retained by BPS and we have the right to terminate a lease at any time if the applicant isn’t meeting the terms,” he said.

Questions arose over simultaneous planning in the area that would take place if the proposal passed, including BPDA oversight of the field house proposal through the Article 80 process, greater vision planning that the BPDA is going to take up for the entire peninsula, and the school district’s plan to transform the McCormack into a 7-12 school.

“I would argue it is the time to do them all simultaneously. I think it’s actually a thoughtful process that all of this planning is happening simultaneously,” said Consalvo.

“Hopefully this is a learning experience of how we can improve this process because obviously some of the community don’t feel like they were included. I support the Boys and Girls Club, so it feels very weird to be pitted in this situation,” said Oliver Davila, who voted in favor of the project.

“This will be a space people can go to year around with a guarantee that we’re going to prioritize McCormack-Dever, BPS students and Harbor Point residents and that it doesn't become a rental space.”

“I know this is a long and arduous process and I empathize with the position that we have much better things to be worrying about, but nevertheless this is a project that has been two years in the making and we need to keep the business of this committee moving. I want to thank everyone for a very tough and earnest conversation,” said Loconto.

“I think we’ve carried out the highest and best use out of this property for our BPS students and this conversation is not over, it will just be taken into the next step of this process, and there will likely be several more years to go before the approval and construction process begins.”

The project was conceived by Bill and Denise Richard, who created the Martin Richard Foundation— named for their 8 year-old son who was killed in a terrorist bombing at the Boston Marathon in 2013. They enlisted the Boys and Girls Clubs of Dorchester— led by Bob Scannell and his wife Mary Kinsella— to bring their vision of an indoor recreation facility for city kids in particular to fruition. Together, they have been seeking an appropriate site— ideally in Dorchester— for the past four years.