An architect's rendering of Indigo Block from East Cottage Street.

After several years of planning, construction is now in full swing at the site of Indigo Block, a mixed-use project in the Uphams Corner neighborhood that will transform what was once a vacant eyesore into homes and businesses.

Named for its proximity to the Uphams Corner station on the MBTA’s Fairmount Commuter Rail Line, which advocates and officials along the track often call the Indigo Line, the new complex is situated on a 2.75- acre lot at 65 East Cottage St.

“This project has been on the drawing board for six years, almost seven, and it has been a long-term dream of Dorchester Bay,” said Perry Newman, CEO of Dorchester Bay EDC, which owns the site and has overseen the development.  “As well as the housing and commercial aspect, it will also be a transit-oriented development,” he said.

The lot was formerly home to the Maxwell Box Co., but had been unoccupied since the city seized it for tax delinquency in 2011. The empty warehouse was later demolished and the site was put it out for bid in 2015. Dorchester Bay EDC was awarded the property in 2016.

The main residential building, which is now under construction, will be staggered in height at four and five stories and include 80 units of rental housing and a community room. A total of 9 condo units will be built in 4 smaller homes on the site. Overall, 26 units will be restricted to households making above 60 percent Area Median Income (AMI) and 44 will be designated affordable and funded with low income tax credits for households earning 60 percent of AMI or less.

Dorchester Bay EDC is working in partnership with Boston Capital, a large local firm, on the multi-family residential units, and with Escazu Development LLC, a small local company that is the sole developer of the condo units.

“Of course, there are tiers within that 60 percent band, and there are a number set aside for low-income and extremely low-income households, so we’re really hitting a deep level of affordability in our housing,” said Leah Whiteside, Dorchester Bay EDC’s associate director of real estate.

A two-story commercial-industrial building will front on East Cottage Street and offer a combination of mezzanine and light industrial sites – including loading bays – on the lower floor.

“It’s a very strategically placed and designed project,” said Newman. “It’s designed for maximum impact. It’s right on the MBTA Fairmount Line so access to downtown is easy and as the frequency of service improves the idea is that it will be much easier for people who live in the Indigo Block and also in surrounding areas to get to jobs downtown or in other parts of the community.”

Added Whiteside: “The first floor is an ideal spot for uses such as food production and light manufacturing. We’ve partnered with some contractors that might have interest in using it. The second floor will be set aside for tenants seeking office space.

“It seems a little more difficult to achieve now that we’re in a post-Covid world, but it’s still our goal,” she added. “The market was slow for a couple of months but things have started picking back up again. We’re hearing that there are still lots of tenants who are still very interested in locating in an urban area particularly in a post-Covid area so that they can be closer to their markets. We’re really optimistic that we’re going to be able to find a tenant in the timeframe that we need.” 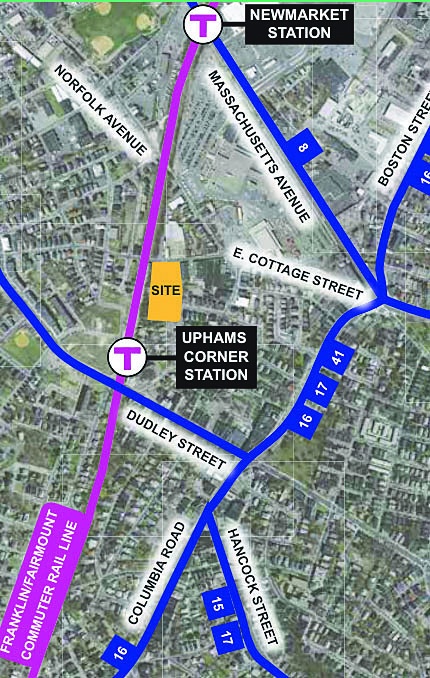 Graphic shows where Indigo block is going up.

DBEDC has partnered with Newmarket Community Partners and Boston Capital on the development, which is slated for completion by next May. The residential buildings are expected to be ready by next August.

“Due to Newmarket’s deep knowledge of the immediate geography, the need for light-industrial space in the area, and their long-term commitment to the neighborhood, it’s a really strong partnership to have on the commercial building,” said Beth O’Donnell, Dorchester Bay EDC’s director of real estate development.

Whiteside said that the “whole concept of our large-scale redevelopment plan was heavily based on community input.

"Through the community process, the neighborhood told us they didn’t just want housing, they wanted jobs,” she said. “We really took their feedback into account in each iteration of the design that we brought back to the community. The thing that we talked most about, and were most guided on by the community, was how we structured the condo units.” 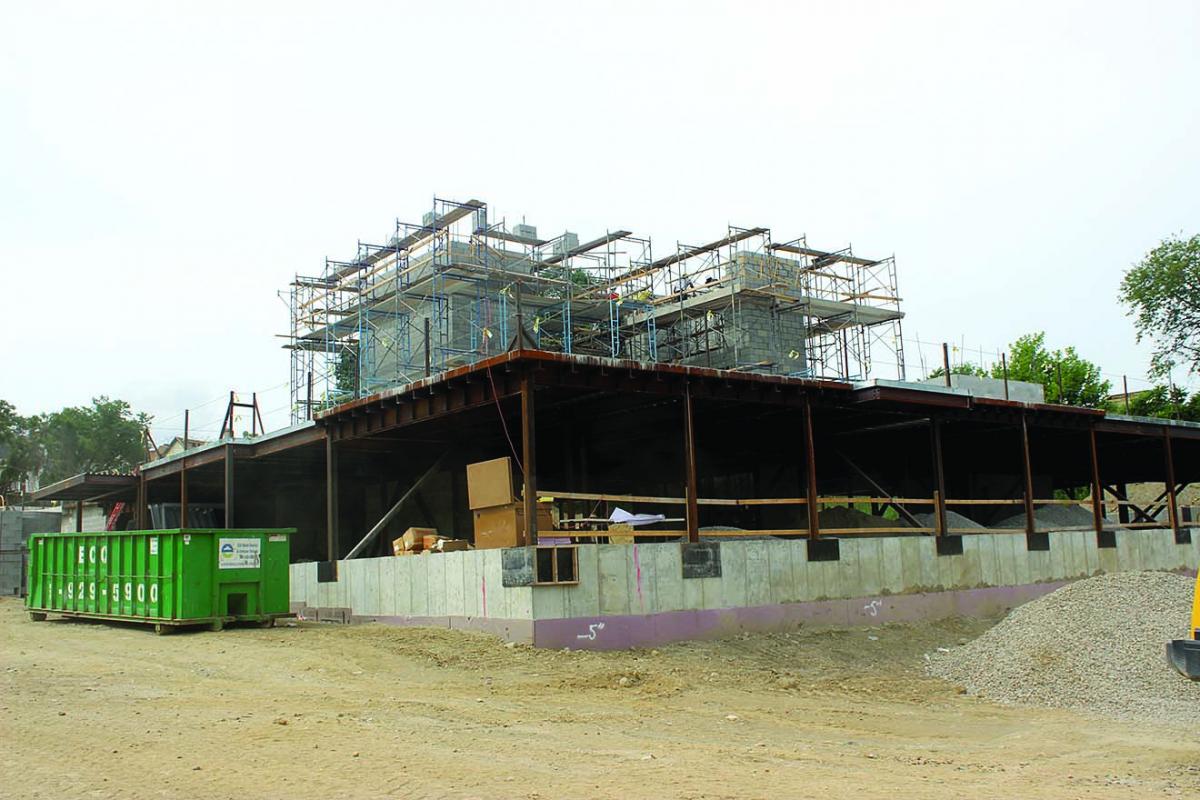 Construction and electrical work on the main residential building is underway.

A main concern raised by residents during input sessions outside of the city’s Article 80 process was “gentrification,” Whiteside said.

“We wanted to make sure the homeownership opportunities our project is providing are targeted to levels that people in the neighborhood could afford,” she said. “In the end, we had a really thoughtful discussion over the course of months, going with the neighborhood’s decision to have condo units,” she said.

“It really plays hand and glove with our overall effort to get people living in quality places, with access to quality jobs, and being able to move to places where they can access quality jobs,” said Newman. “I think we’ve taken the long view that transit will improve and, I hate to say it, but I think for many years there was nowhere to go but up for the Fairmount Line. But significant investment is being made now.”