Carolyn Nguyen, who grew up in Fields Corner, works as an engine assembly and intergration engineer for Blue Origin, an aerospace company founded by Jeff Bezos. Nguyen is shown next to the BE-7 engine mock-up that she helped to build. Photo courtesy Carolyn Nguyen/Blue Origin

As a first-generation American growing up in Fields Corner, Carolyn Nguyen had no idea that she would one day be building rocket launch systems for Blue Origin, Jeff Bezos’s space exploration company. However, she did enjoy dissembling the Barbies her mother bought her to figure out how the limbs were connected.

Nguyen, 26, followed that initial curiosity from the Holland and McCormack Schools to Boston Latin Academy (BLA) and then to Boston University. Today she lives in Seattle and works for Blue Origin— helping to build the next generation of rocket-engines to power people into space. She now hopes to inspire a new generation of Dorchester youth to pursue their dreams just as she did.

On March 19, Nguyen participated in the fourth episode of Autodesk’s “Make It Big with football star James Develin” YouTube series, produced in conjunction with the Wentworth Institute of Technology. Divided into seminar, tutorial, panel, and online contest components, the series is intended to expose youth to careers in design and engineering. During the 90-minute episode, Nguyen talked at length about her passion for education and youth empowerment.

“Even though my background is mechanical and hardware-focused, going forward I really want to invest in the younger generation, especially for underserved youth or anyone who lacks resources growing up,” Nguyen said. “I really admire the new generation, Gen Z—right after I was born, so I’m not cool like a Gen Z—because they’re just so entrepreneurial and resourceful [and] very empathetic people. I believe that if we can create education that is more creative and helps empower students to develop their skills and become bolder thinkers with growth mindsets, how many more problem-solvers can we have in our world?”

Nguyen — the oldest of five children born to immigrant parents from Vietnam— attributes much of her own success to the educational experiences she had growing up. After applying to Boston’s exam schools to escape bullying in sixth grade, Nguyen was accepted to all three. Rather than choosing the Boston Latin School, however, Nguyen felt drawn to the diverse community at Boston Latin Academy. By all accounts, she thrived there.

“I particularly remember Carolyn because her class was a very special class,” Mahoney said. “They were super smart and silly, and I really enjoyed them.”

Mahoney added that in Nguyen’s year, “We started to do a lot more collaboration among teachers to create interdisciplinary projects for students, really basing them around science, so to come full circle and realize that the way that she’s thinking, the way that she’s making connections around design, her immense empathy, [and] her interest in human-centered design—she’s not just designing lunar engines for outer space, but she’s also thinking about how to apply some those out-of-this-world concepts to earth—that was sort of the gist of the interdisciplinary work we did with students. [It is] super cool to feel like, years later, students are doing some of things we had hoped [for] as teacher team back in the early 2000s.”

For her part, Nguyen mentioned her high school chemistry teacher at BLA as a driving force in her professional trajectory.

“I didn’t know I wanted to be an engineer until I met my chemistry teacher in high school, and he said that he used to be an engineer in the army,” Nguyen said. “As a kid from a low-income background, school was really my only exposure to careers like that.” 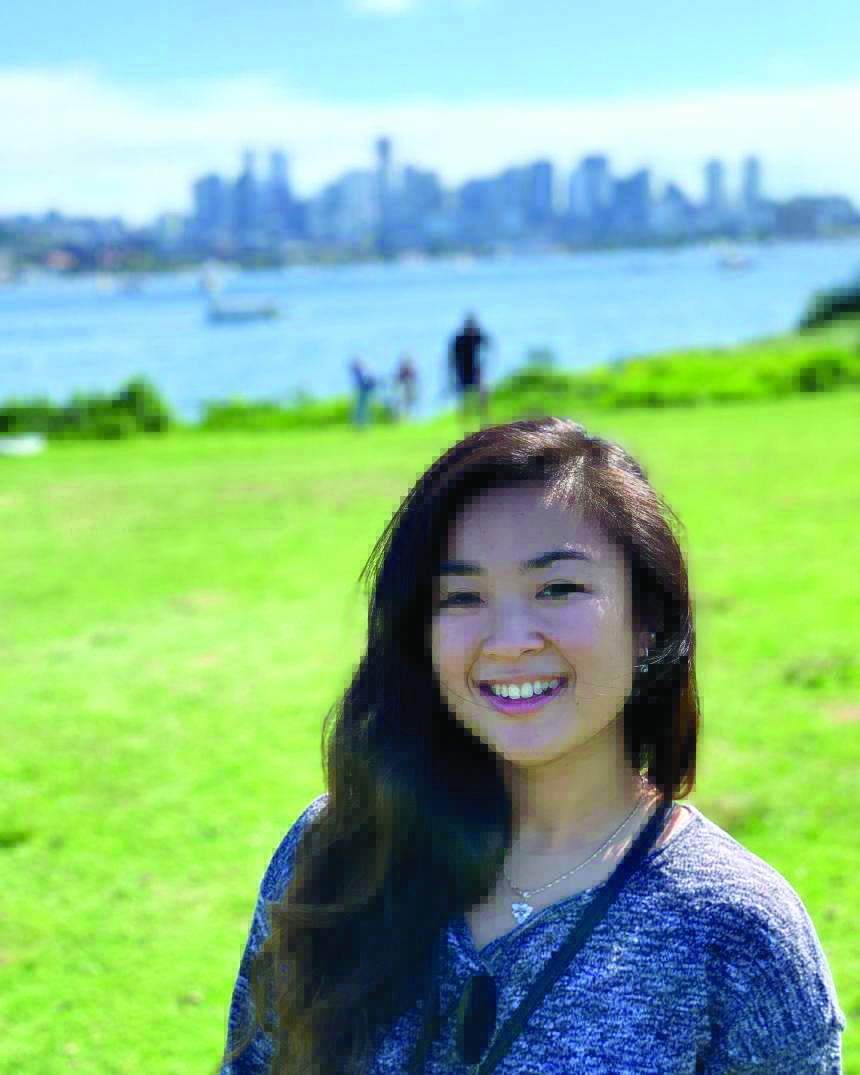 Carolyn Nguyen lives and works in Seattle, but began her journey as the oldest of five children to Vietnamese immigrant parents in Fields Corner.
Carolyn Nguyen photo

Nguyen started her career at Boston University as a neurobiology major. However, after realizing she did not want to pursue a medical degree, Nguyen soon changed her major to mechanical engineering.

“I liked solving problems at home,” Nguyen said. “I’d go to Home Depot, get some elbows and brackets, and start building on the walls. I found myself drawn to mechanical engineering because it’s very practical and you can see it in everyday life.”

Nguyen’s passion for mechanical engineering grew as she delved deeper into her major and career. However, she regrets not having used technology to her advantage in exploring her interests as a child.

“Growing up, I was really confused,” Nguyen said. She now advises kids to “find inspiration when you’re super young.”

“You can go on YouTube and look up some really great YouTube channels like VSauce [or] Smarter Every Day [or How It’s Made]. There’s Computer Clubhouse out there. There’s a lot of resources online nowadays. You can go to ADPlist.org to find mentors. Create a LinkedIn and don’t be afraid to reach out. Find your inspiration and then find the people who can make it happen.”

David Mareira, a Dorchester resident who is an Executive-in-Residence at Wentworth Institute of Technology, believes that the “Make it Big with football star James Develin” series and design challenge represents the chance for Dorchester youth to do just that.

“What’s fascinating about this program for Dorchester students and students across BPS is that they’re getting real design and engineering skills in partnership with AutoDesk and Wentworth, and I think it’s a real lesson to them that you can take something you love and then turn that passion into an occupation,” Mareira said. “I grew up in New Bedford, I’m the first person in my family to go to college, and if somebody had called me up and said, ‘Hey, do you want free classes to design and engineer, or be an architect—I didn’t know any of those were possibilities. I was brought up just trying to figure out how I was going to safely get out of the city.”

Mareira adds: “Sometimes it only takes that one opportunity to be the difference between ‘[It’s] crazy that I think I’m an astronaut’ and ‘Holy Cow, she did it, and she lives in Fields Corner!’”

Nguyen would encourage other Dorchester youth looking to make the leap from Fields Corner to cutting-edge design to research future opportunities now.

“If you’d like to study abroad in college, find colleges that provide you the opportunity to study abroad while learning what you want to learn,” she said. “What are their average SAT scores? What is the GPA requirement? Are you there yet? If not, what can you do today to get there?”

For Nguyen, the future quite likely means further studies in addition to her dream job. She has decided to return to graduate school later this year to study design. And, she plans to make return visits to Boston often to see her family.

In addition to planning ahead, Nguyen wants young Dorchester residents to remember that “people want to help you.”

“They are inspired by your goals and dreams as long as you are willing to be open-minded and try out new things,” she said. “You do not have to be ‘smart’ to enter the STEM field. You just need curiosity and the will to find out the answers. Whether you are talented or not, persistence will go a long way.”

Nguyen notes that she herself went through many interviews before landing her current position.

“It just kind of shows that you only need one yes. You never know.”

That persistence might just lead them all the way to outer space.