Little Leaguers from several Boston neighborhoods stepped up to the plate at Garvey Park in Neponset on June 6 for this year’s much-anticipated Opening Day for the Martin Richard Challenger baseball division, a star-studded tradition where no one strikes out.

The pre-game ceremony featured a rendition of the National Anthem from Todd Angilly of Boston Bruins fame and was bookended with a surprise visit from Red Sox mascot Wally the Green Monster. The scene galvanized doting parents and a party of volunteers in support of the league’s 47 special needs players, many of them running bases and fielding ground-balls for the very first time.

“Opening Day is always intense in a beautiful way,” said Brendan McDonough, the league’s founder. “When the kids make contact with the ball – for us, and their parents, but especially for them – that’s the greatest joy.”

The Challenger Division offers year-round, recreational programming through the Boys and Girls Clubs of Dorchester, holding soccer and basketball tournaments during the school year and swimming lessons in the summer months. But baseball, a sport naturally suited to masking and social distancing guidelines, is the group’s first love.

The season faced a month-long postponement to allow for greater vaccine coverage among parents and other game spectators, but “the challenges of the pandemic,” said McDonough, “only go to show that [the league was] built to withstand and built to last.”

“We were very fortunate that the nature of baseball gave us the option of heading outside with the kids, so we didn’t have to adjust too much to pandemic restrictions,” he said. “[Baseball] was the sport that started it all, and we felt compelled to have a season this year, even with postponements, because there’s always been a positive response to baseball from our kids.”

The Challenger Division comprises two leagues, a teen subdivision and a youth subdivision, and community service incentives from neighboring youth centers and schools, like Braintree’s Thayer Academy, continue to sustain the program’s steady flow of volunteers. This year’s youth subdivision is 35 players strong, a record for the league.

All the program’s participants took part in two weeks of training leading up to the season, including a slew of ‘buddies’ assigned to guide players’ swings at bat and jog beside them from plate to plate. Performance is the least of the league’s priorities – instead it focuses on collaboration, sportsmanship, and simply “showing up.”

Said McDonough: “When you see a coach pitching to a child with some degree of special needs, they might take eight, nine, ten swings before they make contact with the ball. But you look on the sidelines and there are parents, some of them with tears in their eyes, ready to take pictures of their kid because this wasn’t a moment they ever thought they would get to see.” 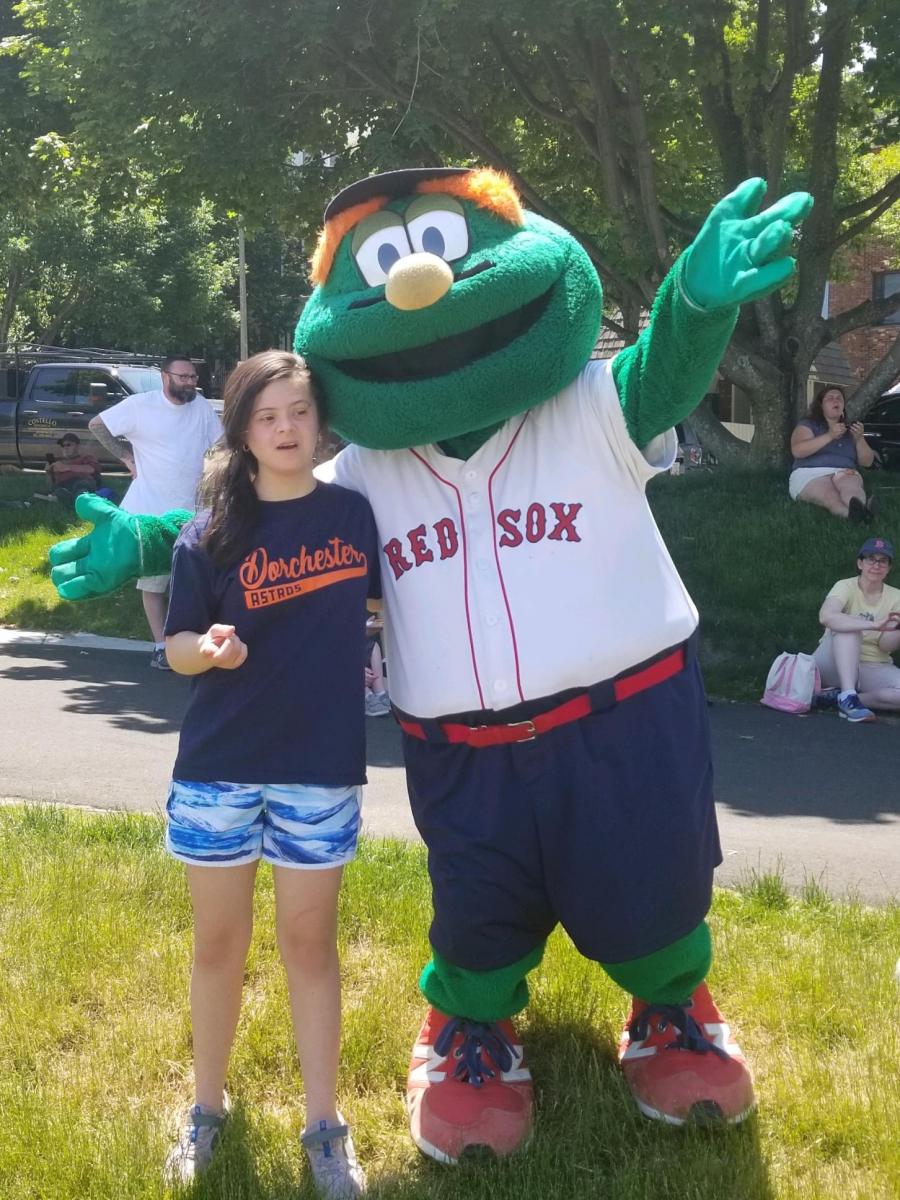 For McDonough, the league is a family affair – his daughter Sophia Rose (above with Wally) has a disability, and his three sons all lend a hand as catchers, coaches, and volunteer coordinators during games. What began as an attempt to manufacture athletic inclusion for children with disabilities has since become an exercise in community solidarity.

“It’s a tight-knit community, the special needs community, but I never expected to see buddies, kids with no clear, vested interest in our program, come to me and say ‘I’m coming back next week, this was awesome.’ The goal is to keep growing and to continue giving back – that’s what’s really special about the league, it’s a chance to give back,” McDonough said.