A view of the Rhyolite Quarry near Mattapan Square, which Boston’s chief archeologist says was used as a quarry by ancient people living in what is now Mattapan, perhaps as early as 7,500 years ago.
Image courtesy City of Boston

The quarry was the source of an ancient volcanic stone (shown below) prized for its banded maroon color and ideal qualities for making stone tools.

Boston and its neighborhoods are historic for certain, but rarely does the city have an opportunity to place landmark status on a site dating back before the Egyptian pyramids or England’s Stonehenge.

That is exactly what is being considered right now at the Boston Landmarks Commission for the Massachusett Tribe’s Mattapan Rhyolite Quarry – a curious site in a busy urban area behind St. Angela’s Church along Babson and Cookson Streets that dates back 7,500 years. The quarry is the source of an ancient volcanic stone prized for its banded maroon color and ideal qualities for making stone tools.

At the Nov. 9 Landmarks meeting, Commissioners voted unanimously to make the quarry a pending landmark in the city of Boston and designated it enthusiastically for further study.

City archeologist Joe Bagley appeared at the meeting as the designated spokesperson for the Massachusett Tribe in a joint petition for the tribe and the city to protect the unique and ancient cultural asset.

“What we have discovered is a vast majority of the quarry has survived intact for thousands of years and represents a remarkable asset of Massachusetts native landscape preserved in Mattapan,” Bagley told Landmarks. “The Mattapan Rhyolite Quarry has been a significant cultural asset for more than 7,500 years. Here and nowhere else can one quarry this beautiful material. The place has an above-local significance because it was a unique stone material source traded over thousands of years as far away as Rhode Island. The Massachusett Mattapan Quarry deserves a place on the list of Boston’s most significant cultural and historical places as a Boston Landmark.” 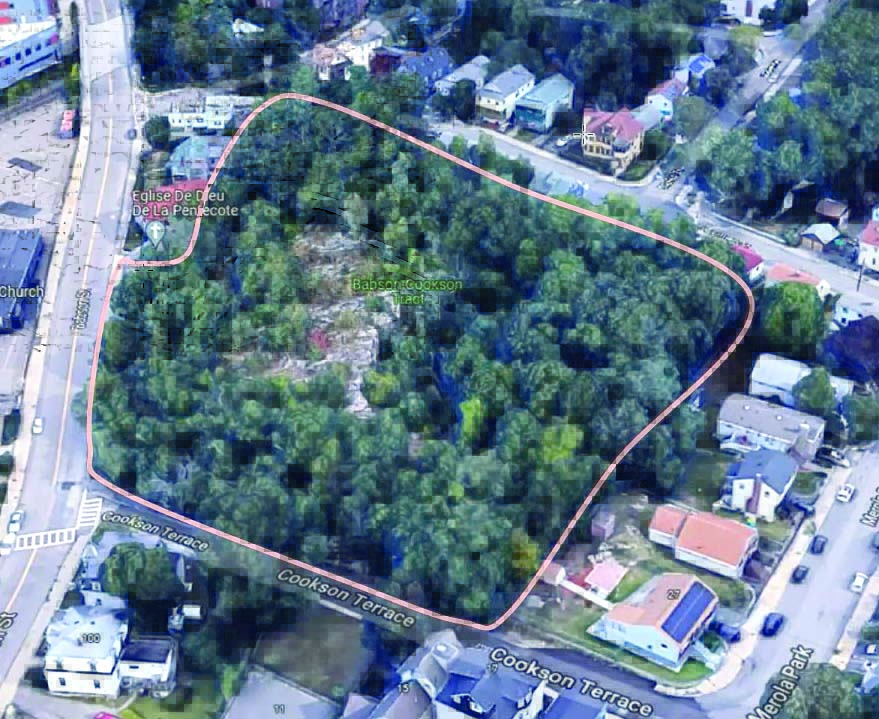 Above, an overhead view of the “Babson- Cookson” tract that includes the Rhyolite Quarry is shown in a slide from a presentation given to the city’s Landmarks Commission.

Bagley explained the material is one-of-a-kind stone formed more than 600 million years ago. He said Boston and Mattapan were once part of an ancient volcanic chain of islands known as Avalonia, forming below the equator. About 400 million years ago those islands collided with North America and formed eastern New England and Northern Europe. This once-active volcanic chain of islands is readily evident today, he said, in the Blue Hills, the Lynn Hills and the Mattapan Hills. The Rhyolite stone is a type of lava that cooled quickly on the surface during eruptions of these now-extinct volcanoes. Like similar black glass-like obsidian, Rhyolite is hard and became prized by Native Americans for toolmaking.

Mattapan Rhyolite was especially sought after as it was very distinctive, coming out of the quarry as a maroon color, but weathering as a banded maroon and cream-colored material perfect for making tools like spearpoints, arrowheads and knives.

Members of the Massachusett Tribe set up a village along Mattapan/Dorchester and Milton and called it Neponset – also the name of the neighboring river. In doing so, they purposefully sought out the Mattapan Rhyolite Quarry for toolmaking materials and there still remains great evidence of their ancient work on the site even today – as it unbelievably has remained relatively undisturbed since at least the 1930s, if not longer. Another quarry in Hyde Park called Crane’s Ledge shares a similar history for the tribe, Bagley said. The Mattapan area of Boston was carefully guarded by the tribe in ancient times, as it was one of the few places to find these kinds of quarries and was repeatedly defended from enemies that attacked in order to gain control of this asset, read a quote from the Massachusett Tribe website.

The descendants of the Sachem Chickataubut band of the Massachusett at Neponset have partnered with Bagley and the city’s Department of Neighborhood Development (DND), who wish to make the site an urban wild with landmarks protections. If approved as a landmark and designated as an urban wild, the city and the tribe will execute a memorandum of understanding whereby the tribe will help maintain the site and will seek to educate the public about it, and also hold private tribal activities there at times.

The quarry has received pending landmarks status and the landmarks study has been initiated.