Dorchester Tire owner Gary Saks and his father, Alan, bade farewell to the community in a Facebook post last week.

Dorchester Tire Service, an auto repair stalwart that has operated out of its Dot Ave. location in Savin Hill for nearly 60 years, closed its doors for good last Friday, owner Gary Saks confirmed to the Reporter this week.

Saks, whose father Alan bought the shop in 1982, has managed the company for the last 15 years. He pointed to a slew of industry shifts, along with blows dealt by the pandemic, as main contributors to the decision to shut down the business.

“Our model is both retail and trucking, but historically we’ve been built on the truck tire business, and with real estate in Boston going crazy, we’ve seen a lot of industrial companies leave the city and head out to the suburbs,” he said. “That has taken a big chunk out of our market, and the pandemic has taken a huge chunk out of the business on top of that.”

Saks explained that the Covid-related impact has been an industry-wide issue in recent months.

“Most of our customers are working from home now, and the behavior of our customers has changed so much...In general, people are driving a lot less, they’re not going away on weekends, they’re not driving to work… plus at this time a lot of people don’t have money to spend on their cars.”
Another disturbing trend— a shrinking auto industry workforce— also factored into Saks’s decision. “Even when business does turn around, there’s a dearth of quality help,” he explained. “That’s an industry issue; everyone I know in the tire and auto repair business is struggling to find good help right now. Those jobs may not be available next year, so I figured it made sense to strike while the iron’s hot, when I know there’s jobs for the guys.

“As far as I know,” he said, “we’ve been able to get multiple opportunities for everyone [at the shop].” 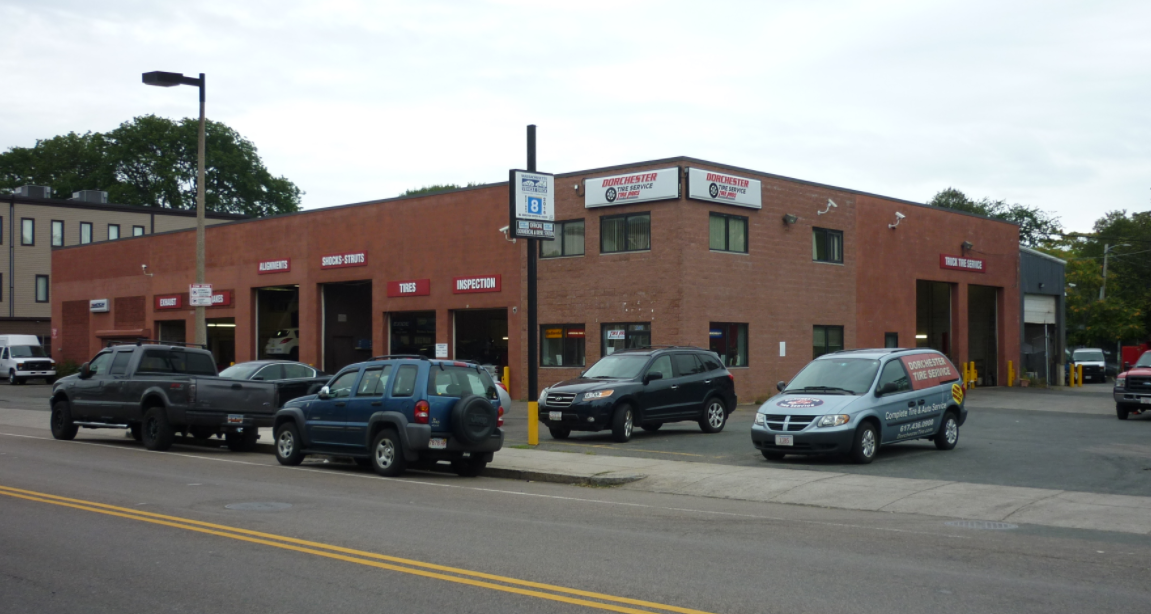 While Saks had been considering relocating to a building in the neighborhood with a smaller footprint, an eight-month-long search failed to turn up anything suitable. As it stands, he “has no plans to reopen, but never say never.”

In recent days, news of the closing has prompted an outpouring of love on social media from loyal Dorchester Tire customers. Over decades, the shop had woven itself into the fabric of the neighborhood with reliable service and quality customer care. Mayor Walsh was a regular customer, and in years past, Mayor Tom Menino dubbed Gary’s father “Alan the Tire Guy.”

Looking back, Saks recalled when the actor Brendan Fraser stopped by with a flat tire in 2016 and the buzz he generated drew international scrutiny.

“The news was very popular with the ladies of Facebook, and soon I had Brendan Fraser fans reaching out to me from all over the world asking about the encounter.”

But as far as Saks is concerned, he and his father earned the trust of their customers not with celebrity co-signs but with a straightforward philosophy. “We tried very hard to treat every customer like a guest.

“For us, being honest and developing that trust is far better in the long term than just trying to get everything you can out of them. We’ve benefited from a lot of loyalty and we’re appreciative of generations of customers who sent their kids and grandkids to us.”

Saks said that he and his father, who is ready to begin enjoying his retirement, have no plans for the future at the moment, but he took the occasion to again express their gratitude for the Dorchester community for years of support.

“Dad and I are going to spend some time cleaning out 60 years of memories from the building, and then I’m going to spend some time with my family this summer. After years of getting up at 5 every morning, it will be nice to be able to read the newspaper in the morning...I just want to thank the community at large for being so fabulous. Seeing all the comments on our Facebook post wishing us well, it just makes you feel good.”

It is not yet clear what will happen at the now-shuttered Dorchester Tire building. The property is valued at $1.2 million, according to the most recent assessment by the city of Boston. It was sold last year to Hasco Express Holdings, an LLC controlled by Gerald Chan, a billionaire investor who also controls other large parcels along the Dorchester Avenue corridor, including the massive DotBlock complex where construction is expected to begin soon.