Players and referees in the FLAG flag football league are shown in action at Walsh Park in Lower Mills last weekend. The Dorchester-based league has hundreds of players and is now in its 23rd year. Photo by Derick Lorrey-Parena

For 23 years, the FLAG (Friends, Lesbians, and Gays) Flag Football League has called Dorchester home. Founded in 1998, FLAG Flag Football lists its mission as “tackling stereotypes, building community, and transforming lives through sport for the LGBTQ and ally community.”

After starting with about 20 players its first year, FLAG Flag Football now boasts several hundred members, making it the region’s premier football league for the LGBTQ community, and the largest gay sports league in New England.

This spring, after missing two seasons to the pandemic, the games were back on the field every Saturday morning at Walsh Playground in Lower Mills.

“We’ve had a challenging year, as everyone has,” said Brian Teague, FLAG’s director of community outreach and external affairs. “Last year, we didn’t have a fall or spring season due to coronavirus.”

This year’s season, which ended last Saturday with the Rosie Bowl championship, was completed without any Covid-19 outbreaks.

On deck now for the league is a June 10 fundraiser at Dbar on Dot Ave. “We have our inaugural fundraiser specifically to support our scholarship foundation,” Teague said. “It’s the Marc E. Lewis Youth Scholarship [named in honor of a former board member]. The scholarship gives money to a graduating high school scholar-athlete who has made their school and/or community sports program safer and more inclusive for LGBTQIA community members, which is in line with the mission of our organization.”

He added: “It’s great to be able to see some of our veteran players go from not feeling comfortable in their high school locker rooms to now having 17- and 18-year-old players reach out to us—out players representing the LGBTQ community.” 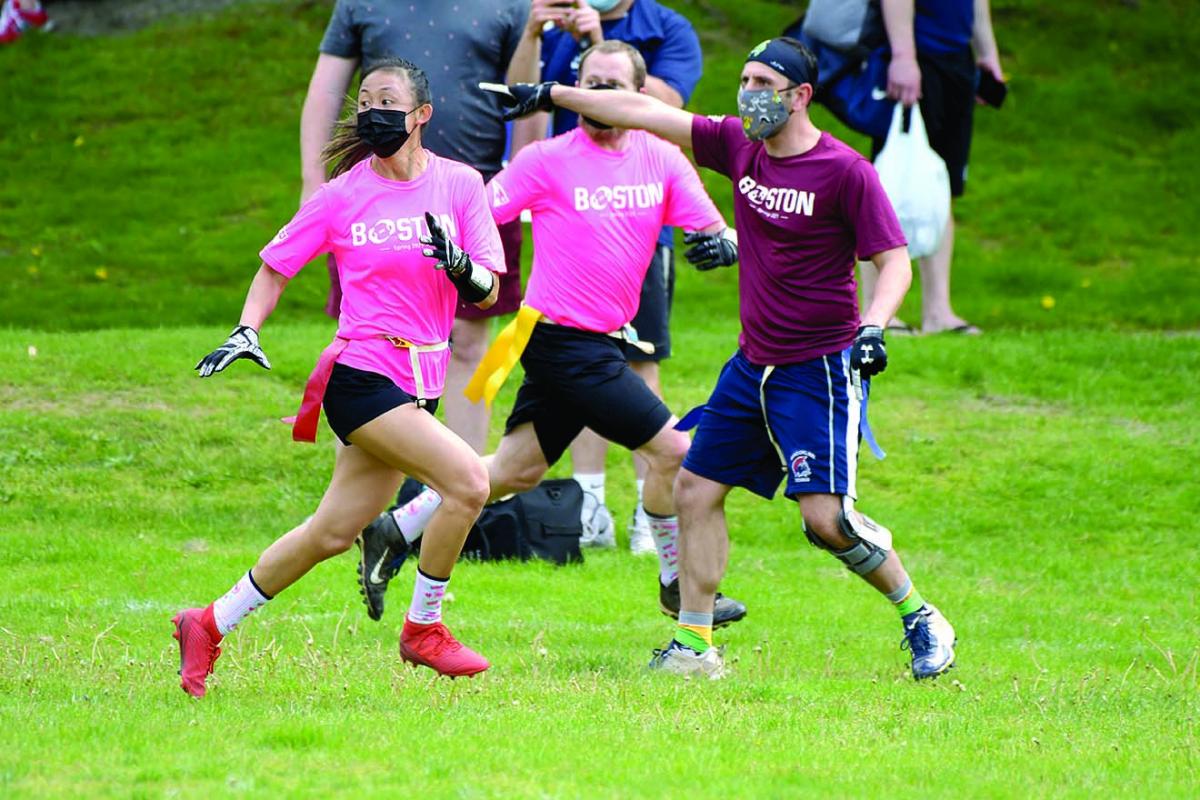 Players and referees in the FLAG flag football league are shown in action at Walsh Park in Lower Mills last weekend. The Dorchester-based league has hundreds of players and is now in its 23rd year. Photo by Derick Lorrey-Parena

The event is sponsored by Joe Castro Real Estate and Dbar, with support from many other local and regional organizations. Teague offered a special shout-out to the Blarney Stone, our “post-game bar for years. They’ve just really opened up their doors and accommodated us.”

He added: “We are lucky to have great sponsors, including the New England Patriots. To have that sort of support from a national football team is dynamic, and it really makes a difference for visibility. A few years ago, they offered to underwrite the Gay Bowl.”

“We’ve worked with Boston Parks & Rec to stay in Dorchester,” he said. “We love it here. Many of the players in our league live in and around Dorchester in the Savin Hill, Jones Hill, and Uphams areas. It’s nice to have that commitment to people who live and work and play in Dorchester.”

In addition to providing the annual Lewis Youth Scholarship, FLAG Flag Football members contribute thousands of service hours at local organizations each year. This year, many members concentrated their efforts on the Dorchester Community Fridge and the Great Boston Food Bank.

“Volunteering is a cornerstone of the FLAG Flag community,” Teague said. “It’s another way to build community and give back what we can.”
After nearly a quarter-century of sports and community engagement in Dorchester, FLAG Flag Football’s mission remains alive and well, according to Teague.

“I don’t think that we’re any different from the national trend toward a more inclusive America,” he said. “The shift from where we were 20 years ago on LGBTQ rights has certainly swung in the right direction.

“One of the things that’s interesting about our league is that many members didn’t have the chance to fully participate in sports in the past. It’s amazing to see how people are coming and saying, ‘I never wanted to play sports in high school or college. It didn’t seem like an inclusive place for me.’ And to see that shift when somebody becomes a standup athlete—it’s amazing to see people empowered to do something different.”