Next up for 'Waldo': University of Oregon

On a Friday evening in late May, Rivaldo Soares was at the CambridgeSide Cheesecake Factory surrounded by close friends and mentors for a send-off celebration dinner of sorts.

Weeks earlier, the 21-year-old Dorchester native had accepted a full basketball scholarship offer to play at the University of Oregon, a Division 1 program in a Power Five conference that has seen recent success under head coach Dana Altman.

Such an invitation would be a big opportunity for any prospect with dreams of making it to the NBA; for Soares, it’s the latest turn in a circuitous route that has seen him play ball on the local Expressions AAU team, for the John D. O’Bryant High School team, and, most recently, for South Plains, a junior college in west Texas.

But before all that, Soares — known by friends as “Waldo” — first picked up a basketball at the Dorchester House.

“He sucked,” recalled Nugget, a longtime Soares mentor and a community leader at the Dorchester Youth Collaborative who has been a fixture for years in the Dot House gym, a spot of refuge where local kids tend to congregate.

As the story goes, when Soares, then a fifth grader, walked into the gym to watch a friend play, Nugget tossed him a jersey and invited him onto the court.

“I was bad,” admitted Soares that evening at the Cheesecake Factory, nodding. “Now, I’ll give ’em like 35 plus change.”

The quip prompted guffaws and comebacks around the table, from a group mostly made up of kids who grew up alongside Soares in the same blocks around Dakota and Westville streets near Fields Corner.

Over the course of the dinner, they all offered words of encouragement and advice to “Waldo,” telling him they were proud of him, urging him to continue working hard and not look back.

For his part, Soares is looking forward to his first taste of D1 basketball.

“It’s part of the dream that I’ve been hoping for, you know? My whole high school career was waiting for this moment...I can’t wait to develop as a player.” 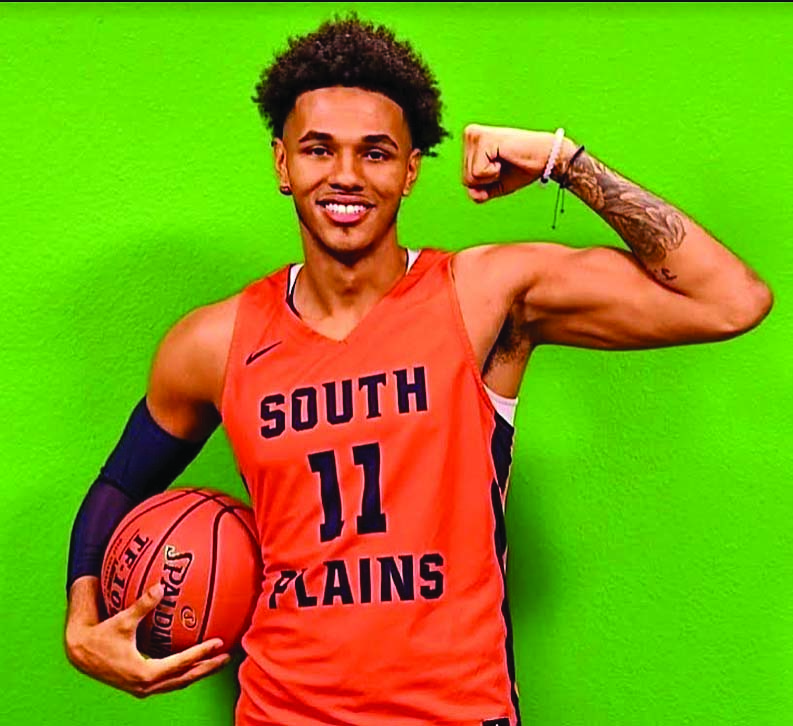 Rivaldo Soares’s fitness fit the bill at South Plains Junior College in West Texas this past season where he averaged 15.2 points and 6.8 rebounds a game, led the team in scoring, and earned NJCAA first-team All-America honors. Courtesy Rivaldo Soares Instagram

A dynamic 6-foot-6 guard, Soares accelerated his development in recent years, rising from the status an overlooked, off-the-radar prospect to a player with offers from six big programs. Last season at South Plains, he averaged 15.2 points and 6.8 rebounds per game, leading the team in scoring and earning NJCAA first-team All-America honors.

Soares considers himself an “all around type of player, very versatile. There’s nothing on the court I don’t think I can’t do. I try to do everything, be a two-way player, do it at both ends of the floor.”

He added he chose Oregon because “my play style fits in with what they do, and they know what they’re doing with [junior college] guys,” offering senior Ducks guard and Pac-10 player of the year Chris Duarte as an example of a player who has taken a similar path from junior college to a major D1 program and, once July rolls around, to the NBA draft.

Playing at a pro level is the goal for Soares, who named his father as his “driving force. I consider him to be my hero. Without him none of this is possible.”

Professional success and an NBA salary would allow Soares to pay back his father— Adriano Soares— for his years of support, he explained.

“I definitely want better for him. He’s gone through a lot, he’s been through a lot because of me. He’s sacrificed so much of his life so that I’m good. He’s the best father I could have had. A lot of other people would have quit, but he’s the most solid and strongest man I know. He’s endured a lot, and I can’t wait to relieve him of a lot of that stress.”

As someone who has seen dozens of kids with hoop dreams come out of Fields Corner and graduate through the D-House gym and the DYC program, Nugget knows just how much of an achievement Soares’s Oregon commitment is. As invested in him as he and the rest of the DYC crew are, this Dorchester kid’s victory is a victory for all of them.

“A lot of people wrote him off,” he said. “Where we’re from, we’re all designed to fail. It’s like we’re not supposed to make it out.”

The Soares family is Cape Verdean, the mention of which prompted Nugget to rack his brain for Cape Verdean NBA players. He turned up “very few” past and present. Many Cape Verdean kids from Boston don’t make it out of the streets, let alone to college programs, he noted.

“But we all helped Rivaldo, we’re all going to continue to help him. And I wouldn’t just do it for him, I’d do it for all the kids. He’s just the next one up.”

A young Soares in the Dorchester House gym.

Toward the end of the dinner, Emmett Folgert, founder of the now defunct DYC, offered a Waldo anecdote. On a hot day last summer at Town Field, where kids from the organization played ball, Soares had stepped in to break up a fight on the court and usher kids to safety. Minutes later, he taught the them Navy Seal box breathing, a de-escalation technique used at DYC to reduce stress.

“He’s an amazing kid,” said Folgert, reflecting on Soares and his peers. “I’ve seen these kinds of groups many times before. The outcomes — survival in the present, and mature adult success decades later — are stunning. I’m lucky and thankful to be part of this one.”

Soares himself knows how special it is to have such a tight-knit community at home, one that he will continue to rely on after making the trek out to Oregon.

“I’ll miss the people more than Boston itself,” he said. “Wherever I go, there’s always a solid group of people that always got my back.”

In a way, Soares is taking up the torch from the late Terrence Clarke, another young Boston phenom who ran in similar circles in the Expressions program and at the Dot House gym. Clarke died tragically in a car accident in April, just months before he was poised to be drafted into the NBA as a lottery pick. In a recent social media post, Soares dedicated his upcoming season to Clarke.

Just as he inspired a generation of kids who looked up to him, Soares is now giving other youth from Dorchester and Boston at-large a reason to dream.

“For me, it gives a lot of kids who are younger than him hope,” said Nugget. “It shows I’m not selling them a false dream.”

Many in the Boston area will likely be watching Ducks basketball for the next few years, checking in on the progress being made by their hometown star. All Nugget and the rest of the Dorchester House group can do now is continue to support Waldo, knowing how far he’s come, knowing his future is tied up in their collective futures.

“We can’t allow him to fail,” said Nugget, “because if he does, we all fail.”