Editor's note: Due to an error by Reporter editors, an incomplete version of this story ran in last week's print edition of the Reporter and was initially published online at DotNews. We have now published the full version of the story— which includes more in the way of information from BPS officials— here and will publish the full story in the Nov. 11 edition of the Reporter.- Bill Forry

On the first day of school in Boston three years ago, Jovani Fox had a strategy for her 6-year-old daughter Ava’s outfit. Knowing it would reach a high of 97 degrees by noon, they went with shorts and a T-shirt layered over an undershirt.

Fox still remembers receiving texts later that day from Ava’s teachers at Lee Academy Pilot School, explaining that, in an attempt to beat the heat, Ava had taken her socks and T-shirt off in the unairconditioned classroom.

“It was just that hot, even though we had prepared for a hot day,” Fox said.

The conditions that Ava experienced that day three years ago repeated themselves this past June, when temperatures climbed to 90 degrees in classrooms, prompting schools throughout Massachusetts to close or dismiss their students early. And Fox isn’t the only Boston public school parent who’s taken note of the extreme temperatures her child has endured while at school.

Mike Ritter, 41, began circulating a petition this past month calling on Boston schools officials to add heating, ventilation, and air conditioning systems (HVAC). Teachers and staff from BPS have spoken with administrators and even taken to social media to share their stories enduring extreme temperatures.

And after decades of advocacy from parents, teachers, and staff, BPS is finally starting to answer their calls for change.

Ritter started the petition on Sept. 21. But parents and teachers have called upon Boston Public Schools to make overhauls before the June heat wave, before the Covid-19 pandemic shed light on the lack of ventilation in classrooms, and before a 2017 report from BPS found that of the 125 Boston public school buildings, more than two-thirds of the school buildings were built before World War II and lacked HVAC systems. Currently, only 35 BPS buildings have HVAC systems, a spokesperson from BPS said.

“The pandemic threw the state of BPS buildings just into the spotlight,” Ritter said, “and they are so lacking. They're dangerous.”

Nearly 900 people have signed Ritter’s petition so far. Ritter said he’s hoping to collect at least 54,000 signatures—the number of students enrolled in BPS. In addition to the petition, Ritter, a freelance photographer, is also taking photos of BPS families in front of their children’s schools to promote his campaign.

Before Ritter drafted the petition, he also presented on the HVAC topic to the BPS Elementary and Secondary School Emergency Relief commission board in June.

In a statement provided to the Reporter, a spokesperson for the Boston Public Schools said: “Ensuring the health, safety and wellness of students and staff remains a top priority of the Boston Public Schools. BPS is dedicated to the continuous improvement of its facilities and consistently making investments in upgrades to ensure appropriate air circulation, quality and temperature in all of our school buildings.”

The district has been working with the Department of Elementary and Secondary Education (DESE), the City of Boston Public Facilities Department, and the Boston Public Health Commission (BPHC) to review federal, state, and regulatory requirements for airflow in Boston’s public schools, the statement added.

Ritter said he has hope that both Michelle Wu and Annissa Essaibi George will make progress on implementing HVAC in Boston’s public schools. Ritter believes BPS should cover the cost of implementing HVAC systems in Boston’s public schools with part of the $400 million in Elementary and Secondary School Emergency Relief (ESSER) funds the school district received from the federal government during the pandemic. “Why can't we make these big investments up front and then reap the benefits in student health, productivity, [and] environmental carbon cutting?” Ritter said.

Ventilation has only recently been addressed in Boston’s public schools, in response to the Covid-19 pandemic. To provide better air circulation in school buildings, school officials planned to repair or replace 12,000 windows this past year, and air purifiers were added in some classrooms.

But the ventilation changes haven’t turned down the heat in classrooms. This past September, Ritter noticed his two daughters, who are 4 and 7, would come home from Lee Academy with flush faces and low energy. “Adults can’t function well in that environment, kids can't function, there's no learning happening in that environment,” Ritter said. 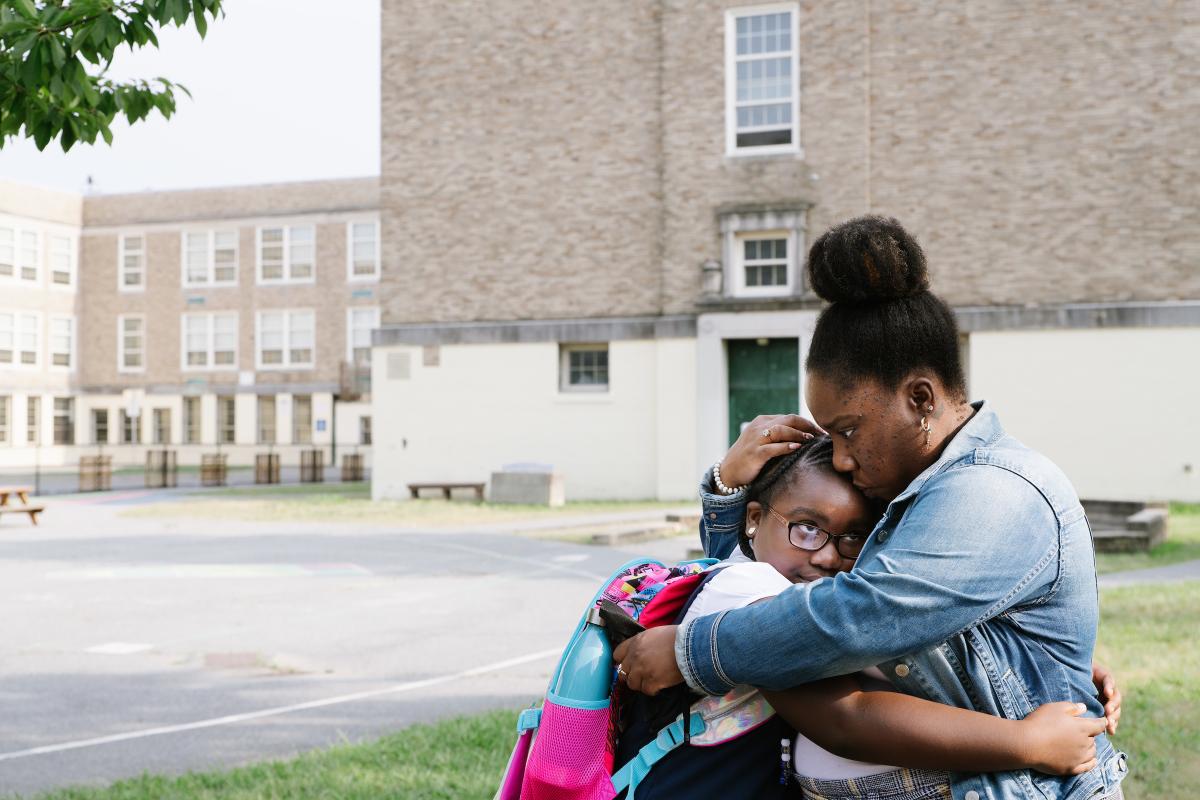 Pamela Rose, who has taught eighth grade at Boston Latin Academy for close to seven years, said the classrooms have reached temperatures of 86 degrees on multiple occasions. In her own classroom, Rose said her students can’t focus on the material she’s teaching. “Looking at my students, their heads are down, they're sweating, they're lethargic,” Rose said. “They're not in a place where learning is taking place.”

Rose, 38, said Boston Latin Academy teachers have been putting thermometers in their classrooms, and recording these temperatures at least since she started teaching there.

Before Boston Latin Academy, Rose taught at Snowden International School and Brighton High School. Conditions were the same there. “This is something that's been ongoing for years,” Rose said, “and now with climate change, we're gonna start to see more of these unpredictable temperatures.”

Tracking classroom temperatures has even trickled onto Twitter, the social networking site. Earlier this year, Excel High School teacher Molly Mus posted a picture that showed a temperature chart logging her classroom’s temperatures—the highest reaching 90 degrees during April. On March 3, Rebecca Mulligan, another Boston teacher, posted three photos, one of which showed that the temperature inside a classroom had dropped to 45 degrees.

Despite concerns from teachers, fans didn’t come to Boston Latin Academy classrooms until the pandemic, as school officials sought to get a handle on an airborne virus. Before that, according to Rose, she and other teachers had taken money out of their own pockets to pay for fans in their classrooms.

A spokesperson from BPS said that the school district monitors temperature in all classrooms three times a day and makes any adjustments as needed to ensure they are following protocols around expectations set by Occupational Safety and Health Administration for temperatures.

Additionally, BPS said they are working on distributing 6,400 air conditioners to all school buildings that lack HVAC systems. The systems will be installed starting late fall of 2021 through summer 2022.

This past summer, when summer sessions were held, 34 of the 64 buildings in use had air conditioning units. For the remaining building without air conditioning, 600 to 800 fans were distributed among classrooms, BPS said.

Now, as winter approaches and the temperature starts to drop, Rose is not only concerned about her students, but also her 4 and 5-year-old daughters, who are enrolled at the Sarah Greenwood School.

While her daughters attended school virtually in the winter last year, inside the classroom the windows were left open to provide ventilation. Rose saw from the Zoom screen that her daughter’s kindergarten teacher and the students were bundled up with jackets, gloves, and hats.

Rose said the school currently plans to keep the windows open again this winter. But Rose said she’s prepared to pull her daughters out of school if the temperatures get too cold this coming winter. Because her oldest daughter has asthma, Rose said she’s worried that the extreme weather inside the classrooms could lead to an asthma attack.

“The rhetoric we get from Boston Public Schools is that they're working on it, but they haven't been,” Rose said. “Then when you become a parent, it becomes even more pressing because now it’s your own child who's in that classroom.”

Erik Berg, vice president of the Boston Teachers Union, said members have pushed for decades for the installation of heating and cooling systems.

When the pandemic first started, Berg said the BTU fought even harder for air purifiers and operable windows in their classrooms. BPS made some changes last year. But even with these updates, Berg said the BTU wants new school buildings to be built as soon as possible, complete with HVAC systems.

“We need more new buildings faster,” Berg said. “Our students deserve it so other communities don’t need to send their kids to such antiquated buildings.”

While Ava was still at Lee Academy, Fox, along with other parents, raised the HVAC issue to the parent council and governing board. Although Fox said the teachers and staff at Lee were just as concerned about the heat, discussions never amounted to any action inside the school.

Three years later, BPS is now working to implement air conditioning units and monitoring temperatures inside all its classrooms. But while changes slowly trickle into Boston’s schools, many teachers, staff, and students are still stuck waiting for the rest of their calls for change—echoing back decades—to be answered.

“Our children now are having to bear the brunt of this lack of ventilation and heating and cooling,” Fox said.