Scott and Mike Collins in front of the scene where they saved a man’s life last Friday afternoon.
Seth Daniel photo

When it comes to saving lives, waiting around for someone else to take action isn’t in the playbook. It certainly wasn’t an option for Mohawk Insurance owners Scott and Mike Collins – and their customer, Eric Lawrence of Dorchester – last Friday afternoon as they watched a car begin to burn in a garage under the Peabody Englewood housing tower in Peabody Square.

With a handicapped man trapped in the burning car, and several onlookers unable to get inside, the three men took action – and rescued the unconscious man moments before the car erupted into flames.

At their insurance office across from the Englewood apartments on Monday, Scott and Mike, both still contemplating the idea of having saved a man’s life, said they were still in a bit of shock about what happened just before closing time on Friday

“You kind of wait for someone else to do something in those situations, to take charge or wait for the first responders,” said Scott. “The second time we looked out there, there was no one around and the car was on fire, and we knew it had to be us.”

The situation unfolded on an unseasonably warm fall afternoon at just about closing time for the Mohawk Insurance office at 1872 Dorchester Ave. Around 4:40 p.m., as they helped Lawrence solidify an insurance issue before the weekend, the three of them noticed a commotion across the street. A car in the garage under the tower seemed to have had an accident, and people were trying to get into the car – apparently to free the driver.

Scott, Mike, and Eric went outside and saw a man hitting the vehicle’s window with a 2 x 4 while another man, who uses canes to walk, was swinging away at the other window with the canes. Neither was having any success.

While another onlooker went to get help at the fire station across the street, the Collins brothers went looking for some better tools.

“I ran into the office to find something to hit the window and I couldn’t find anything,” said Scott. “I looked out the window again and no one was around the car anymore. I saw the whole engine block engulfed in flames. I ran across the street and Mike was right behind me. I told him to be careful because I thought the car might explode.”

The handicapped gentleman in the car had fortunately been able to push open the side door, but he had gotten no farther. Scott said he observed the now-unconscious man on the seat, and the fire spreading rapidly throughout the vehicle.

“When I got to the car, he was lying across the seat, but he was non-responsive,” said Scott. “I grabbed onto him, and at first I thought he was stuck on the seatbelt, but I gave him a good pull and he came out of the car.”

Added Mike, “I was with Scott and I grabbed the man’s other arm and we kind of dragged him across the parking lot away from the fire. Eric came over and helped us pick him up and we took him farther away from the car and laid him on the sidewalk.”

The rescuers did their job just in time, because less than a minute later, the car was fully engulfed in flames. Had they waited for the fire department or someone else to get to the scene, it’s very likely the man would have been fatally consumed by the flames.

“If we waited, it was going to be too late,” said Scott.

Once firefighters arrived and took charge of the situation, the man was treated and taken from the scene by Boston EMS. A report on his condition was not available from Boston EMS, but Scott told the Reporter that they had heard he was recovering. 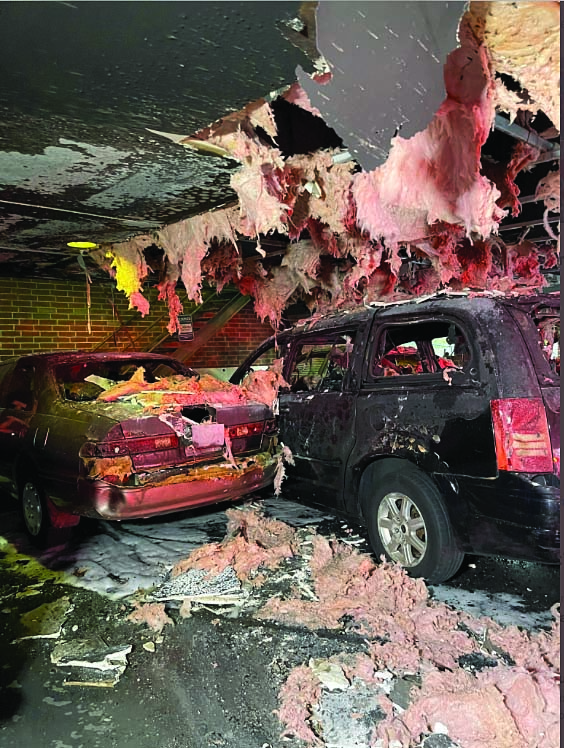 This Boston Fire Department photo shows the vehicle from which a handicapped man was pulled last Friday just before it burst into flames in a garage under the Englewood Elderly Housing complex on Dorchester Avenue.

Boston Fire Department responders reported that when they arrived on the scene, they found that the fire was spreading from the car to the underside of a community storage area in the building above. Fire Department command quickly struck a second alarm for the situation, bringing companies from all over the neighborhood over a concern that the flames would spread upward. However, firefighters made quick work of the blaze, and put it out before it could spread any farther. Residents were allowed to return to their homes later in the evening.

After things had died down, Scott and Mike and Eric walked back across the avenue to the insurance office, where Eric wrapped up his paperwork and Scott and Mike closed up for the weekend.

“It was amazing,” said Scott. “You come to work every day and do insurance and you don’t expect anything like that…I just think about what a gruesome death that would have been – for him to burn alive right there. I texted Mike afterward about it and just told him I felt good about us getting the guy out. It’s a good feeling.”

No details have been released to dates from an investigation into what happened to cause the car to catch on fire, but it appeared to be the result of a single-vehicle collision in the garage.