One view of what a new building at 24 Ericsson St. site may look like as shown during a BPDA-sponsored public meeting held online last week. Image courtesy RODE Architects

Nearly four years after a development team first submitted a letter of intent to construct a complex of buildings on the Port Norfolk waterfront, they may finally be moving ahead with community approval.

On March 30, the BPDA hosted a public meeting on a new and updated proposal for the 24 Ericsson Street site. Over an hour-long presentation, the development team, including Jeremy Henry of RISE Together, Kevin Deabler of RODE Architects, and David Black and Stephanie Kruel of VHB Inc., laid forth a revised proposal for the site that emphasized public access to the Port Norfolk waterfront, neighborhood cohesion, and climate resilience. After the presentation, BPDA representative Raul Duverge took public comments on the updated proposal.

For the most part, the feedback was favorable.

During the meeting, the development team emphasized the many changes to their original proposal.

Whereas the 2018 model called for a total of 185,150 square feet of construction spread across four buildings, excluding parking, they have now reduced that total to 168,000 square feet. In addition, they revised their original design to include roof shapes and building materials that better reflect the surrounding architecture and industrial history of Port Norfolk, citing structures like the Boston Harbor Distillery as inspiration. Finally, the team detailed how their development would enable public access to the waterfront while improving flood resiliency in the Port Norfolk neighborhood. 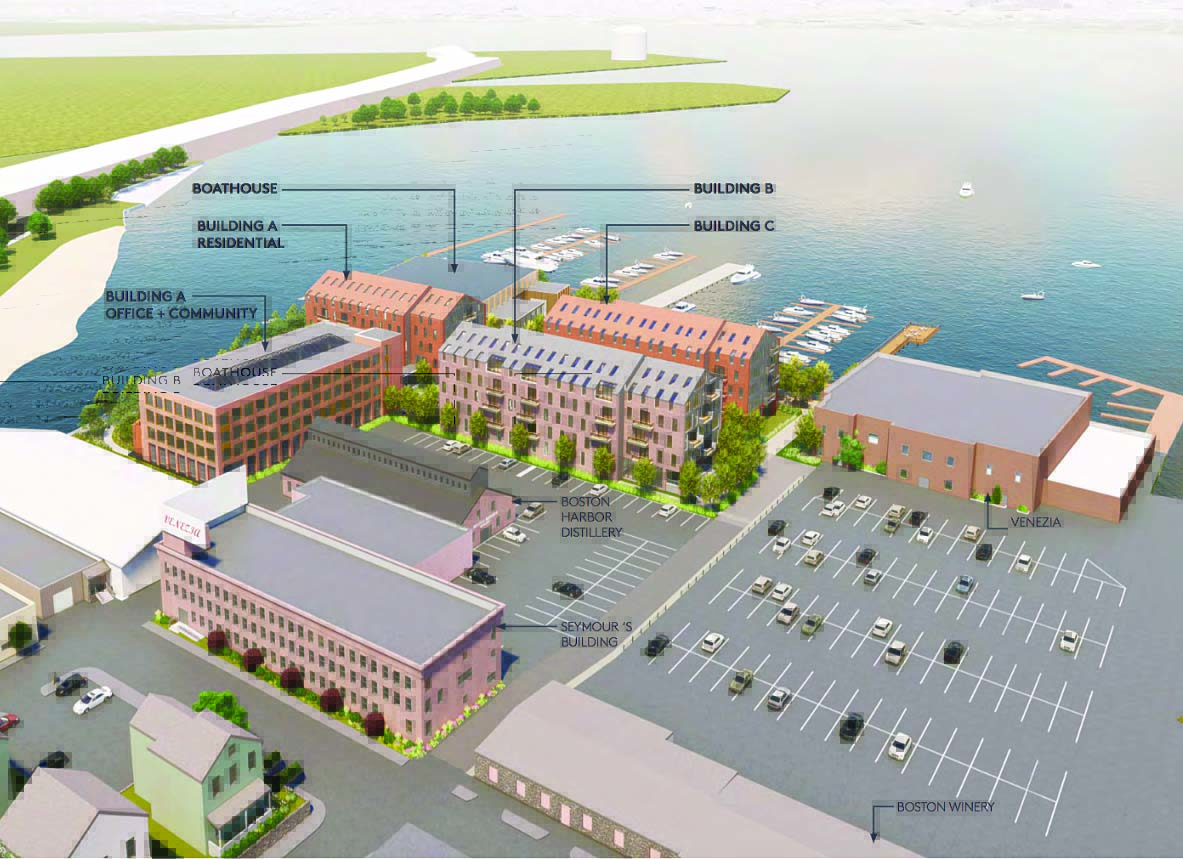 A rendering from architect firm RODE shows the layout of buildings proposed along the waterfront in Dorchester’s Port Norfolk section.

According to Kevin Deabler of RODE Architects, “Through our time together, we learned a little bit about how special Port Norfolk is to its residents, especially its history as an industrial waterfront location. Our goal came through this process, after learning a little bit about its history, to restore a sense of place. To bring Port Norfolk back to something that was part of its exciting past in Dorchester.”

He added, “As a Dorchester resident, I’m proud to be part of the process of reclaiming Dorchester’s waterfront for public use. Project by project, Dorchester’s shoreline is starting to open up and become better, and we certainly see this site as an opportunity [to do that].” The new proposal includes a “community wharf,” public walking path, and a “resilient landscape” open to the public.

Noting that the property is bordered by Tenean Beach and other outdoor amenities, Deabler stated, “We want to respect these spaces and see them as the continuation of a pathway around the port.”

Several members of the development team also spoke about the climate resiliency measures they have adopted in compliance with the Massachusetts Public Waterfront Act and Coastal Resilience Solutions for Dorchester Plan, including ground-level parking, the reduction of paved surfaces, and wetland restoration.

Finally, David Black of VHB spoke about potential transportation mitigation and improvements in the Port Norfolk neighborhood. According to Black, the developers would adhere to a Boston Transportation Access Plan Agreement (TAPA). As a result, they would be required to conduct a study on the possible impacts of their project on local transportation. From there, they would examine and implement potential solutions.

After the presentation, many members of the public reacted positively to the updated proposal. Edward Roche, a Port Norfolk resident, said: “I appreciate the improvements you made from the design. I’m beginning to see something here I can relate to my home. I didn’t know what to expect, but I feel really happy about what I see.”

Vincent Coyle of the Local 7 Ironworkers echoed Roche’s sentiments, saying, “I’ve been going to these public meetings since the beginning. There was a lot of pushback since 2017. Here we are, moving forward, in 2021. I just want to give a shoutout to everybody, the architect team, the developers, just for listening to the community.”

Several other union leaders echoed the sentiments, calling the development good for “quality jobs” in the neighborhood.

Not every community member at the meeting was without reservation. Maria Lyons, a resident and member of the Neponset River Greenway Council, remained concerned about climate resiliency and the potential for flooding.

“You look at the size of this project, and it’s still too big,” she said. “In a unique neighborhood on a peninsula that’s going to be extremely susceptible to flooding, you have to ask yourself, ‘should something like this be being built here?’”

However, for the most part, comments were weighted in favor of the development.

In the words of local resident Barry Keady, “People aren’t always going to like something like this being built in their neighborhood, but at the end of the day, we think this is a great project with a great development team.”