A current photo of 10 Melville Ave., which is now being sold by the Salvation Army after being under its stewardship since 1996. Seth Daniel photo

A group of Dorchester neighbors have filed a petition with the Boston Landmarks Commission (BLC) to make the former Melville Avenue home of New Kids on the Block phenoms Jonathan and Jordan Knight a city landmark site and the enthusiastic group believes they have the right stuff to make it happen.

The group filed the petition on Oct. 7 with the BLC and the first hearing on the matter was scheduled for Tuesday of this week. The neighbors are taking the process step-by-step in order to preserve a home that has recently gone up for sale, a property that had as much significance in the past as in recent history when it was a top gathering point for so-called “Block-head” fans.

Dorchester resident and BLC Commissioner John Amodeo filed the petition, but he was not able to comment on the matter.

Earl Taylor, who is one of several people advancing the idea, said the home has significance through time, up to its 1990s heyday when so many teens and pre-teens would stand in front of 10 Melville Ave. just to get a glimpse of the Knights or any other members of the famed boy band. 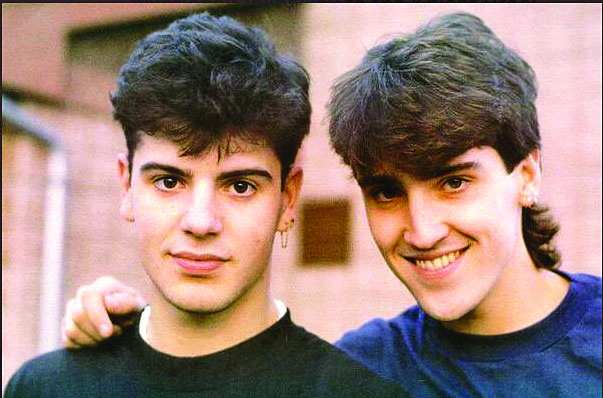 New Kids, Back in the Day— Brothers Jordan, left, and Jonathan Knight circa 1990. Photo courtesy NKOTB/Twitter

“I think it’s a significant house with its unique design and its architecture and its association with various people, starting with John W. Fields and going up to two New Kids on the Block members, the Knight brothers,” said Taylor, who is also president of the Dorchester Historical Society.
“It’s an interesting building that should be designated,” he added. “In the recent past, the boy band connection is definitely an association worth celebrating.”

The home has some significant ownership and architectural history going back to 1880, when it was built by John W. Fields, of the Fields Corner family, who was a successful leather merchant. It was designed by the architect George Meacham, who also designed the Boston Public Garden, and the twin to 10 Melville Ave., the celebrated and preserved Haskell House in Newton.

All of those elements add up to a clear foundation for preservation, and potential landmark status, but clearly, the added wrinkle of having a prominent association with the New Kids on the Block – a band that is touring together again and reviving their 1980s and 1990s popularity – gives it added swagger.

The home was sold to the Knight family in 1972, according to the Landmarks application.

“W. Allen Knight was a carpenter who later became a minister,” reads the Landmarks application. “Marlene became a social worker and later managed the New Kids on the Block fan club. Their sons, Jonathan and Jordan, rose to international fame as members of the boy band New Kids on the Block. Their first album, New Kids on the Block, was released in the spring of 1986. It eventually was certified as three-times platinum.”

In 1996, the Knight family sold the home to the Salvation Army, which created the Jubilee House there that was famous for giving out hot cocoa on Halloween. The house has been put up for sale by the Salvation Army, causing many to believe it could be in danger of the wrecking ball and a large development of some kind.

For original New Kids fans like Kim O’Leary, that doesn’t seem right. Now an adult, but still a die-hard, O’Leary said that when she was between 12 and 15, she and scores of her friends – and probably hundreds of girls throughout Dorchester – would converge in large numbers on any of the regular spots where the band might be “spotted.”

Those places included Hi-Fi Pizza, the Daniel Marr Boys and Girls Club, the Wahlberg home on Mercier Street or Jones Hill, Danny Woods’s home near Wainwright Park, and of course, the Knight home at 10 Melville Ave.

The fact that it was such a treasured memory from O’Leary’s childhood, and for thousands of other girls in Dorchester, Greater Boston, and far beyond, would seem to make the property a piece of history worth Landmark status.

“My friends and I would sneak over there,” she said. “We would walk there after school and stand outside and hope for a glimpse. We never did get one…Most of the time my mom would drive us there and let us get out and stand there.

“I think it’s definitely neighborhood history and Boston history,” O’Leary continued. “I think it was historic or part of the culture for hundreds or thousands of girls who would do the same thing we did. To put Dorchester on the map for something like that could be amazing and fun to see. I might be a little biased, though, because Jordan was my favorite.”

While Maureen Forry-Sorrell, who recalled sneaking over to the house as a pre-teen, thinks making the house a landmark is kind of “ridiculous,” she has her own stories of “Block-head” activities.

She recalled that while others stood in front of the home, she and her friends outsmarted everyone and went to the back to wait for any of the boys to get within eyeshot.

“The biggest memory I have is when my mom flipped her lid when I was hanging out in Codman Square at the age of 12,” she said. “That was a grounding situation.”

She added, with hesitancy, “I guess if being the Knight house gets the designation and preserves the place, then I think it’s a good thing.”

O’Leary said that having more modern history alongside the neighborhood’s traditional historic properties could bring more of an excitement about preservation to a new generation.

“Dorchester is historic in and of itself,” she said. “For something like this that’s more recent and popular, I think it would be great to recognize that. I think it deserves it, too. It is a big part of history and especially because they are still going. They have a show coming and they’re still relevant.”

Andrew Saxe, who is also part of the group petitioning the BLC, said he knew nothing about the connection to New Kids on the Block. However, he said, after moving many years ago to nearby Allston Street, he felt like the house looked a lot like his uncle’s former home in Newton, which turns out to be the Haskell House, the match to 10 Melville. He said he is all for preserving the home both for its distant past, and its more recent New Kids history.

Saxe said that many in the neighborhood fear that the home will be torn down by any new owner, and what will be put up is another “Marty Box,” a term he said he coined in honor of the many apartment buildings that were built under former Mayor Martin Walsh’s administration.

“The developers want the lots on these old properties and not the history,” he said. “We’ll again lose the history and the green space. There’s a lot of stress along Melville Park right now. Many feel it’s open season on our neighborhood…If Boston cannot preserve 10 Melville, then just throw in the towel. Does it have an important architect? It was done by the same architect as the Public Garden. Is it architecturally important? It’s twin house in Newton is an iconic house that is protected. Is it associated with someone famous? Well, Mr. Fields was a prosperous merchant.
However, a century later these kids came out of there who were a national phenomenon. It checks every box, for goodness sakes.”

Earl Taylor said he believes that the BLC will likely designate the property for a study. That is the beginning of the process to designate a property a Landmark, or not. If the petition were to clear the BLC after a process, it would also need approval of the City Council and the mayor.

Those submitting the petition aren’t going so far as to say they’re hangin’ tough, but they certainly are keepin’ their fingers crossed.

Meanwhile, for superfans like O’Leary, if ever the home were designated a Landmark, and there was a New Kids museum there in need of artifacts, she’s got just the thing.

“I may never have gotten a glimpse of the Knights, but I did once get the nozzle from the family’s garden hose,” she said with a laugh. “I still have it in a Ziploc bag.”