On Tuesday morning, local and state officials and healthcare leaders marked the opening of two Covid-19 vaccination centers in Mattapan and Dorchester, at Morning Star Baptist Church and Russell Auditorium respectively, as the Commonwealth’s vaccine rollout begins to pick up steam in Boston’s neighborhoods.

Attorney General Maura Healey was on hand at both events to highlight the expansion, stopping first at Morning Star where she was joined by Bishop John Borders and Guale Valdez, CEO of Mattapan Community Health Center.

Since last Thursday, the Blue Hill Avenue church has been a “statewide access” site administering vaccines to eligible residents through a partnership with Mattapan Community Health Center and Boston Medical Center.

“It’s amazing that this church in a span of ten days has been turned into a vaccination site,” said Healey, noting the “perfect synergy” between the clergy and physicians that resulted in the site popping up in Mattapan, a majority Black and brown neighborhood that is among those in Boston to be hit hardest by the coronavirus.

Bishop Borders, senior pastor at Morning Star, cited how the church, which is situated on a major throughway and bus line, serves as a natural and familiar gathering spot for parishioners and the community at large.

“I saw on the news this morning a pastor in Baltimore beseeching the state to make his church a vaccination site,” Borders said. “Here in Mattapan where there are higher rates of pre-existing conditions, imagine what it means to me to have the attorney general come to my church and see the lifesaving work being done here.”

Turahn Dorsey, a Dorchester resident who received his first shot Tuesday morning, lauded the accessibility of the vaccine close to home.
“I think the state is increasingly catching up to figuring out how it best deploys vaccination sites,” he said. “I certainly understand the mass vaccination sites, but if we want to get to vulnerable populations and folks who might not easily be able to access those sites, you’ve got to do some neighborhood-based vaccination like this.”

Later that morning, a short drive away, Healey joined Sandra Cotterell, CEO of Codman Square Health Center, Dr. Thea James of BMC, and state Rep. Russell Holmes at the Russell Auditorium on Talbot Avenue near Franklin Field. The function hall has been used by the health center to test patients for Covid-19 and will now be used to administer vaccines as well.

“It’s fitting to be here at Russell Auditorium, a place that normally hosts weddings, baby showers, and other types of gatherings. Vaccines are our way to get that life back,” James told reporters. 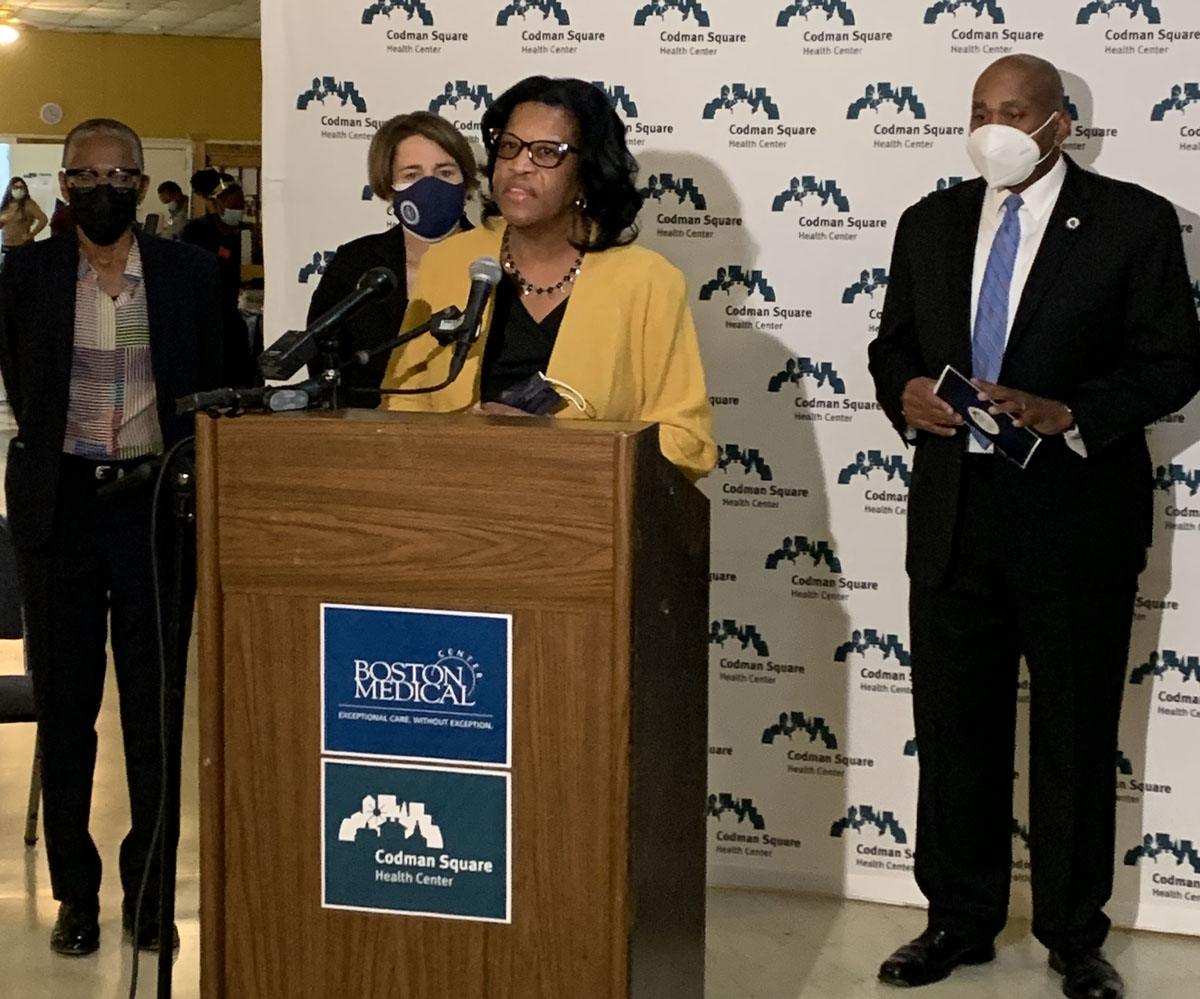 The Talbot Avenue facility has been a testing site since November through a collaboration among BMC, Codman Square Health Center, and the George Washington Carver Grand Lodge. It is currently vaccinating around 100 people per day, with plans to ramp up to 250 next week and eventually reach capacity of 1,000 per day.

Cotterell described the ongoing development of a “network of vaccine clinics” in Dorchester, noting that eligible patients at Codman Square, Dot House, Harbor Health, and Harvard Street Health Centers can all sign up for vaccination appointments at the Russell Auditorium location.

“Here it’s a one-stop shop, it’s less chaotic in general than the health center, and there’s ample parking,” said Cotterell, explaining why they chose a centralized location rather than at CSHC itself. “This location is dedicated exclusively to vaccinations; it’s laid out in a streamlined way, and it’s just overall much more efficient.”

Healey hailed the teamwork of local leaders and organizations to get the site up and running and “make sure those closest to the pain get the vaccines they need. These community-based sites are ‘critical’ because they have established relationships with members of the community, they are trusted, and they speak the languages of the community. It’s a direct line to the residents.”

Healey said she met two sisters, ages 91 and 82, who were waiting in the observation area after receiving the vaccine. “They’re not able to sign up online or drive out to a mass vaccination site in Foxborough,” she pointed out. “We have to account for those barriers.”

Rep. Holmes, touting the importance of viewing all matters through an “equity lens,” urged vigilance and called for further measures to reverse health disparities long rooted in systemic racism.

“We have vaccines, but this fight is not over,” he said. “We need to combat hesitancy, we need to continue to increase accessibility. This is not the time to let up on the gas.”