Congresswoman Ayanna Pressley today urged Gov. Charlie Baker to step up the Commonwealth’s vaccine rollout in her district, warning him that the state’s current efforts “continue to fall short.”

“Despite the fact that we continue to see record spikes in cases across the Commonwealth, I remain gravely concerned that your administration’s vaccination and response plans continue to fall short of serving the needs of the communities most impacted, including those in my Congressional district,” Pressley wrote in the letter dated Jan. 27.

“It is absolutely vital that policymakers at all levels of government heed the calls of the communities most impacted by this pandemic and the public health experts that are fighting this virus on the frontlines.”

Pressley cited reports that detail growing racial disparities in vaccination and vaccine access across the state, the CDC’s ranking of Massachusetts at 29th in the nation for vaccine deployment, and data from the Massachusetts Department of Public Health showing that Black and Latinx residents make up less than 3 and 4 percent, respectively, of those who have been vaccinated thus far, compared to 60 percent of white residents.

Pressley urged Baker to update the state’s vaccine deployment plan to address inequities and to do more to build trust in Black and Latinx communities. Specifically, she urged Baker to commit to prioritize hard-hit neighborhoods and begin building out “robust community-centered programs to begin delivering and administering vaccines in hot spot communities.”

Last week, Pressley told the Reporter that she was frustrated with the state’s vaccination rollout so far, characterizing it as “delayed and disorganized” and calling for a better-coordinated effort to get the medication to people in city neighborhoods hit hardest by Covid-19.

“How can Massachusetts be ranked 29th in the nation for vaccine distribution when we are a healthcare Mecca and have the infrastructure,” she said in an interview with the Reporter last Thursday, adding, “We’ve got to center equity and prioritize vaccinations in our hardest hit communities. This is about saving lives and I just feel that the vaccine rollout to date, frankly, has been delayed and disorganized.”

In today’s letter, Pressley again pointed to the central role that she wants community health centers to play. She urged that the state mount a public awareness campaign in partnership with trusted medical professionals and community voices to dispel misinformation about the vaccine and build trust in Black and brown communities.

Massachusetts is in the first phase of a vaccine plan that began last month with people in long-term care facilities, frontline medical workers and, more recently, first responders.

On Monday, Gov. Charlie Baker detailed plans to move residents 65 or older higher up in the state’s prioritization plan for vaccinations and ramp up distribution infrastructure in the coming weeks.

Baker announced plans to add dozens of new vaccine sites by Feb, 15, including the Reggie Lewis Center at Roxbury Community College, which will open next week as a mass vaccination site for eligible Bostonians, in addition to the site at Fenway Park. First Parish Dorchester will also come online as a vaccine site next week, according to the church.

The governor also said that beginning Feb. 1, residents 75 and older will become eligible to be vaccinated for covid-19 as the state opens the second phase of its vaccine distribution plan. Residents 65 and older have been bumped up in priority in Phase 2, and will join people with two or more high-risk conditions in the second group to become eligible in the next phase some time in February. 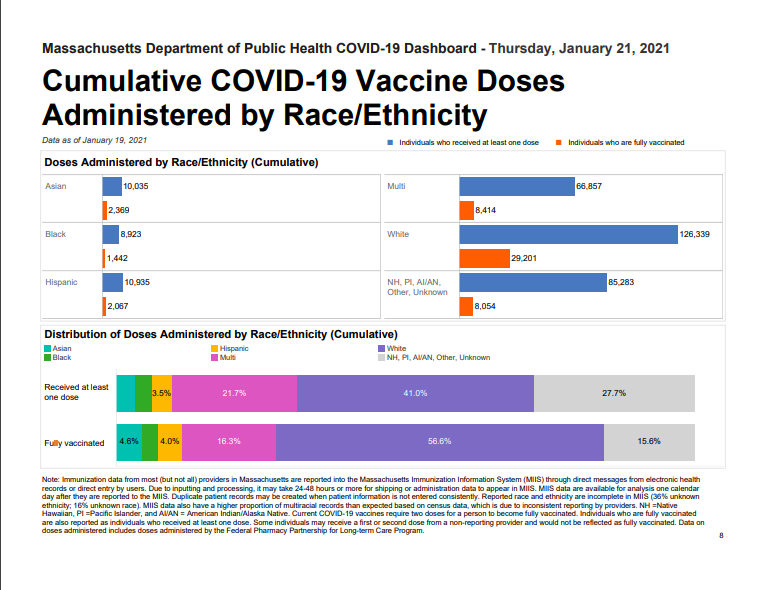 Pressley also pointed to President Joe Biden’s executive order aimed at ensuring an equitable pandemic response and recovery, and offered her partnership to continue pushing at the federal level for states and municipalities to have the resources necessary to equitably combat the pandemic.

“I stand ready to partner in any way to ensure our hardest hit communities are able to access the lifesaving resources and vaccinations necessary to combat this unprecedented pandemic,” she wrote.