Three weeks after Henderson Upper School principal Patricia Lampron was beaten unconscious on the sidewalk in front of the school — allegedly by a 9th grade student — parents, union leaders and city councillors sought to pressure BPS officials to do more to ensure safety of staff and students at the Croftland Avenue schoolhouse.

SEIU 888 leaders said they represent staff members, such as secretaries, at the Henderson and other schools. They claim a secretary at the Henderson was assaulted by a family member of a student one month before the attack on Lampron. The secretary is still out on disability from the incident, according to Tom McKeever, the union president, who urged Boston Public Schools (BPS) officials to step up their urgency on the matter.

“Our ask is we want the superintendent to establish a comprehensive action plan on the position of BPS and how they’re going to address worker safety for students and the workers within the schools,” McKeever said. “We have many outstanding issues with BPS and nothing has been settled.”

BPS spokesman Jonathan Palumbo — also on hand at the event— said the district has been “working around the clock” since the incident happened. He said the union is welcome to speak with them about any outstanding issues at the Henderson or any school.

“Our door is open,” he said. “We are always willing to meet with individuals who have ideas. I know their flier said we should already have ideas. I’ve just outlined a list of priorities we’ve been implementing. We would love to hear if they have additional thoughts.”

But other speakers at the rally raised concerns about specific safety concerns that they claim are unresolved, including allegations that some security cameras do not work properly and that metal detectors were unplugged and pushed to a corner of the cafeteria.

“We’re hearing (staff) are told not to call 9-1-1,” said Councillor Flaherty. “I believe in this particular incident here the 9-1-1 call came from a student’s cell phone. It’s completely unacceptable. We need to put a focus on safety in our schools and all of our children should be able to come to and from school and be completely safe.”

Added Councillor Frank Baker: “I’m here today to give voice to the voiceless. There are literally children in this school that cannot speak for themselves. If something happens to them, they cannot come home and say to mom and dad ‘I was bullied today.’”

Maggie Mancuso, a Dorchester resident who spoke at the rally, pulled her three kids out of the school earlier in the year.

“I felt the safety of the children wasn’t there and the teachers weren’t being supported,” she said. “I feel the (Boston Teacher’s Union) BTU and Boston Public Schools (BPS) don’t care about families and teachers. I wasn’t going to risk the safety of my kids and we left.”

Mancuso continued: “What happened to Patricia Lampron was avoidable. BPS and BTU doesn’t support families or teachers on the ground. Patricia Lampron asked for help and support multiple, multiple times and she was ignored. Shame on the City. It’s their fault…If principals and teachers and secretaries are getting restraining orders on a family, they are screaming for help.”

Councillor-elect Erin Murphy said the schools and the BTU need to share information that isn’t being shared about incidents in the schools.

“We need the information to help make the solutions and come together so kids are safe in all schools across the City,” said Murphy, herself a former BPS teacher.

The Reporter has an open request into school officials for incident information that has been outstanding since Nov. 5 – though it has been communicated that the information is in hand, but not ready for release.

At one point in the rally, when the potential need for metal detectors at the school was being discussed, a testy exchange ensued when a member of the media challenged the idea of creating a “prison environment” with cameras and metal detectors.

Though Baker said he doesn’t agree with metal detectors, he pushed back on the idea that such measures would create a “prison environment.”

“No way, that’s a heavy thing to say,” said Baker. “A prison? Really? Are they being locked up in here?” 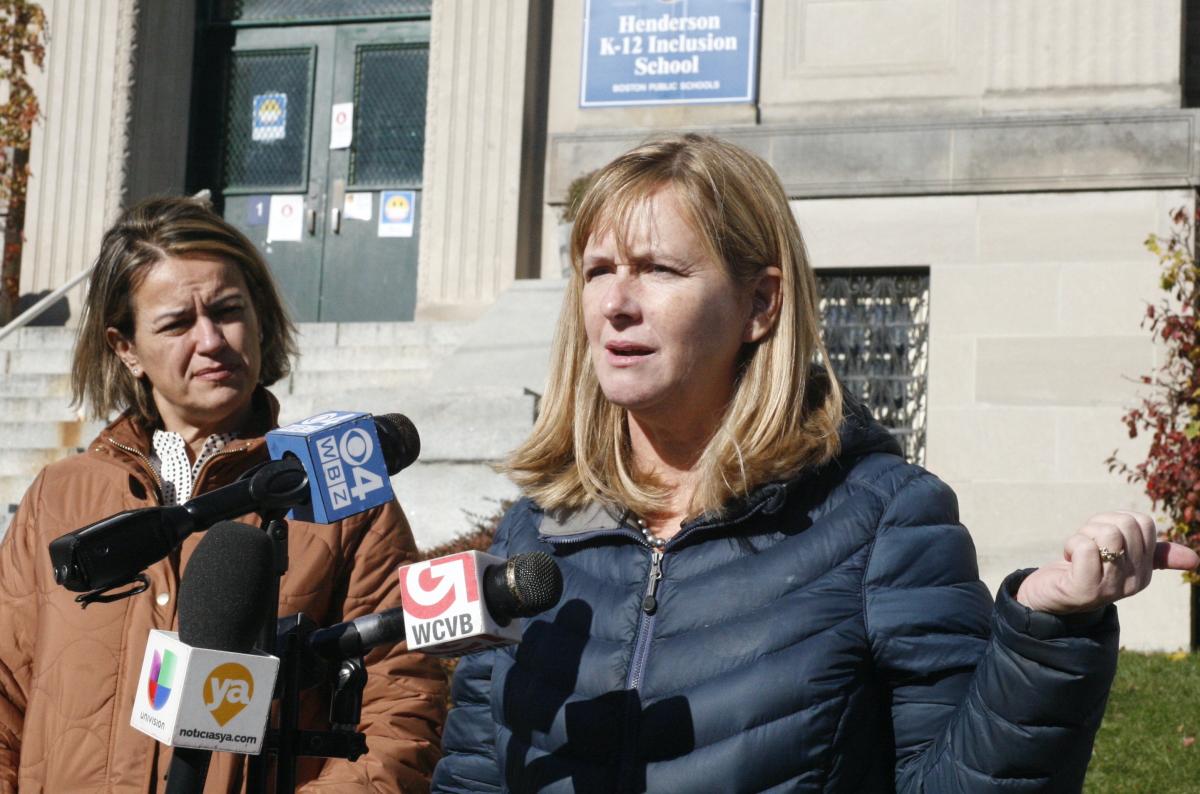 Responded the reporter, “I’m just saying you don’t want a school environment that is similar to a prison.”

“Nobody’s talking about a prison environment here,” said Baker. “We’re talking about safety. However, you want to say it, school safety officers, put them in khakis and a sensible shirt, let’s do that. But they need to be able to do their job. If they can’t, this is what we’re having here. We have no expectations for the kids coming into here.

“When the top person can get her head bashed in, where’s the respect coming up?” Baker continued. “And you’re going to talk about prison? There’s nobody in cuffs in here. There’s no cells in here. This is a school and you should be able to bring your kids here safely.”

Palumbo, the BPS official, countered that since the Nov. 3 incident, they have changed the arrival and dismissal policies at the Henderson, adding visible “caring adults” from the staff to make students feel safe. He also said BPS brought in an experienced high school leader who works in the Central Office to help enhance safety, including having all staff wear name tags and instituting a solid check in and check out every day.

He said they have also been clear on what would happen if there are incidents, including one at the Henderson last week where a young student found a folding knife on the ground walking to school. That student brought it into the school and was showing it off. He said they acted quickly, resolved the situation, deployed resources to the student and communicated the matter to parents.

“There are some incidents that happen once in a while,” he said. “The most important thing when those incidents happen is to make sure we work with students and families and get a notification out so we’re clear and transparent and providing relevant information.”

On the matter of metal detectors, Palumbo said they are provided to all high schools with a directive to use them. However, some school leaders feel it is inappropriate and that is considered.

“…We work on a daily basis with leaders of schools to make sure what we’re doing at schools every day is seen as a safety measure and not a putative measure,” he said. “It’s about school safety and not about punishing students or criminalizing students along the way.”

He reiterated that no directive has come from the superintendent’s office discouraging teachers or staff not to call 9-1-1 if an incident happens.

Mancuso, the Dorchester parent, said that while her children left the Henderson for a smaller BPS school, she still felt it important to come back to the Henderson to support Lampron and the teachers there.

“This amount of disrespect starts at home,” she said. “Kindness goes a long way…The people that sit behind desks don’t know what’s going on. They are out of touch with those working on the ground.”

BPS 'still working' to resolve ‘School Safety’ officer licensing
Boston Public School (BPS) spokesman Jonathan Palumbo told reporters after the Nov. 24 rally that they are actively hiring school safety officers in an attempt to have one or two in each high school and middle school in the city. Palumbo also said the district is working towards resolving the school officer licensing troubles that materialized last summer with the Police Reform Bill implementation.

“What we’re working to do is to finalize the Memorandum of Understanding (MOU) with the Boston Police Department and list out exactly who is responsible for what parts,” Palumbo said. “We’re working on that in real time and hope to have an update soon.

“I think school districts and municipal agencies are trying to find the best way to implement it so we can continue to promote safety but also recognize the law did call for explicit changes in the way school safety officers work in buildings,” he continued.

Palumbo said there are a number of open positions for Safety Officers and they are hiring right now. That has led to issues with deployment and making sure there is coverage in all schools.

“We have a coverage plan, but (all schools) might not have a dedicated one full-time,” he said. “If they are a high-priority school, we are able to re-deploy and move them around.”

On the subject, Councillor Frank Baker said whatever the plan is for Safety Officers, alluding to the MOU, he said it’s time for both parties to get moving on it and stop dragging their feet.

“When Patricia was getting beat up over here the safety officer could not put his hands on the assailant,” he said. “There’s a problem there…Whatever we’re going to call them, safety officers, we need some plan of whose protecting our children and the administrators. Whatever it’s going to be, let’s start moving on it.”

The Boston School Police dissolved last July when a state police reform bill required them to get a higher-level of licensure, and their pathway to licensure was not provided by BPS and the BPD. Instead, the Office of School Safety was formed, giving way to safety officers that no longer had the ability to arrest or dispel physical conflicts.
- SETH DANIEL