A sketch of the inspiration for TLee Development’s proposed restoration of the Post Office building in Fields Corner, most prominently including bringing back the historic windows that once graced the former Music Hall and community gathering space.
Rendering courtesy Historic Boston, Inc.

Neighbors in Fields Corner are weighing the pros and cons of developer Travis Lee’s latest plan to transform the look and function of the long-time Post Office building at the nexus of the neighborhood at Adams Street and Dorchester Avenue.

The Fields Corner Civic Association (FCCA) heard an initial plan from TLee Development on Sept. 7 for restoring the structure, which the developer is calling the Musical Hall building, into 40 units of affordable home-ownership opportunities.

The developer would retain all of the ground floor retail currently in place, including the Fields Corner Post Office, which USPS Spokesman Stephen Doherty said is fully leased until 2025, and put up a five-story addition behind the existing building where the remnants of the old Fields House currently stand.

FCCA President Hiep Chu said neighbors are excited that the restoration would open up old windows that have been bricked off for decades.

“From the Fields Corner perspective, we had quite a few phone calls that expressed generally positive perspectives and looking for it to create more positive activity in Fields Corner, whatever that means to different people,” Chu said, noting that there were about 30 people on the Sept. 7 Zoom meeting.

“People have mixed feelings but not necessarily bad feelings,” he added. “This particular parcel contains much of the Fields Corner history going back hundreds of years… We’re kind of excited to see the next chapter for this.” 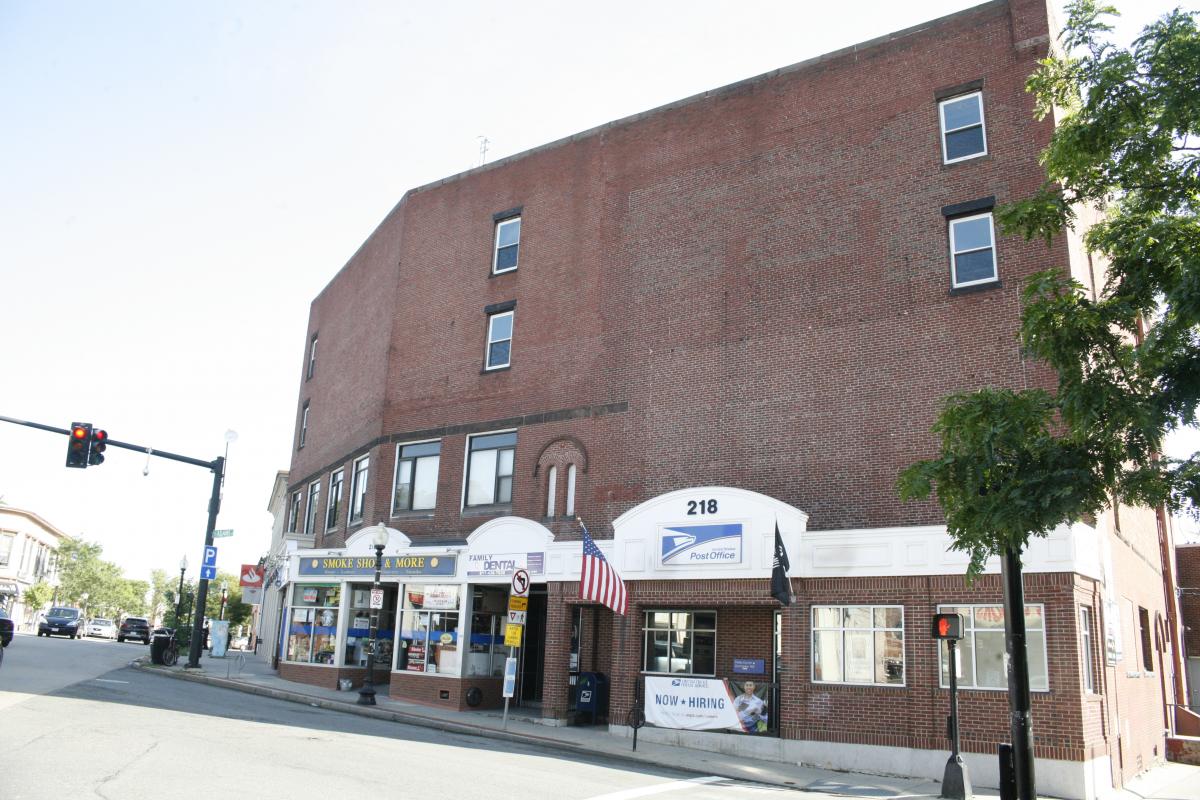 Above, the building in question at Adams Street and Dorchester Avenue. Seth Daniel image

Lee’s company has an option to purchase the building that runs through December.

“Our objective between now and December is to figure out if we can come up with a proposed project that has sufficient and substantial buy-in for the stakeholders,” Lee said. “We’ve shown the community the general size and scale and the numbers of units and there wasn’t a single person opposed. It doesn’t mean no one is opposed, but it’s always good when you present something and there aren’t five people immediately against it. ...We haven’t purchased it yet. If it doesn’t work out, it doesn’t work out.”

His proposal includes putting 20 units of affordable home-ownership units on the upper floors with a full restoration of the arched windows that have likely been bricked over for more than a century. The windows were prominent in the part of the building on the Adams Street side when it was the Dorchester Music Hall for a short period in the 1890s and early in the 20th century.

Lee said nothing is left on the property of the grand days of the Music Hall, which was ultimately converted to a commercial building about 100 years ago by the O’Hearn Storage Company.

“We’re not proposing to bring the historic music hall back to life; it’s 100 percent gone,” he said. “But what we can do is bring the windows back to life, and that is the intent, and it will be a feat unto itself. It will be difficult.”

The envelope of the building won’t change under his plan, Lee said, but the five floors would likely be converted to four floors. He predicted that the units would be priced between $225,000 and the upper $300,000 range, which is far below the average condo sale in Dorchester of $570,000, he said.

Many years ago, the Post Office on the site was in jeopardy of being closed, but the USPS’s Doherty and Lee said that that won’t happen with this development.

“The tenants that are there we plan to tee up for long-term success,” Lee said. “The Post Office has been there for 70 years and we intend on keeping it there for years and years to come. We don’t intend to price them out of the neighborhood they’ve served for so long.”

In the final part of the development, the five-story addition behind the original building would contain another 20 units of affordable home-ownership condos. That building would be about 15 feet taller than the Post Office building and would be built on what is now a parking lot containing the remains of the old Fields House.

That last part has been undertaken with some careful treading of water, as both Lee and the Dorchester Historical Society (DHS) have engaged in discussions on how it might be possible to preserve the house or the family’s story.

The Fieldses came to New England in the 1600s, and bought land in what is now Fields Corner in the 1700s, eventually opening a store about where the Post Office is now. They had a stately wooden home fronting Dorchester Avenue for a long time, but when the Post Office was built in the late 1800s, they moved the house to the back of the lot. The historic house has been bricked over and a loading dock added to the site. Very little of the stately structure remains, though the window openings do remain similar.

Earl Taylor, president of DHS, said the society sees the development in two ways, noting that having the Post Office building developed seems like a good idea. But, he said, they would like to see the Fields House preserved.

“It would be a great advantage to the neighborhood to have it developed in some way and I would think Travis Lee would be more sympathetic than others,” Taylor said. “It’s why Fields Corner is named Fields Corner…It’s been moved one time from Dorchester Avenue to where it is now…I think it needs to stay in Fields Corner and I don’t know where you find a lot near that intersection, so it is a quandary. … It’s an historically significant building, at least in my mind.”

Lee said he would like to preserve the Fields family story and relics from the home in a curated museum or community gathering space in the addition, but probably would not be able to save the remnants of the structure and go forward with the overall development.

He added that it will be a careful walk to be able to tell the story respectfully, but not keep the building, a structure that he says very few people actually know about. “It’s more than preserving it, because it’s hidden. You preserve meat because you want it to remain how it is. We don’t want [the building] to remain how it is; we want it to be more accessible,” he said.

Taylor said they haven’t filed any petitions with Boston Landmarks Commission for the property and will continue to work with Lee on the status of the home.

Lee’s company has successfully developed properties in the West of Washington and Talbot Avenue area and in Fields Corners, including the Lenane Building across from the Post Office.