The new Edgewater Food Forest on Burmah Street in Mattapan will feature a community garden, a pavilion/gathering space and even a walnut processing station. Dan Sheehan photo

A new food forest is growing in Mattapan this week, the result of an effort by volunteers who deployed in groups to locations across the city last weekend for projects organized by Rebuilding Together Boston, a community-focused non-profit service organization celebrating its 30th year of facilitating such events.

On Saturday afternoon, one of the teams was busy transforming what had previously been an unused empty lot at 20 Burmah Street into the new Edgewater Food Forest. Encouraged by warm weather and abundant sunshine, a group composed of volunteers from Boston College and the local tech company Verndale joined members of the Boston Food Forest Coalition (BFFC) in clearing brush from the plot, laying down a stone pathway, and planting seedlings.

The project is some two years in the making. After BFFC, a community land trust, acquired the land from the city, the Department of Neighborhood Development chipped in funds for a reimagining of the space to realize the vision of Vivien Morris and Jessie Dambreville, two members of the Edgewater Neighborhood Association who were the main drivers of the project.

Dambreville, who grew up just beside the space at the end of Burmah Street, told the Reporter that she had long wished for the empty lot to be repurposed.

“Honestly, this was my dream,” she said. “I would use this as a shortcut when I was a kid, but it was always just wasted space. My bedroom is right there, so this will be the first thing I see in the morning and the last thing I see at night. It’s just so exciting; this weekend has been unbelievable.”

Morris, who lives two blocks from the site, said the patch of land has been unused since at least the 1970s. “No one knows of anything ever having been here.” But after the Edgewater Neighborhood Association forged connections with BFFC, Morris saw an opportunity to build greater camaraderie among neighbors and at the same time make improvements to the community.

“The idea with this project is to turn this plot, which has been an eyesore, into something that will be a source of positive interactions among neighbors as well as healthy food,” she explained. “There’s nothing like this right now in Mattapan, so this would be an amazing contribution to the community overall.” 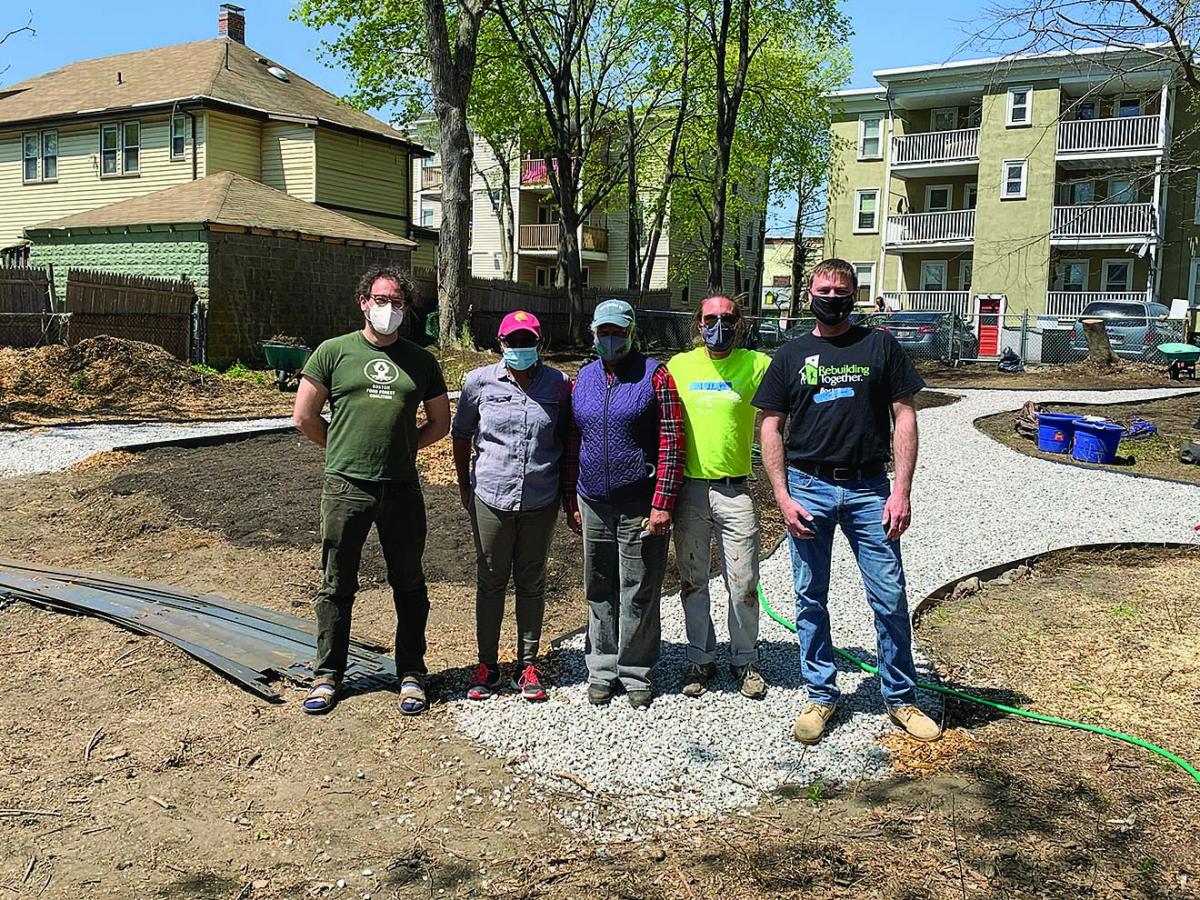 In addition to creating a garden filled with perennials and shrubs, a wooden pavilion for hosting community events, yoga classes, and live music, the project will also preserve a number of black walnut trees indigenous to the neighborhood and even provide a walnut-processing station to help neighbors make the most of that natural resource.

“There are a lot of black walnuts in the neighborhood, and we want people to actually be able to harvest them and learn ways to cook with them; they’re a really good source of protein and fiber,” noted Morris.

Incorporating the trees into the design of the food forest, explained BFFC director Orion Kriegman, is a central principle of permaculture: “to disturb the land as little as possible and use the resources that are on the land as much as possible.”

That approach can be a challenge in urban environments, where green space is scarce and real estate is at a premium. But food forests contain a multitude of positive traits, reasoned Kriegman, such as reconnecting people to the land, reducing the urban heat island effect, and promoting healthier eating habits, as well as the numerous mental health benefits linked to open green space.

Unlocking the potential of these unused parcels around the city that are unfit for housing or commercial development could be key to planning a more climate resilient Boston, he said.

“We’re planting seeds of hope for the future. Yes, the world’s changing, the climate’s changing, we don’t know exactly what’s going to grow here 10-20 years from now. But that’s the point, we’ve got to get out here and start experimenting, invite young people into the process and say this is the world you’re inheriting, and this is how we’re going to heal it. ...No single food forest is going to solve climate change, but it starts a process where people can move out of their anxiety into action, and after that who knows where it will take them.”

Another impact of the new forest? Changing how Mattapan is perceived by the general public. Dambreville said she hopes initiatives like this will help others discover the natural assets that their neighborhood offers.

“There’s a lot of beauty in Mattapan that people forget about, and I want to help bring it out, and for the whole city to share it. There’s a lot of amazing green space here; I want it to be a destination for the rest of the city.”