One of the first new Red Line trains is shown being worked on in December 2020. Photo courtesy MBTA

‘Something acting abnormally’ within turning operation

The MBTA’s newest Red and Orange Line trains will remain shelved after an investigation into a March 16 derailment identified “something acting abnormally” within their truck frames, officials said.

In the latest setback for the CRRC-manufactured subway cars set to replace the entire Red and Orange Line fleets, investigators have found that an unusual issue played a major role in the derailment: the more the newer vehicles travel, the harder it is to turn the truck frames connecting the cars to the wheels.

A team of investigators, including engineers from the MBTA, CRRC and other companies involved in the manufacturing process, have been combing through the vehicles since one of the Orange Line cars went off the rails at Wellington Station on March 16. No one was injured in the incident.

Engineers built a test rig, which Gonneville described as “essentially like an air hockey table,” allowing them to calculate the rotational forces pressing on the truck frame and to compare data from vehicles with different mileages.

The probe zeroed in on pieces known as side bearer pads, which work with other components to regulate the truck’s rotational force as the train moves along the tracks. As those pads wear down, Gonneville said, the coefficient of friction is increasing, meaning “they are gripping more as the pads begin to wear.”

While Gonneville stressed that investigators have found no brake-specific issues on the subway vehicles, he pointed to brake pads on a passenger automobile as a rough comparison. 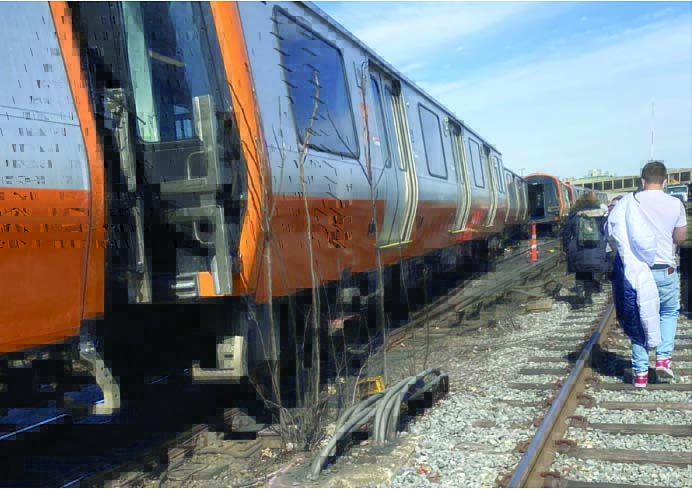 An Orange Line train is shown after it derailed in March 2021 near Wellington Station. Photo from @thetrueboston on Twitter via State House News Service

MBTA officials pulled all of their newest CRRC-manufactured subway trains – four on the Orange Line and one on the Red Line, each with six cars – from passenger service after the March 16 incident.

They will remain offline for the foreseeable future. Gonneville said the investigation is still continuing.

“These trains are going to remain out of service until we can truly identify that this is indeed the root cause and then once we identify the root cause, we will begin thinking about opportunities or reintroductions of the vehicles into service once it is safe to do so,” he said.

Gonneville told the Fiscal and Management Control Board he feels confident that he will have a clearer timeline to present at the board’s June 7 meeting. The MBTA will work with regulatory agencies, including the Department of Public Utilities, as it begins to consider relaunching the vehicles, he said.

“We would not even propose that yet until we have safely identified the root cause of this issue and then begin thinking about both short-term and long-term solutions to introducing these cars back into service,” Gonneville said.

The T plans to replace its entire aging Red and Orange Line fleets with all new cars manufactured by CRRC, in both cases slightly expanding the fleet size. CRRC is scheduled to deliver 152 Orange Line cars and 252 Red Line cars at a cost of roughly $1 billion.

The project is a central component of a nearly $2 billion Red and Orange Line overhaul the Baker administration is pursuing, which also features new signal infrastructure and shorter wait times between trains.

Since the MBTA awarded CRRC the manufacturing contract in 2014, the project has hit multiple speedbumps.

The arrival of the first new Orange Line train came in August 2019, seven months behind the original schedule.

MBTA officials pulled CRRC Orange Line trains from service to resolve issues on at least three occasions before the March 16 derailment: in September 2019, after a door leaf opened while one of the cars was moving; in November 2019, because of a noise emanating from the pads that interface between the cars and wheels; and in March 2020, due to faulty bolsters.

Gonneville said Monday that the November 2019 problem with pads involved “related components” and “related assemblies” to the current rotational force issue but is otherwise separate.

“This is a completely different issue and this is something that, with the higher mileage of these vehicles now, we are beginning to see,” he said.
The cars on the train that derailed in March had 28,168 miles on them, according to a T spokesman, while another pair of new cars had 29,673 miles and a third had 34,715 miles.

CRRC is set to deliver cars on a rolling basis, and under the original contract, the T expected to have its complete Orange Line fleet by January 2022 and Red Line fleet by September 2023. In October, MBTA officials announced a major delay to the procurement, saying they now anticipate Orange Line delivery to be done in April 2023 and Red Line delivery to be done in September 2024.

They attributed the setback to issues with material availability and staffing and training at the Springfield facility where CRRC assembles components produced in China.