The Archdiocese of Boston is exploring a sale of the St. Christopher property on Columbia Point as the neighborhood grapples with the early stages of a development boom on the peninsula.

The archdiocese has issued a request for proposals (RFP) for the church building and land at 265 Mt. Vernon Street. “The expectation is that any sale will include proposals for mixed-use redevelopment,” said the announcement, which was posted on Sunday.

The property, which sits on 3.3 acres, is assessed at $4.2 million on the city’s rolls. There is a rectory in addition to the church, as well as a shed-like structure.

In 2021, St. Christopher’s parish merged with St. Teresa of Calcutta parish, which is based at 800 Columbia Road. Part of the proceeds from a sale of the St. Christopher property will be funneled toward St. Teresa’s parish, with the Archdiocese calling such a move “necessary to maintain a stable and financially secure parish.”

Another recipient of funds from a sale will be St. John’s Seminary in Brighton, church officials said in the announcement, which also noted that any agreement would include a requirement that 6,000 square feet of space (out of the property’s 145,000 square feet) be set aside for possible worship or “multi-purpose space.”

The pastor of St. Teresa of Calcutta, Rev. John Ronaghan, said in a statement that the move to sell St. Christopher is a “sound financial decision,” calling the church on Columbia Point a “vastly under-utilized building.”

The move comes as the Catholic Church seeks to emerge from the pandemic, having taken a financial hit in the tens of millions of dollars. Some dioceses were able to tap taxpayer-supported coronavirus aid from the federal government, the Associated Press reported in 2020.

The coronavirus’s effects on church attendance was a double hit on the Catholic Church in general, and the Boston archdiocese in particular. Together, they have spent hundreds of millions of dollars over the last two decades dealing with clergy sex abuse claims.

In a note to parishioners, Ronaghan said the St. Christopher church is in need of “extensive repair.”

“While it is unclear what this property could gain in a sale, we believe it will allow us to realize a good return,” he said in his note.

At Monday’s noon Mass, there was some skepticism about the need for repairs. About 16 people were inside the church. On the wall facing the pews, there was a photo of Pope Francis, a few feet away from an advertisement for the 2022 film “Father Stu,” starring Dorchester’s Mark Wahlberg. 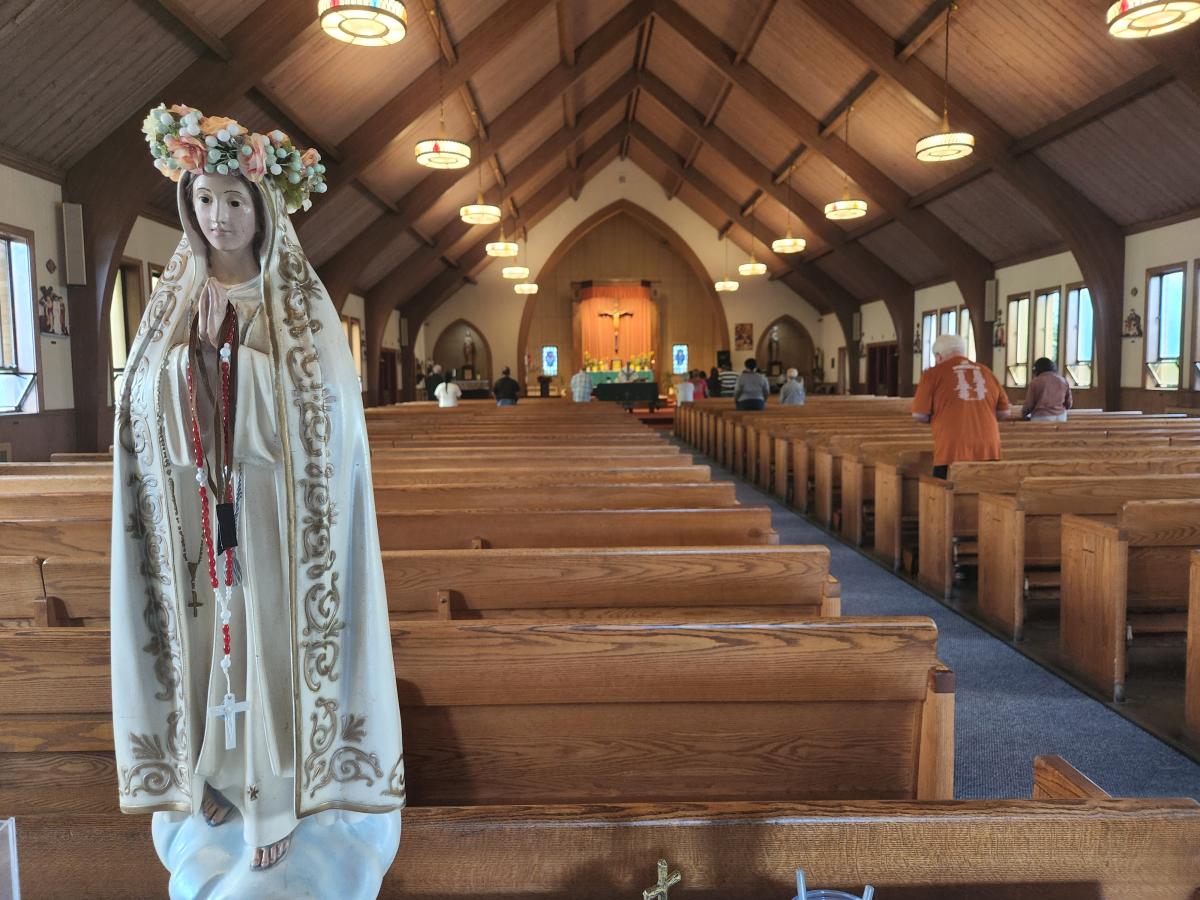 Bill Davulis, a 66-year-old Columbia Point resident, said in recent years the church has seen a new roof and a new boiler system, in addition to the renovation of the rectory next door. “Now they’re going to close the place because it needs extensive repairs?” he said.

With some resignation, he added there was likely little that could be done to block the sale. As for the 6,000 square feet of space that would be set aside for possible worship, “it’s not the same as having a church,” he said.

St. Christopher’s church is surrounded by parcels that are undergoing massive changes in the next decade. Across the street and to its left, there is the “Dorchester Bay City” proposal, a $5 billion effort to remake 36 acres, once home to the Bayside Expo Center, into nearly 2,000 residential units and 4.3 million square feet of office and research space, down the street from the UMass Boston campus and around the corner from Boston College High School.

To the right of the church, at 315 Mt. Vernon Street, the Boys & Girls Clubs of Dorchester and the Martin Richard Foundation are spending $55 million on building a facility focused on youth sports.