George Deveney Sr. and his wife Ryann Deveney are shown with their children Julie and George Jr. outside the Lower Mills Library.

“I want to say something beautiful about Dorchester with your portraits.”

That’s the simple, but lovely sentiment behind Mike Ritter’s ‘Beautiful Dot’ photo project, which he staged at six Boston Public Library branches in the neighborhood throughout the fall.

Ritter, 42, lives in the St. Mark’s Area of Dorchester with his wife and children and has been a freelance photographer for 18 years. His trade was hit hard by the pandemic— he booked just one job in 2020 after Covid restrictions kicked in ion March ’20. When life started to return to normal in 2021, Ritter — like most people— was anxious to get back into full gear. In fall 2021, he staged a one-day ‘Get Close’ portrait shoot in Dorchester Park. It proved to be a big success, with a couple of dozen families and individuals posing for his lens. 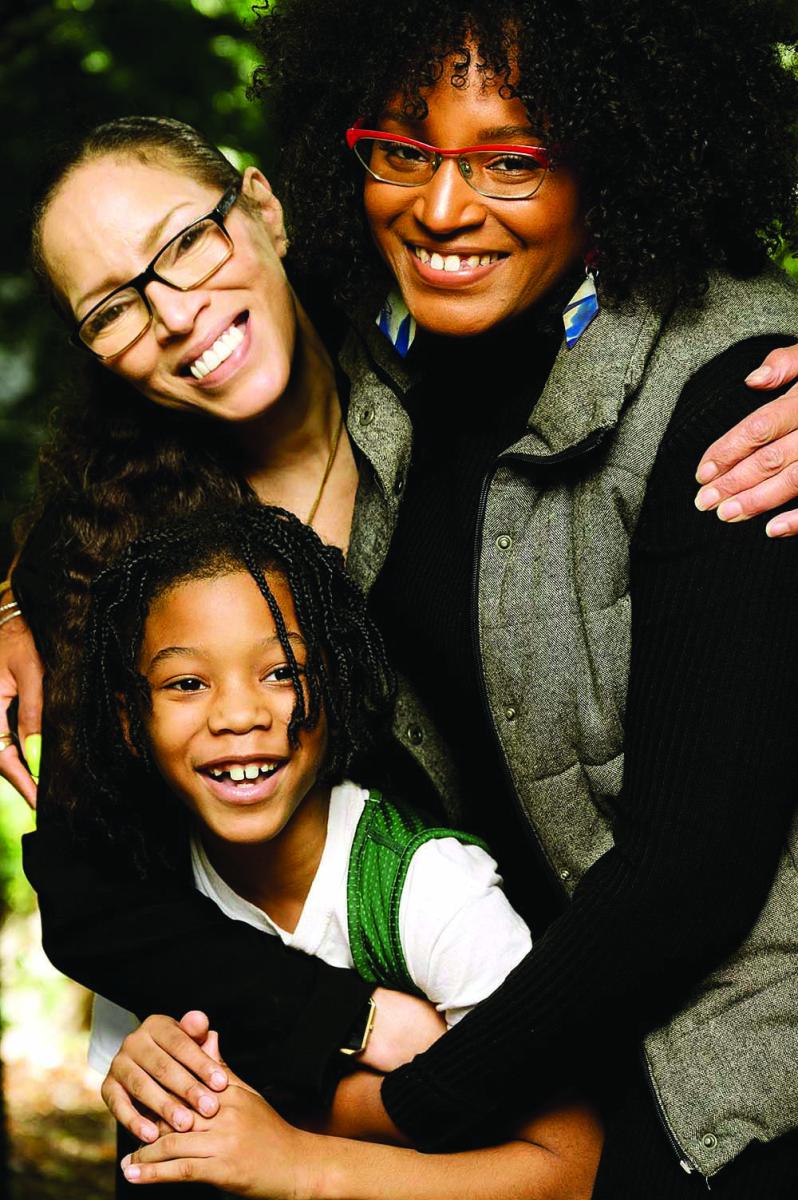 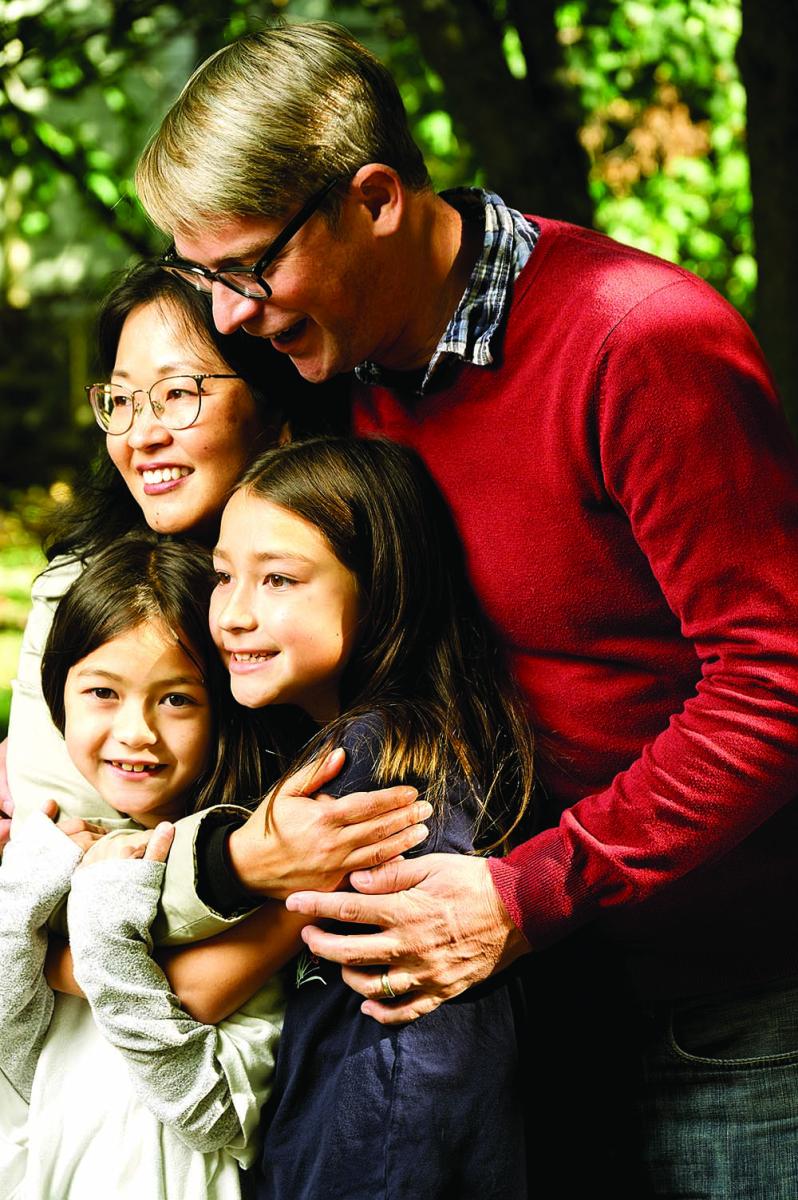 “After all those months of being told to stay apart, I wanted them to get close,” he said.

But, Ritter says, he found the one day-one location concept lacking in some ways. So, this year, he sought and secured a $10,000 city of Boston arts and culture grant to subsidize what has become ‘Beautiful Dot.’

The project, supported in part by the BPL and the Dorchester Reporter, included people from all corners of the city’s biggest neighborhood who arrived for their spotlight moment at branches in Lower Mills, Fields Corner, Codman Square, Adams Street, Grove Hall, and Uphams Corner.
The city grant “let me go hog wild,” he says.

“I feel like there’s a different energy of celebrating community and how we all weathered the storm one way or another With the six dates and six different locations spread out over the whole season, I really feel like we got so many people out from all different parts of Dorchester that we covered the entire neighborhood much better.”

The proof of Ritter’s success is in the proofs of the photographs themselves— and in quotes he recorded from willing participants talking about why they love Dorchester. 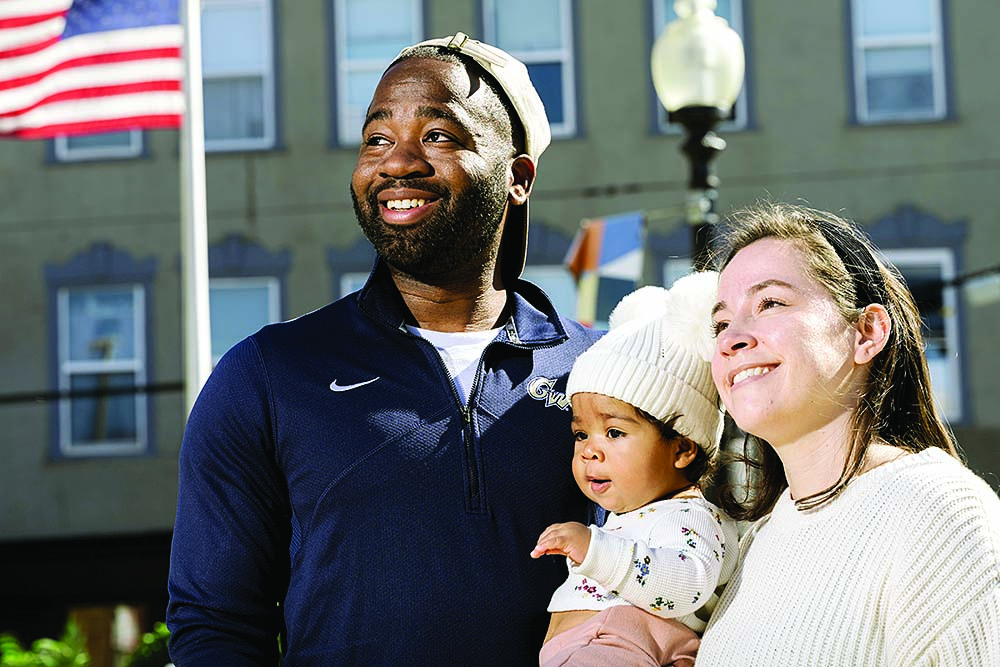 Pierre and Lilliam Doriscat and their daughter Mia in Fields Corner. 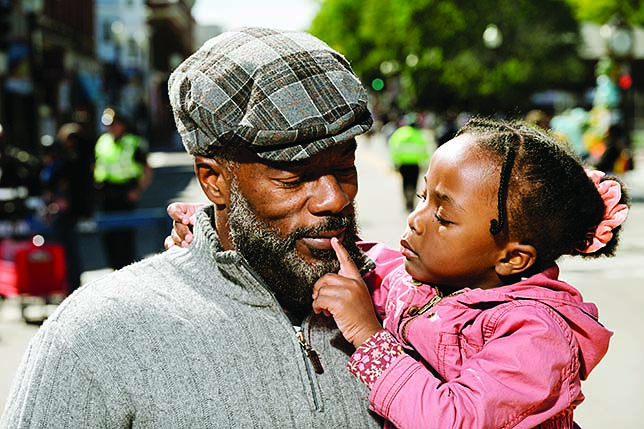 Hans Bastien of Dorchester and his daughter Ilani, 4, in Fields Corner. 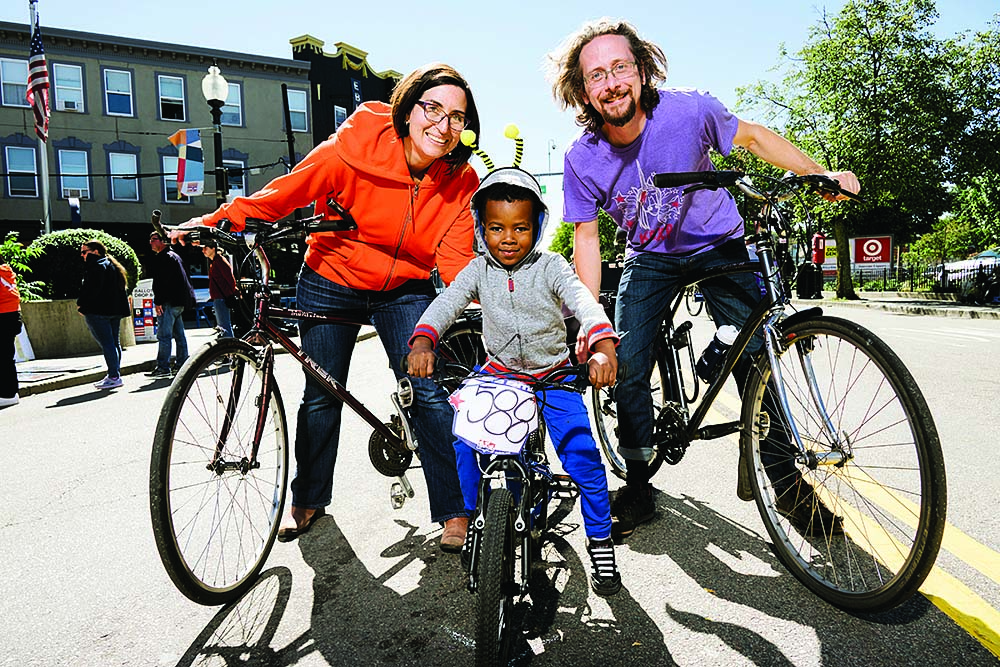 And, he says, the feedback from the subjects have included “some of the best compliments I’ve ever gotten personally or professionally. People really went out of their way to tell me what the photos meant to them.”

For some of the folks captured by Ritter’s trained lens, it was their first opportunity ever to get a professional photograph of their family or themselves. It was all done at no cost to the participants, who can use the photos for personal or professional use, with a credit to Ritter and his company, Ritterbin.com.

All of the library events had good turnouts, but the biggest draw was when Ritter set up his equipment on Dot Ave in front of the Fields Corner branch for the Open Streets Dorchester event in September. “It was great to piggy-back off of open streets and you had the sense that all of Dorchester was out there that day,” he said.

What’s next? All of the people he photographed have received their complimentary images. Ritter is planning an exhibition for next spring to show off the collection of portraits, ideally in a location in Boston.

“I’d like to get this in front of people who could use the exposure to this side of Dorchester. I’m still trying to sort out where it would be.” 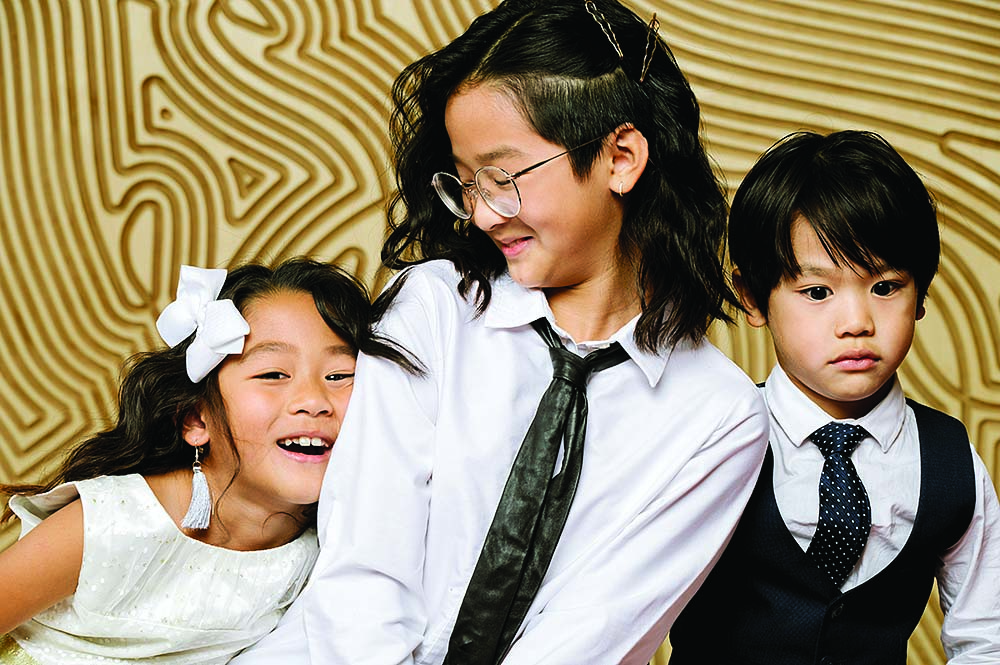 Zelda, Amelie, and Lincoln Pang at the Adams Street Library. 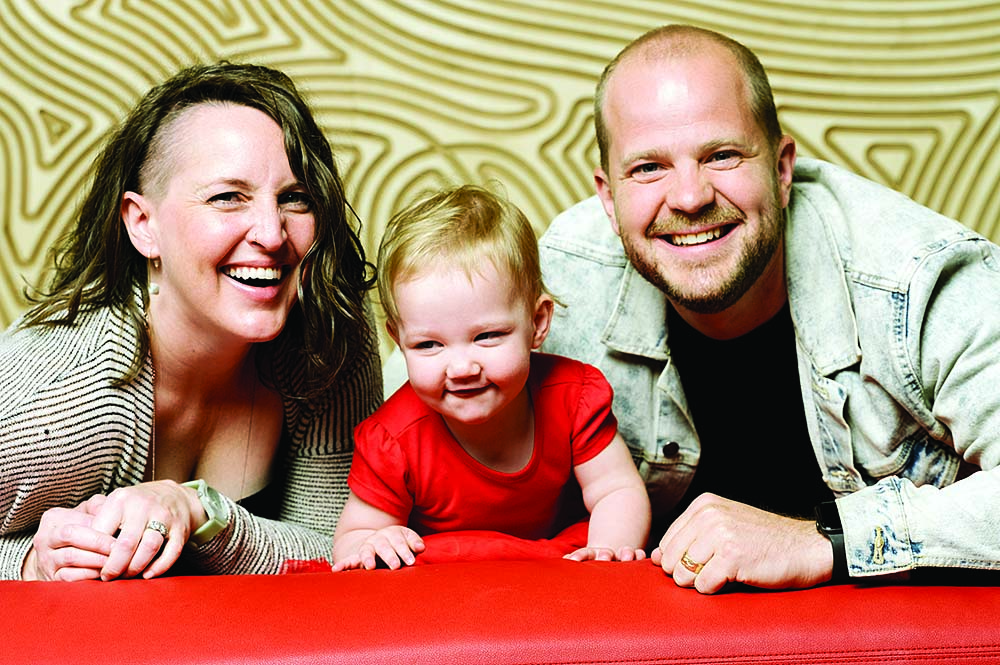 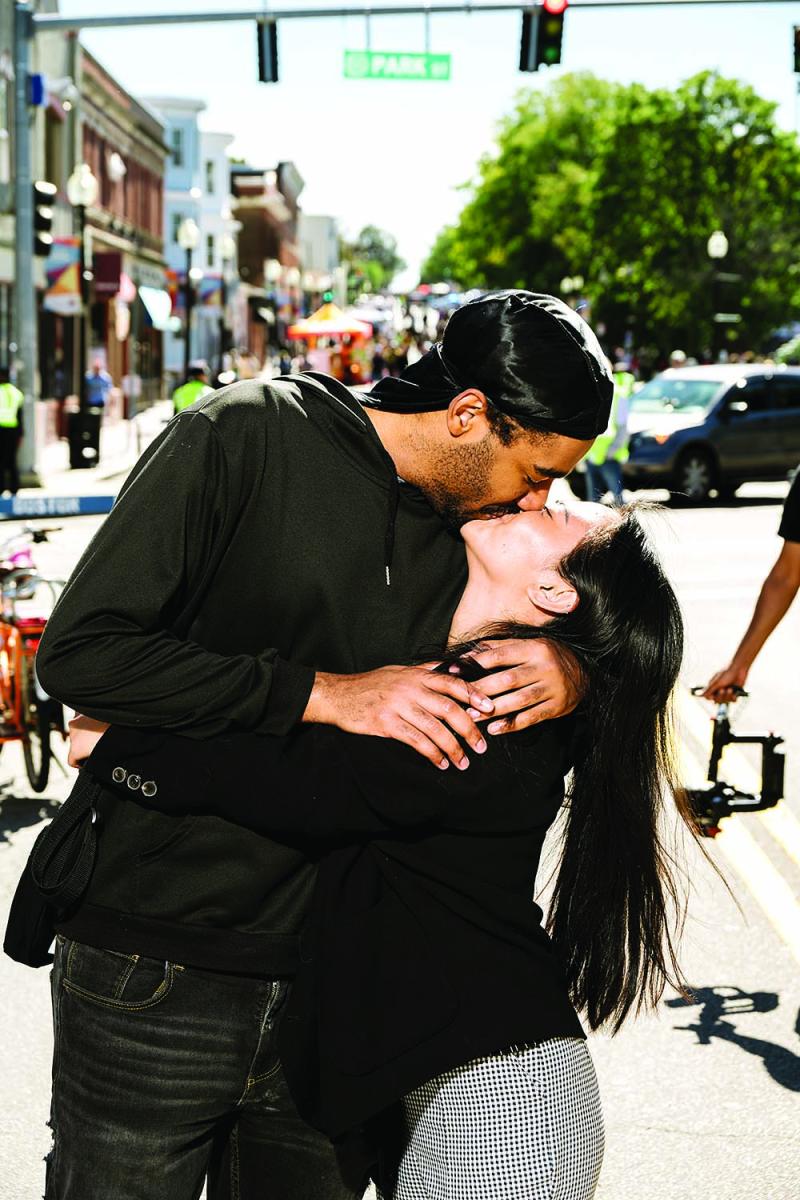 Hannah Enoy and Dashawn Taylor embraced and kissed during the Open Streets Dorchester event outside the Fields Corner branch library on Sept. 24. 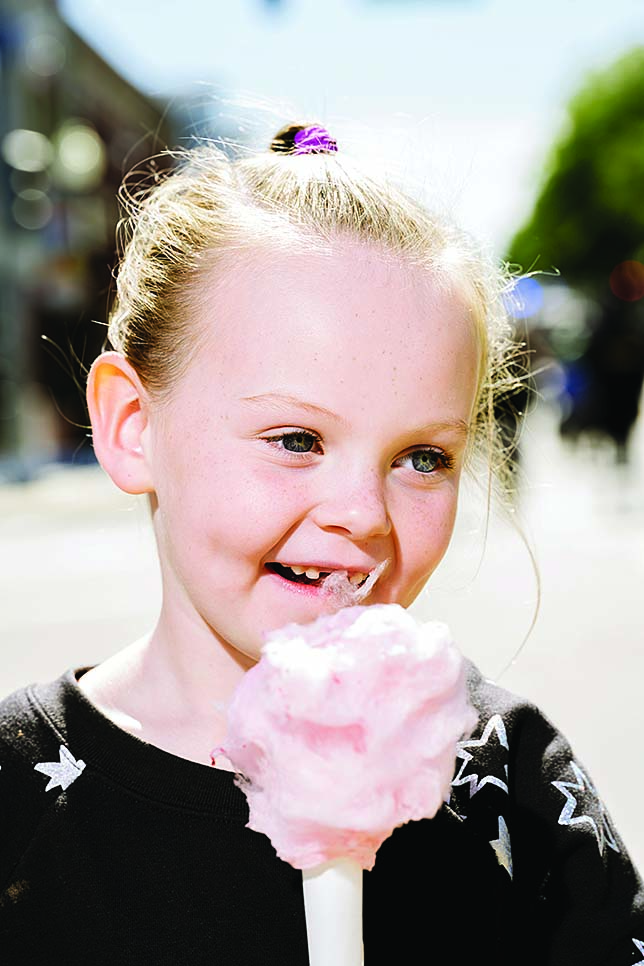 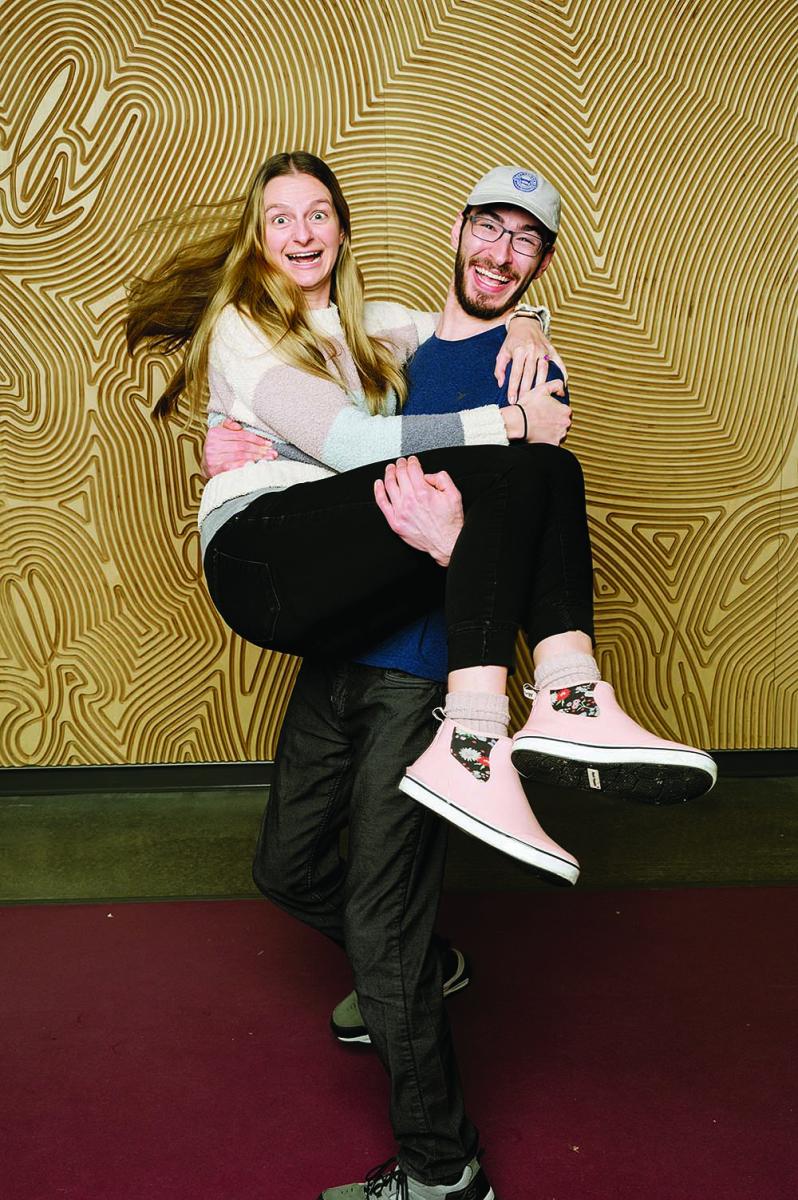 Jaclyn Setina and her fiancée Daniel Verlaque at the Adams Street branch library. 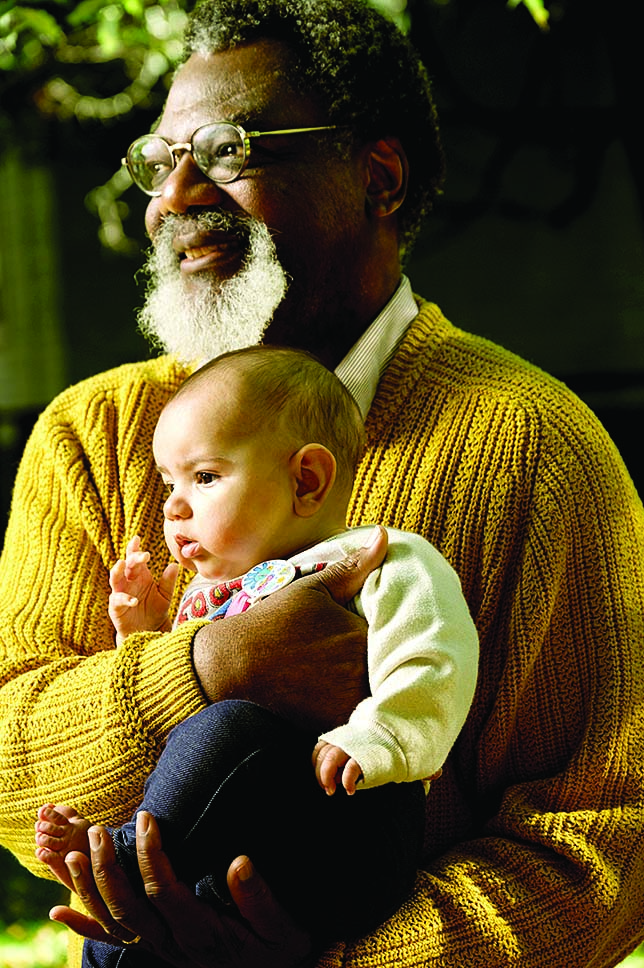 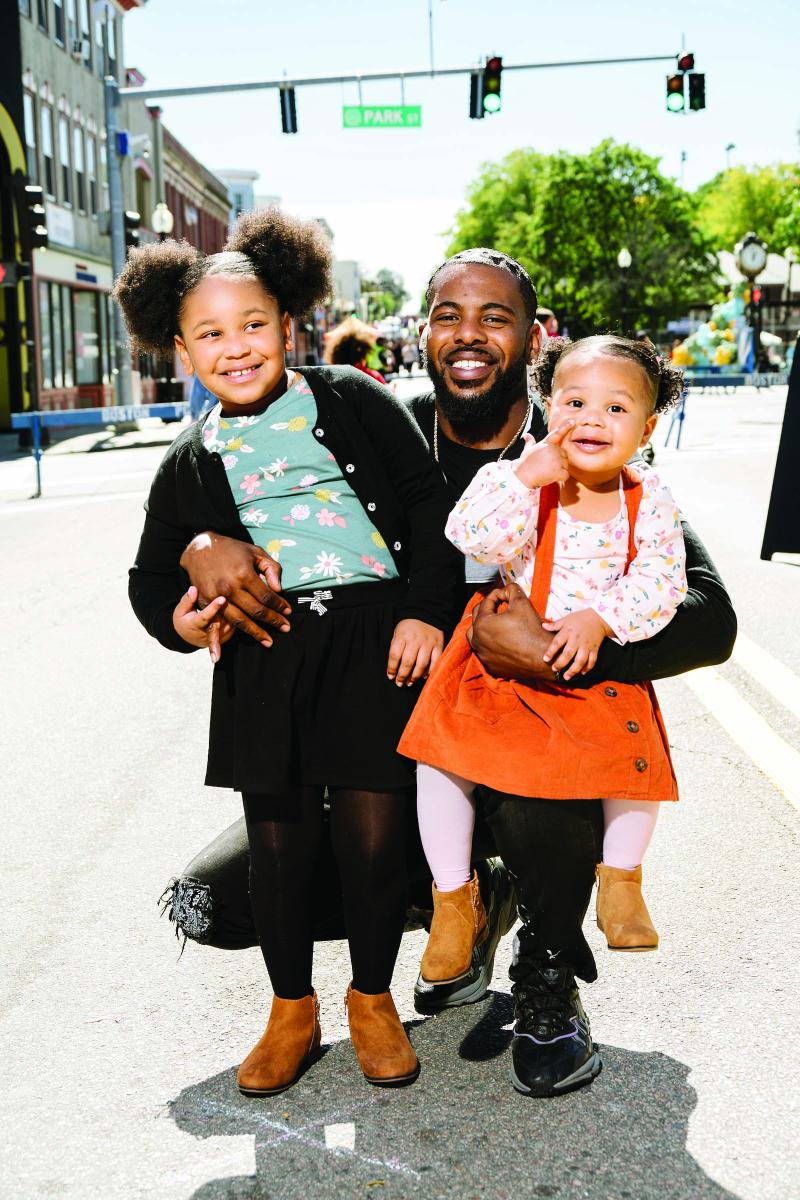 Darris Garraway with his daughters Isabella and Dalilah at the Open Streets event in Fields Corner. 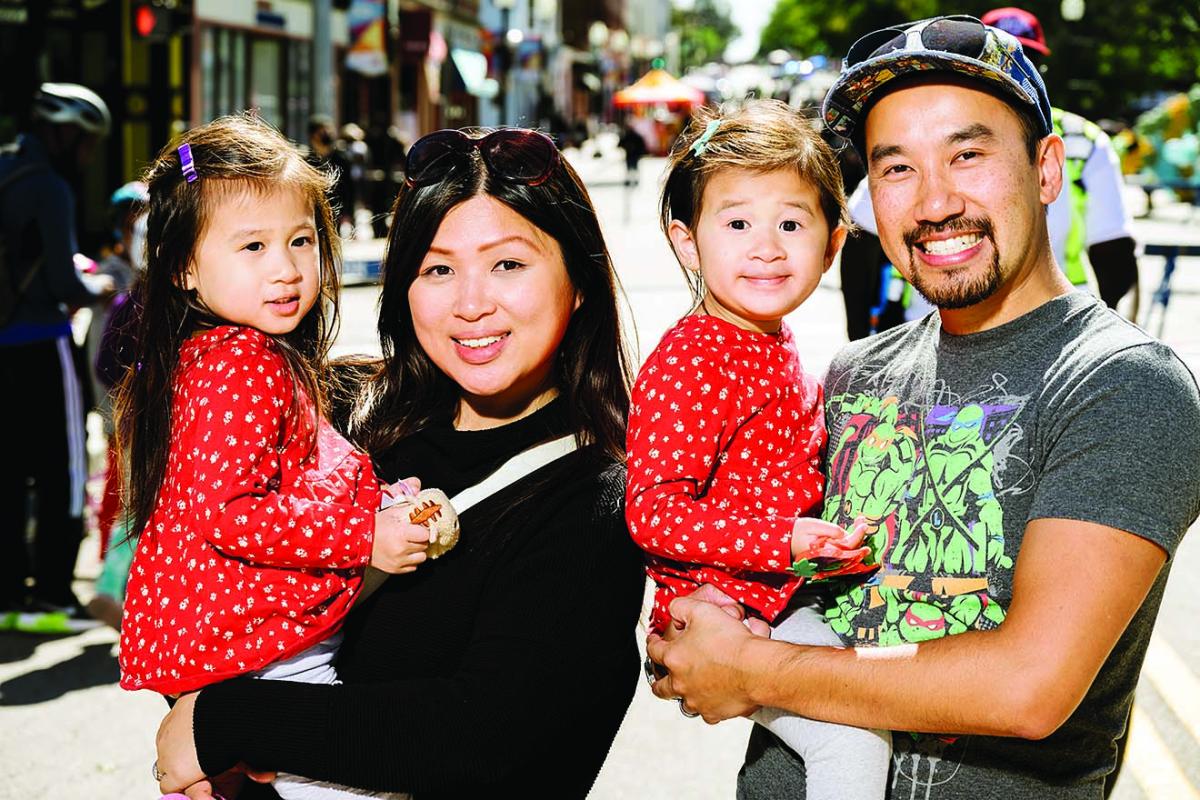 Linda Phan and Dave Tran with their identical twin daughters Jasmine and Josie in Fields Corner. 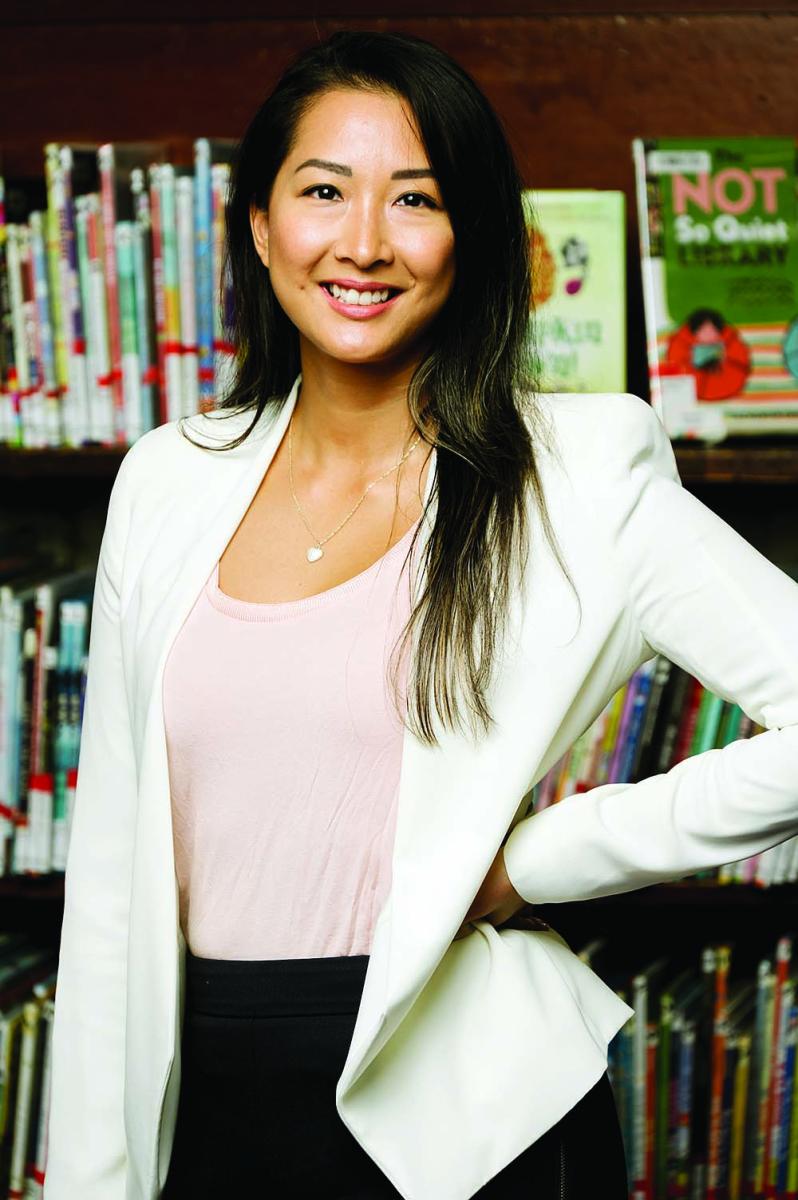 Jennifer Chams, photographed at Uphams Corner library. She loves the diversity in Dorchester. “Reminds me of New York, but slightly less chaotic.”

Reflections on ‘Beautiful Dot’
By Mike Ritter The Photographer

“In the majority of these portraits, I just see myself reacting to what was in front of me.  They’re candid, more genuine than just a pose.  Something happened in the confines of the pose where, to my eyes, something real was happening between the people in the portrait or a single person letting go of the efforts to present some version of themself and simply be themself.  It’s stuff I can’t ask for, or if I do, they can’t just do it on command.  They do it naturally, and if I’m quick I can capture it.

“In looking back over the images, they cover a good slice of Dorchester, from people who just recently moved from Southie to lifelong residents going back to at least the ‘60s.  Race, sexual orientation, income, immigration. They’re all in there. I feel they capture the diversity that is Dorchester. At least half the time in the interviews, diversity was mentioned as why people found Dorchester beautiful. They mentioned the food, the architecture, and offered some really kind comments about the community.

“Here are some responses I felt most poignant from the in-person interviews.

• Leonardo Paul, Lower Mills: “I love Dorchester.  I’ve lived here all my life, and I want to buy my house in Dorchester.”

• George Deveney Sr., Lower Mills: “It’s cliché, but it is a beautiful tapestry of people. Dorchester represents the real Boston - not just a neighborhood - Dorchester is a way of life!”

• Harir Oriakhail, Adams Village: “My mom means the world for me.  When I was 4 years old, my family and I emigrated from Afghanistan to the US.  It has been 6 years we have been living in Dorchester.  My school, the libraries, the playgrounds where I play with my friends, and the Boys and Girls Club of Dorchester where I can learn new things – they make Dorchester beautiful to me.”

• Jennifer Chams, Uphams Corner: “The diversity!  Reminds me of New York but slightly less chaotic.” (Kind of cracks me up with Juanita Cox calling the driving “nuts” in the online response. – MR)

• Richard Rivera, Uphams Corner: He and his wife after buying their house in Dorchester were “overjoyed to know that our kids could grow up in a city like we did.  The best part of Dorchester is its diversity.  It was one of the deciding factors for us in choosing where we would raise our family.”