Conor Olsen and family will be hosting the Conor Crushes Cancer ‘Buzz Off’ event on Sunday, April 3, at the Devine Ice Rink in Neponset.
Olsen Family photo

Life often has a way of throwing up roadblocks in the strangest places and at the most unexpected times. It’s something that 13-year-old Conor Olsen and his parents, Deb and Phil, experienced in late February. For the past two years, they have traveled from Dorchester to Foxborough weekly for goalie skills practice, but this time was different.

“We were on our way to hockey, and we were going to Chick-Fil-A to get food and while I was waiting for the food, I fainted there in the line,” said Conor, who plays goalie for the Dorchester Youth Hockey (DYH) Bantam Blue team. “I got up and went outside to get my mom and I fainted again outside by the curb.”

The next stop, at about 6 p.m., was an Urgent Care clinic on the way to Foxborough, then on to Milton Hospital, and finally to Boston Children’s Hospital, where at about 6 o’clock the next morning, the Olsens were told that Conor had Hodgkin’s lymphoma, a cancer of the lymphatic system, and that he needed to begin treatment immediately.

“In my mind, at first, it was nothing,” said Deb Olsen, who thought her very active son was probably dehydrated. As for Conor, “It kind of caught me off guard. Once they started asking me if I had been feeling tired after hockey or if I had been tired during normal things that didn’t used to make me tired, it kind of hit me. I never knew the things that I had felt could lead to this.” 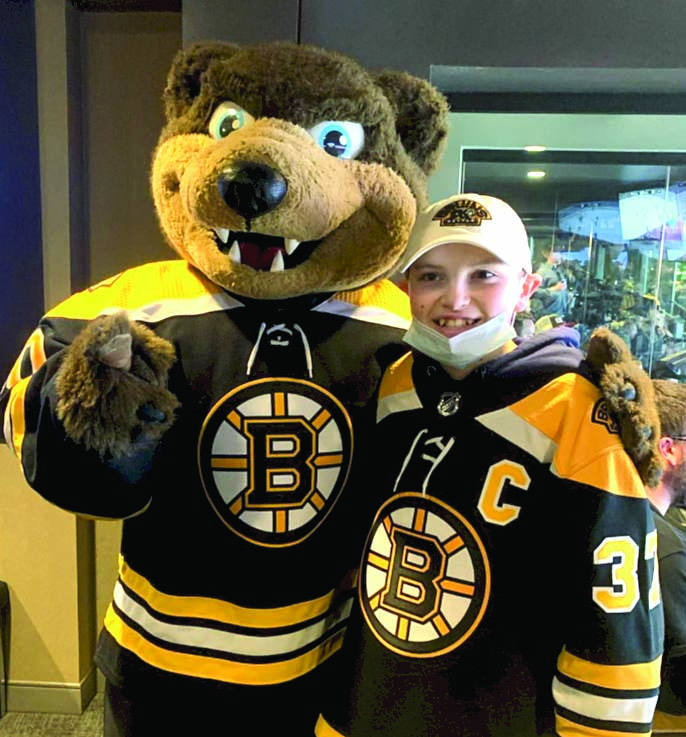 Conor Olsen and family will be hosting the Conor Crushes Cancer ‘Buzz Off’ event on Sunday, April 3, at the Devine Ice Rink in Neponset.
Olsen Family photo

His dad said Conor has entered into a trial treatment program at Children’s that includes three rounds of chemotherapy and maybe radiation. At this point, the Boston Collegiate Charter School eighth grader’s schedule calls for a visit to Children’s once a week for treatment and a check-up.

The drastic turn of events meant that Conor missed the tail end of his hockey season, including the state tournament games. He watched online as his teammates won one of their games, then he joined his mates on the bench during the state championship game against Hanover, a close game that Dorchester lost.

The season, however, didn’t stop for the team after that game. DYH families and the Bantam Blue players kids have rallied around the Olsens – a gift card and a new PS5 followed for Conor, which he is using to play the ‘MLB’ baseball game.

“We’re just very blessed,” said Phil. “We’re fortunate to have support of family and friends and people we don’t even know. It’s incredible to think you just go into a hospital and have something like this happen. Then the outpouring of support. You see it with others, but when it is focused on you, it’s just so humbling and we’re so grateful. We couldn’t live in a better part of Boston or in a better part of the country in that we have access to care at a place like Children’s.”

Once Conor’s treatments started, he began posting on his Instagram journey page (@ConorCrushesCancer), including a note that he had gone to the barber to have his hair cut off ahead of his chemotherapy treatments.

“My hockey team saw that, and they wanted to show their support for me by shaving their heads, too,” he said. “We talked about having a whole event for the community to come out to, and that’s what we’re doing.”

That gesture by his teammates has morphed into the Conor Crushes Cancer ‘Buzz Off’ event this Sunday, April 3, at Devine Rink in Neponset. Participants are encouraged to shave their heads to raise money in support of other families at Children’s that Conor sees during his Wednesday treatments.

Having already felt the support of so many, the Olsens want to bestow the same help “out of the blue” to other families also in treatment for Hodgkin’s lymphoma - help that would include things parking and food costs. The event will feature T-shirts for sale, and donations will also be accepted.

Deb Olsen said that although they had 80 spots available for the ‘Buzz Off,’ and all 80 spots were filled quickly, they expect there will be ample room for walk-ins at the event, which will take place from 10 a.m. until 2 p.m.