The BCYF Curley Community Center has been closed since March 2020. Renovations inside the 1930s era community center started in Oct. 2020 and were supposed to be complete by Nov. 2021. The project has been slowed by construction delays and dueling lawsuits between the city of Boston and contractors. Reporter photo by Bill Forry

A $23.3 million project aimed at modernizing the city of Boston’s only beachfront community center remains unfinished and inaccessible this month as city officials and their contractors tangle in court over who’s responsible for missed deadlines and cost overruns that could— by some counts— eclipse a half-million dollars.

The extensive renovations to the BCYF Curley Community Center in South Boston— known to many as the L Street bathhouse—were supposed to be largely completed in Nov. 2021, according to court records reviewed by the Reporter this week. Key wellness and social services, including programming for children and seniors, have been displaced during the extended closure, which started in March 2020 due to the Covid crisis. The center never re-opened, with city officials choosing to instead “fast-track” construction in the Depression-era facility. Work started inside the building in October 2020.

On the facility’s city-run website, the long-delayed completion and reopening is blamed simply on “unexpected structural issues and delays in receiving materials” that “pushed the targeted reopening to fall 2022.”

But court documents from Suffolk Superior Court’s Civil Division offer a far more detailed picture of an ongoing dispute over money and culpability that has been playing out behind the scenes since early 2021.

BATTLING IT OUT IN COURT

In May 2022, the Milton-based company Boston Building & Bridge Co. (BBB) that won a competitive bid to gut and rebuild the Curley Center filed a lawsuit against the city of Boston, alleging that the city was liable for a “breach of contract.” At the heart of the suit are claims that the city failed to identify and account for hazardous materials— including asbestos— that BBB says it discovered after the project began. After BBB alerted city officials to the problem, the company alleges that the city waited a year to “evaluate BBB’s claim and ultimately issue its denial” to add more time and money to deal with the problems.

“The City’s cavalier treatment of BBB’s claims is an intentional obstruction of the City’s statutory and contract requirements calculated to gain unfair leverage at a time when the Project will be significantly cash-starved,” the suit alleged.

The initial lawsuit by BBB claims that the city of Boston refused to pay for nearly $700,000 in costs associated with change orders to mitigate the hazardous materials and additional construction adjustments.

BBB’s attorneys also claimed that the City hired an outside consultant to review the problem— and then ignored that consultant’s recommendation that more time — “at least an additional 151 calendar days”— would be needed to address the problems.

The lawsuit requested a jury trial to resolve the dispute and to “recover damages from the City,” including legal fees for having to pursue the dispute in court.

ATTEMPTED RESOLUTION TURNS TO COUNTERSUIT
Initially, the two parties seemed inclined to try to resolve the matter outside of court. On June 3, 2022, they filed a joint motion to “stay” court proceedings to allow for an “in-person meeting to discuss BBB’s claims.”

But, in July, attorneys for the City of Boston filed a fresh complaint in Suffolk Superior that brought two new parties into the widening legal fight: the South Boston-based DesignLAB Architects, Inc. (dLAB) and CAN Surety, which serves as the project’s insurance agency. The city of Boston’s countersuit blames the architectural firm dLAB, which it hired to scope out and design the project back in 2018, for not highlighting the presence of “latent asbestos” (abbreviated as ACM) inside the Curley facility.

“In its testing and preparation during the preliminary stages of the Project, dLAB failed to prepare the City for the amount of ACM discovered at the Project site… To the extent the City is liable for damages in connection with the changes due to differing site conditions, dLAB bears at least a portion of the fault for failure to provide satisfactory services under its Design Contract.”

The city’s suit goes on to blame dLAB for signing off on costly change orders “each of which included changed work due to dLAB’s errors and omissions.” The suit itemizes other alleged flaws in dLAB’s plans outside of the asbestos issue, including piping, fire protection systems, and skylights. It also claims “errors and omissions” in the design plan that “entailed necessary foundation repairs to render the structure watertight.”

The city’s attorneys alleged the total cost of the architect’s errors amounted to $705,383.30.

“These failures directly harmed the City, as it is still unable to open a crucial community and beachfront amenity to the public for the second summer in a row. Moreover, upon information and belief, fall programming for the public at the site may now be threatened.”

Most recently, on Aug. 31, an attorney for an insurance company representing BBB— Western Surety Company— asked that the city’s countersuit be dismissed “with prejudice.” The original suit is still listed as “pending,” according to the Massachusetts Trial Court. 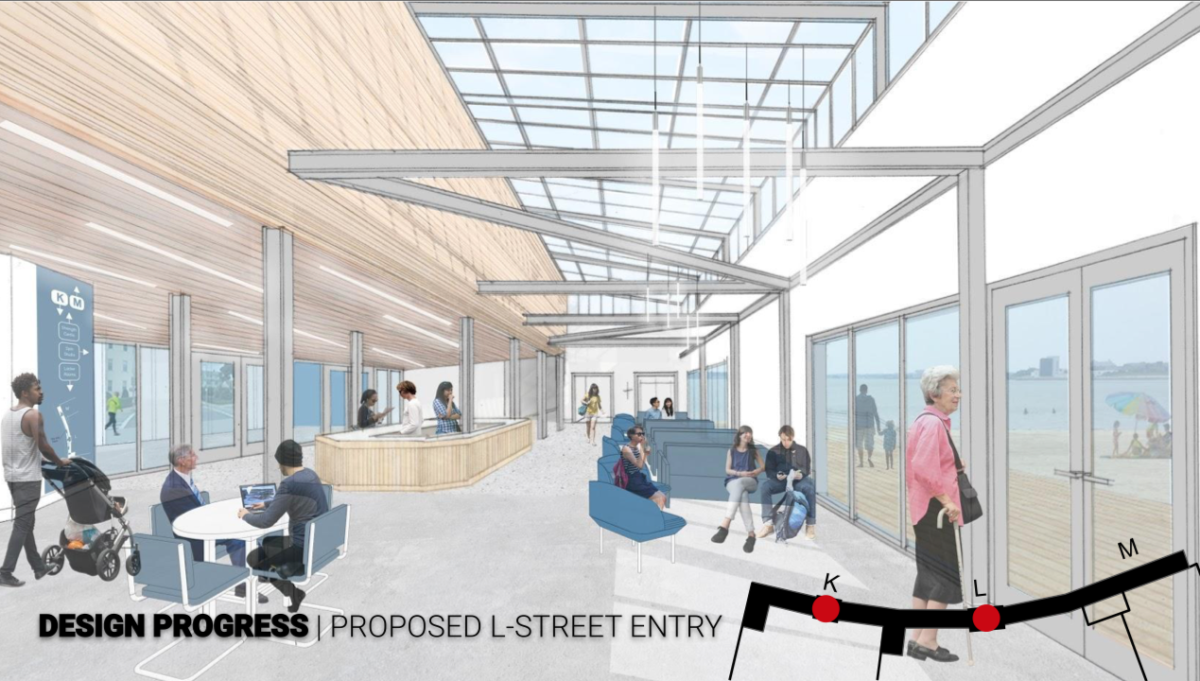 An image from a 2020 City of Boston presentation shows how one of the lobbies inside the renovated Curley Community Center is supposed to look.

'ON TRACK FOR END OF THIS YEAR'

The Reporter reached out to each of the parties for comment about the dueling lawsuit and the Curley project’s status. An attorney for BBB declined to comment citing the pending litigation. The city of Boston would not comment on the record about the lawsuits, also citing the pending nature of the case.

The city of Boston also denied requests by the Reporter to visit the Curley site to review progress and conduct one-on-one interviews with key city officials responsible for the project.

Dion Irish— the city’s Chief of Operations —offered a written statement through a spokesperson: "The City of Boston is committed to reopening the BCYF Curley Community Center safely, sustainably, and as soon as possible. While construction delays are never ideal, the City is taking action to ensure the Curley can reopen with state-of-the-art facilities, including a dance studio, fitness center, spaces for seniors and youth, and three multipurpose rooms for community events.”

“We look forward to a community center that Boston's families will be able to enjoy for generations to come,” read Irish’s statement.

This week, the center remains a fenced-off construction site. And despite the ongoing legal fight, city officials say it’s on track for completion by the end of this year.

Among the construction work still left to complete, according to a memorandum shared with the Reporter are:

• Work on all three entrances to Columbia Road, including pavers, cast concrete and landscaping;

• Exterior work along the L Street beachfront, including concrete work on handball courts, lighting and metal posts on the deck areas that face Dorchester Bay;

•Interior electrical work and wiring, and finishes to floors, millwork and painting.

Councillor-at-Large Erin Murphy, who has fielded inquiries about the long delays from constituents across Boston, said she’s going to work “alongside the Mayor’s Office, BCYF and other elected officials to ensure that the Curley Community Center’s doors are open for our residents as soon as possible.”

She added: “This neighborhood has waited long enough for the Curley to be back, and they deserve answers to what slowed down this process so much.”