Two local nonprofits, The Martin Richard Foundation and the Boys & Girls Clubs of Dorchester, have filed their joint proposal for a 75,000 square-foot family-focused facility in Columbia Point with city officials, a move that kickstarts the city’s review process for this sort of large project.

The proposed three-story building at 315 Mt. Vernon Street – to be called the Dorchester Fieldhouse – was designed by RODE Architects. The facility will comprise indoor playing fields, a walking track, fitness rooms, classrooms, a theater, and a teaching kitchen and outdoor roof garden. A public cafe, with outdoor seating, and a parking lot for 45 vehicles, are also part of the proposal.

“This facility is uniquely designed to meet the next generation of students; located intentionally to attract and impact kids most in need and programmed with elements that allow for a forward-thinking, regenerative approach to sustainability, health, wellness, and culture for all kids of all abilities,” Bill Richard, Martin Richard Foundation co-founder, said in a statement. “I am excited for the future for our kids and hopeful that this facility will be a space that propels their imagination and talent to lead our city forward.” 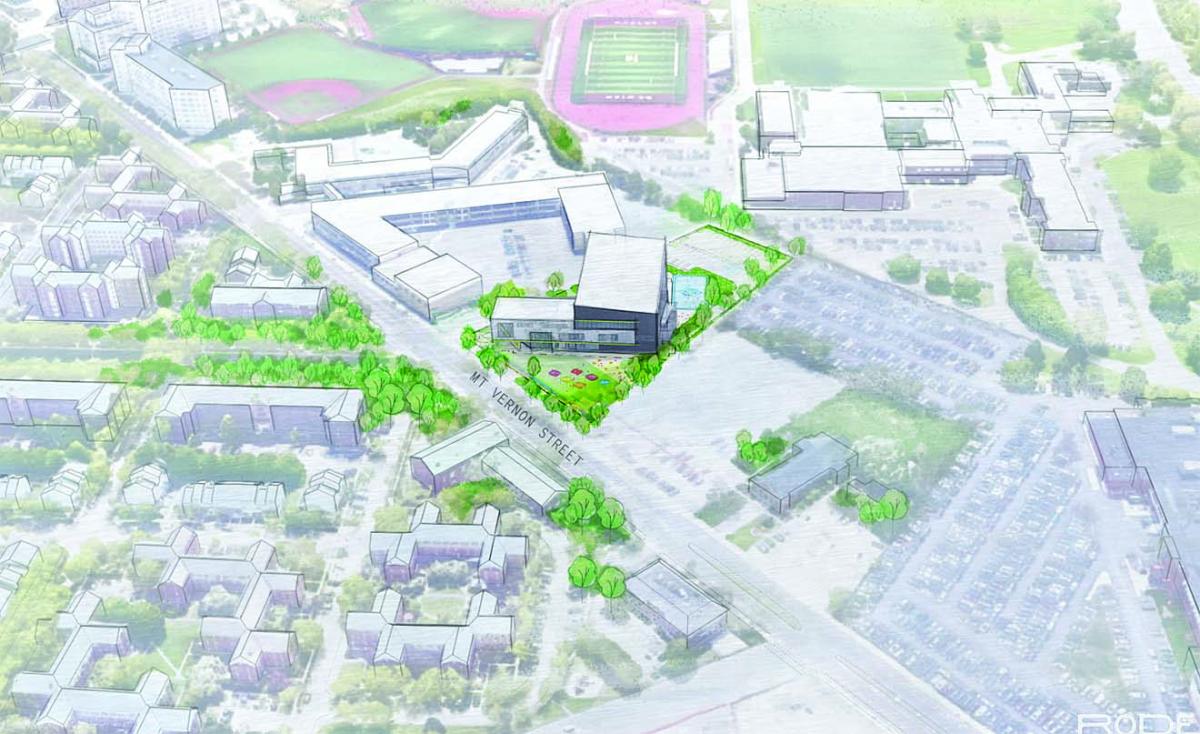 The proposed Dorchester Fieldhouse will be next to the Dever School and McCormack School, as well as Boston College High School. A rendering shows it’ll be close to a massive development known as “Dorchester Bay City.”

The project comes as Columbia Point, and the roadway that cuts through it, Mount Vernon Street, sees a surge in development. One major development, “Dorchester Bay City,” seeks to remake dozens of acres by the waterfront as part of a $5 billion effort spanning the next 20 years and including residential and office buildings, along with lab space. Separately and just south of the development, residential buildings are set to sprout between I-93 and Morrissey, close to Boston Bowl.

The proponents of the Dorchester Fieldhouse say the $50 million facility will become a “destination location” on Columbia Point. The facility is next to the McCormack Middle School and Dever Elementary School, St. Christopher’s Parish church, and close to the campuses of UMass Boston and Boston College High School. It is also across the street from a youth center operated by the Boys & Girls Clubs of Dorchester (BGCD).

“Now is the time for a significant generational investment that will be a transformational event for the city and our kids,” Bob Scannell, the president and CEO of the Boys & Girls Clubs of Dorchester said in a statement. “With newer, world-class facilities, bigger and more dynamic space, we can change more lives for the next 50 years.”

BGCD and the Martin Richard Foundation are leasing the property, a former schoolyard, from Boston Public Schools in an agreement reached last March. The property spans 109,569 square feet.

The project is set to be financed through private funds and fundraising from the Martin Richard Foundation and BGCD, with no public funds expected.

Construction could start by June 2022, and finish up by late 2023, according to the proponents’ 222-page filing with the Boston Planning and Development Agency. Lee Kennedy of Quincy is listed as the construction manager.