When the architect Chris Stanley and his family moved to Dorchester nearly 23 years ago, the Red Line was a key factor in their decision. The Ashmont MBTA station was a “pigeon barn,” he quipped, but they didn’t want to own two cars.

He recalls that in his first ten years in the neighborhood, he worked with other neighbors, city officials, and state lawmakers on upgrading and reconstructing the old public transit station, which was built in 1927. The project, with a cost pegged at $44 million, was part of a modernization of the Red Line’s Dorchester leg that was coupled with new retail space and mixed-income apartments.

Ashmont station still retains some of its shine from the upgrades, but plywood panels cover some of the windows, including one on the inbound platform, and another right by the Radford Lane entrance.

Up the to the tracks and inside the Fields Corner MBTA Station, the steps on the inbound side are patchy with gray splotches meant to repair cracks and breaks. Farther up the line, just outside Savin Hill Station, part of the sidewalk is fenced off, and cars are no longer allowed on the bridge next door, which spans the Red Line tracks and I-93.

At JFK/UMass, a major hub that also serves several bus lines and the commuter rail, the Columbia Road entrance down to the Red Line was abruptly closed on a recent Sunday night. Staircases leading to Sydney Street on the station’s southern end have been closed for months.

The Red Line train cars themselves look worn, as the line awaits an influx of new ones built by a Chinese-owned company and assembled in Springfield. Wait times on the platform can reach 20 minutes, as the T struggles with staffing levels and federal scrutiny that came after numerous safety lapses.

To be sure, the MBTA is working on improvements, as well as fixes. There are upgrades to the signal system underway, aimed at providing more frequent and reliable service. At Codman Yard, beyond Ashmont Station, the agency is spending $86 million to create additional storage to support the new Red Line cars, as well as adding snow melters for the third rail and new fencing.

"The MBTA continues to make good progress in recruiting, hiring and training," a T spokesman said in an email. "We are working to enhance subway service and hope to make some improvements soon."

For all that, when Maura Healey enters the governor’s office in January, she’ll immediately be faced with choosing a new MBTA leader and righting a public transit agency that has fallen onto the wrong side of the tracks due to a variety of reasons, including aging equipment that hasn’t been replaced fast enough.

“There are cities all over the world that in 30 years have created whole new lines and whole new systems,” Stanley said. “We’re just working with bailing wire and duct tape to keep ours running. It’s disheartening and it should be embarrassing.”

JFK/UMass Station, which in 2019 saw a derailment of a southbound Braintree train that crashed into signal structures, is particularly hobbled. On Sunday, Nov. 20, MBTA officials fenced off the Columbia Road entrance, citing an inspection that found “critical structural” issues. The latest problem with JFK/UMass came after steps by the busway were closed off for four months, and after a jogger fell to his death through a dilapidated stairway, since demolished, steps from the station and close to the commuter rail platform.

After a Reporter inquiry, the MBTA acknowledged that a recent inspection at the Savin Hill MBTA station found issues with a beam under the bridge over the tracks and I-93. With part of the sidewalk now blocked off, orange barrels line the bridge where cars once were allowed to park.

Elizabeth Doyle, the president of the Columbia Savin Hill Civic Association, said they often hear about such issues at the “last minute.” She is hoping for better communication from the future leaders at the MBTA. “The sad reality is that it took someone’s death for someone to pay attention to JFK,” she said of the various issues at the station.

Doyle has lived in Dorchester since 1997 and she recalls when the T overhauled the Savin Hill stop. “It’s crumbling again,” she said. “It leaks.” She also noted the 10,000 new housing units likely coming to Dorchester, many of them slated for developments along the Morrissey Boulevard corridor. A state commission, facing a deadline of this June, has been tasked with figuring out how that development, transportation issues, and rising sea levels threatening Dorchester’s coast tie together.

“The frustration is it’s Boomtown, in terms of development, but there doesn’t seem to be any long-term plan of what that’s going to look like,” including for the MBTA, which will have to handle all the new passengers, Doyle said.

State Rep. Dan Hunt said he recently met with MBTA officials over communications issues and saw the meeting as productive. But he acknowledged the Red Line’s poor condition from JFK/UMass to Ashmont.

“Our hope under this MBTA management and the next governor is for the complete reconstruction of all of the Ashmont spur stations,” he said. He added that the focus should be on fixing all of the MBTA’s current problems from the revenue the public transit agency has now before discussing additional influxes of cash.

“I’m much more interested in shoring up existing infrastructure than opening new stations or new lines or commuter rails stations,” he said. “We need to work on the urban core first and go from there.” 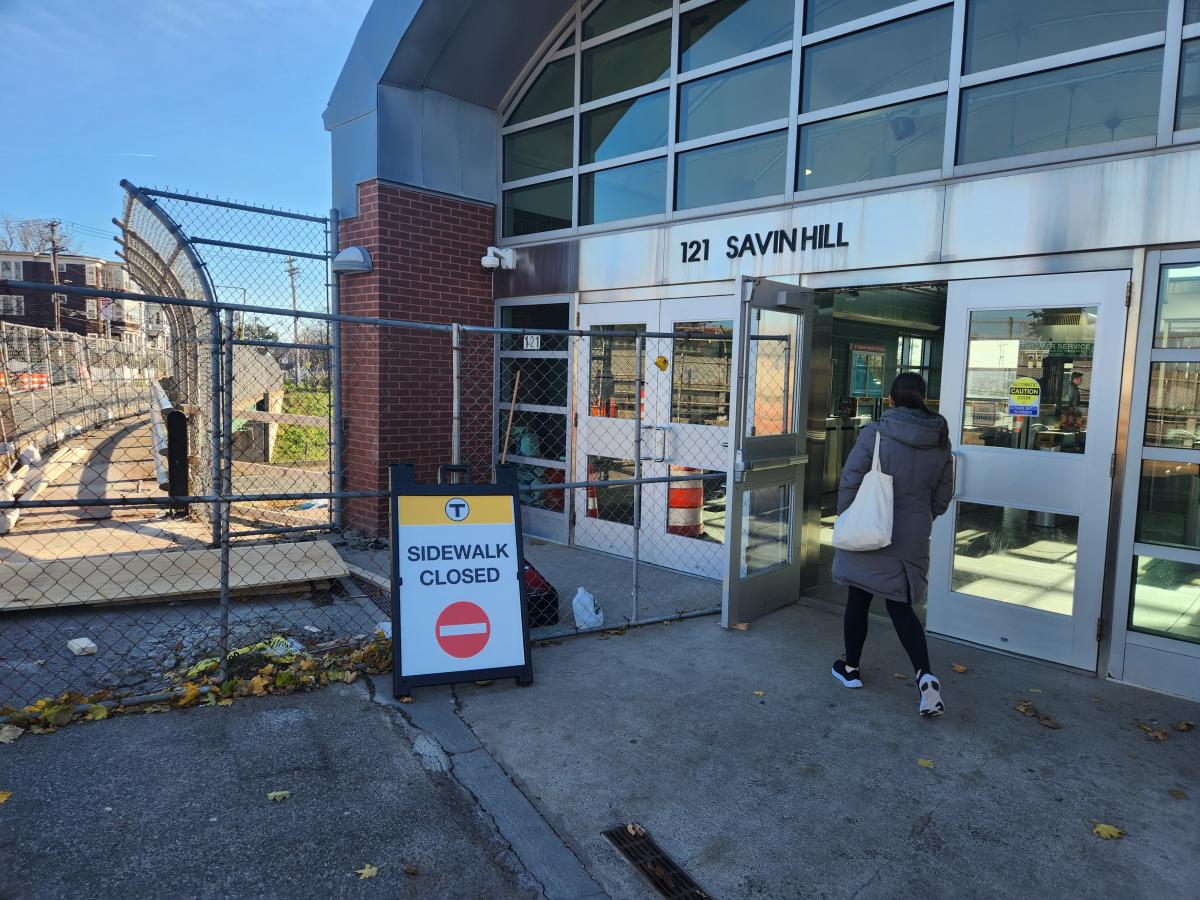 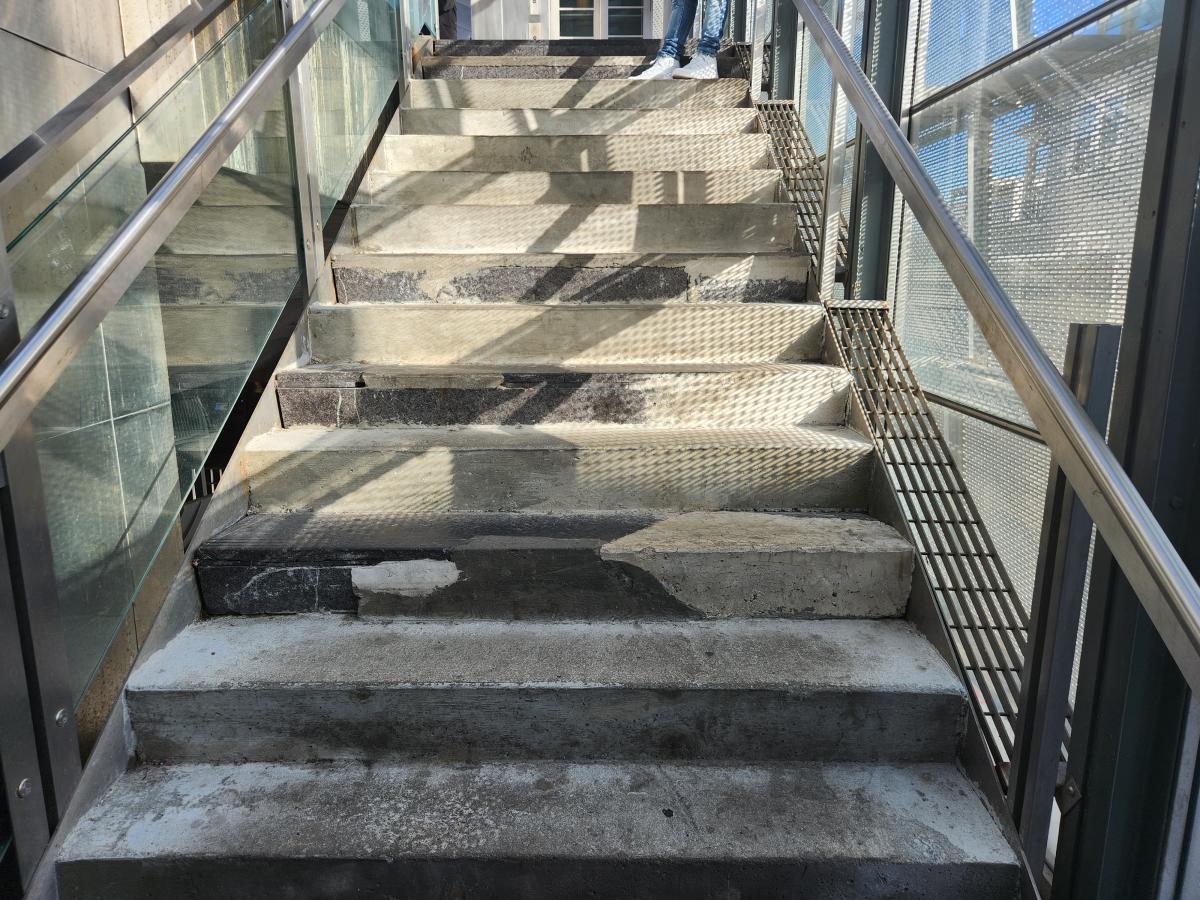 The stairs on the inbound side of Fields Corner MBTA Station. (Gintautas Dumcius photo) 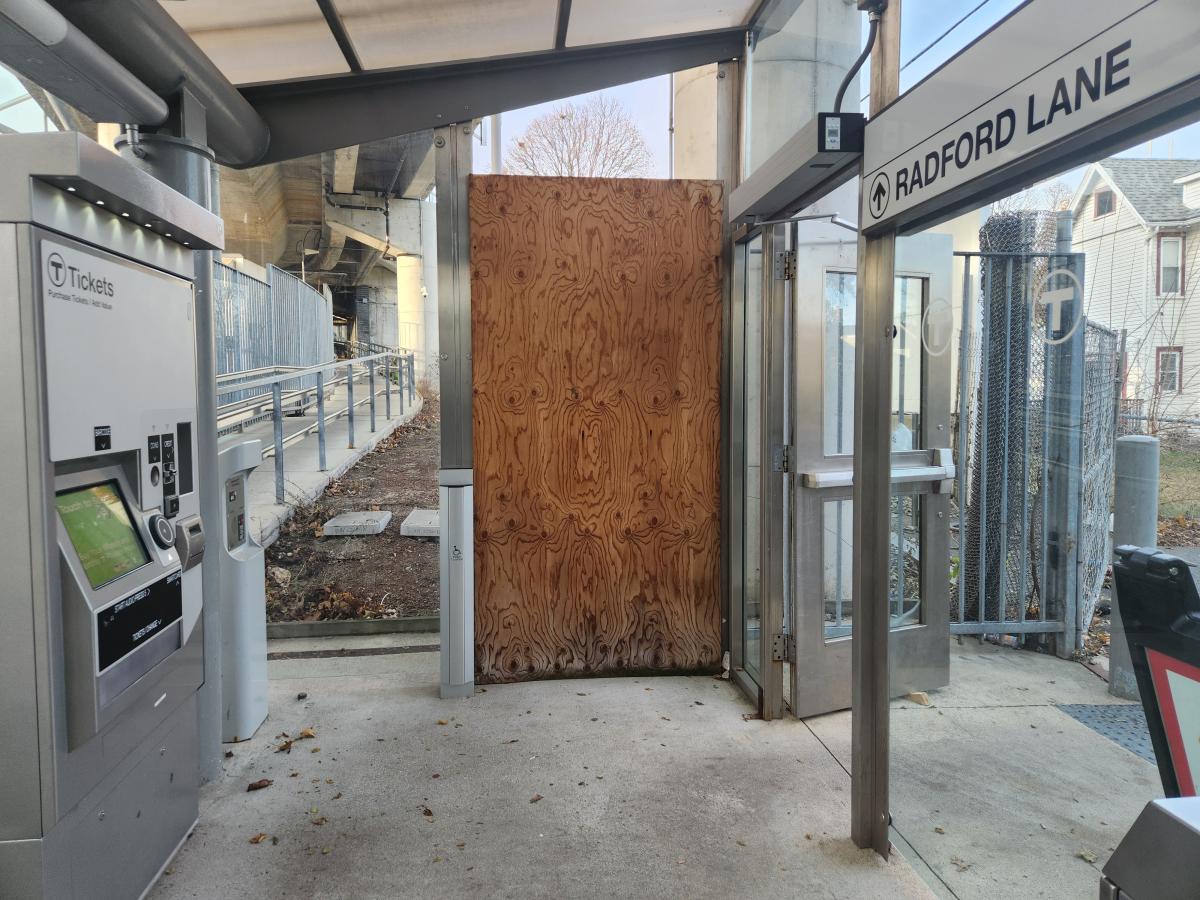 One of the plywood panels over windows at Ashmont MBTA Station. (Gintautas Dumcius photo) 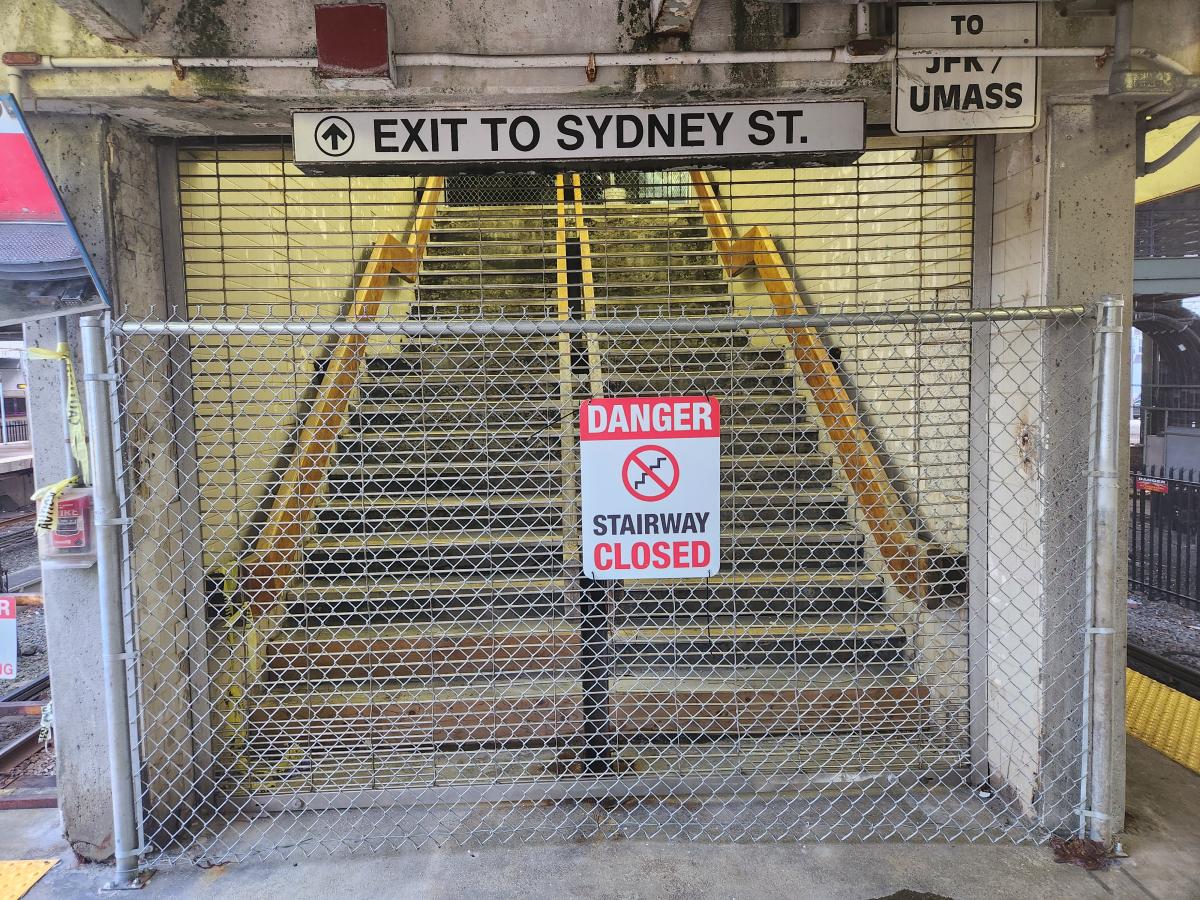 Another look at the Sydney Street exit at JFK/UMass Station, which has been closed for months. (Gintautas Dumcius photo)