This fall, the Harvard Club in Back Bay sponsored an event to celebrate 50 years of women’s competitive sports under the Title IX legislation. The occasion also involved a reunion of two pioneering female athletes and, as a result, a new collaboration to support Dorchester girls looking to play softball.

There was catching, throwing, and hitting, but creating excitement for women’s sports like softball was also on the day’s agenda.

“It was a full circle moment for me,” said Woods. “A woman who made me a better athlete was helping me again, but now to allow me to help other young females also become better athletes…I hope to be able to coach my own daughter someday here in the neighborhood.”

Woods, who is also a Boston police officer, was a budding athlete at Boston Latin School (BLS) in the 1990s when sports were not as accessible to girls. At the same time, Harvard University had just hired Allard to coach their softball team, one of just three hires for female varsity sports in the college’s history.

A softball pitching clinic at Harvard brought Woods and Allard together initially, and many years later, it was a softball clinic that has brought them together to fly the banner of female sports in the neighborhood. 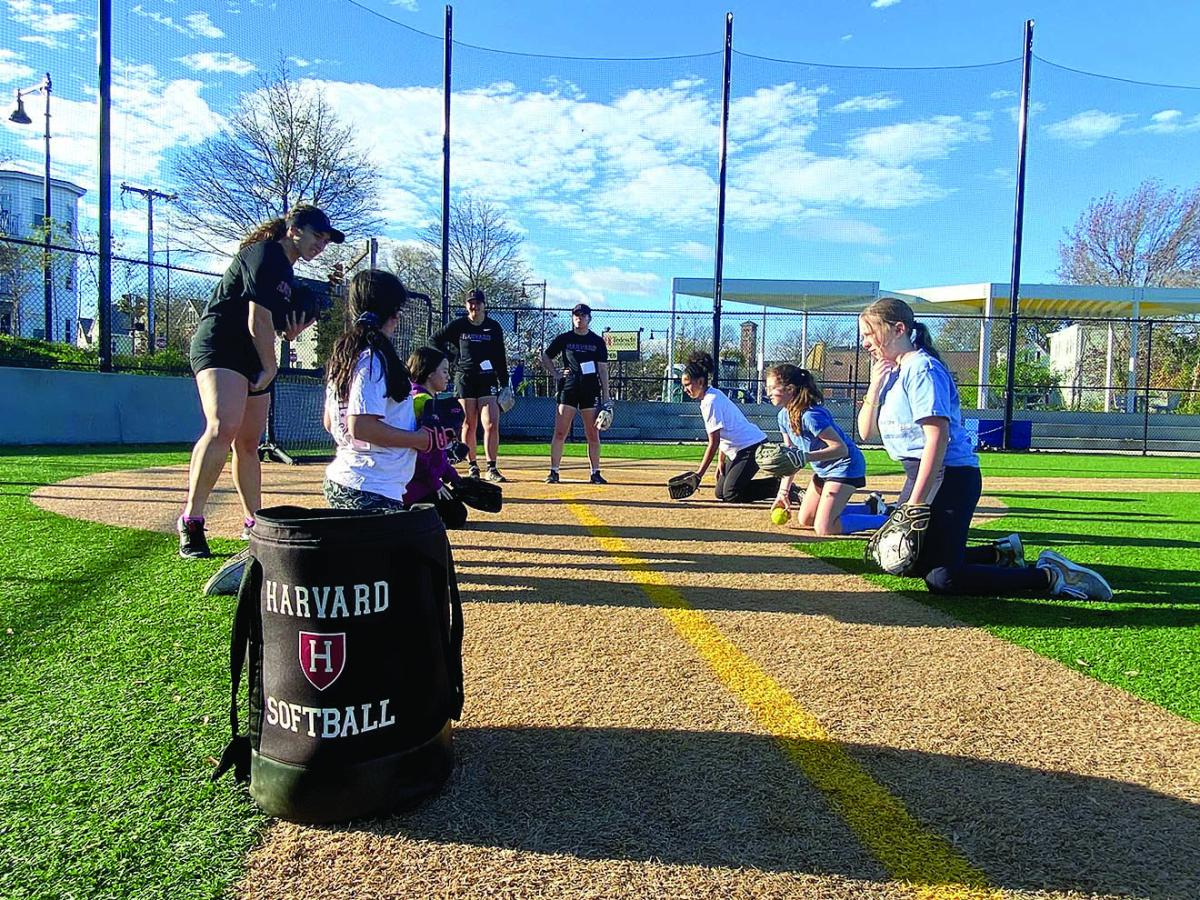 In early November, Dorchester softball players and members of the Harvard University varsity softball team participated in a clinic at Garvey Park as a first effort in what hopefully will be a long-standing partnership between the two.
Photo courtesy Boston Parks and Recreation

At the fall event at the Harvard Club, Woods had brought several girl athletes from Dorchester in her capacity as a police officer, while Allard had brought much of her varsity softball team to mark the legacy of Title IX. While there, the women discussed the 1990s clinics, with Woods remembering how she drove from Dorchester to Cambridge to hone her pitching skills.

“When I saw Coach Allard, I got pretty inspired and reminiscent at the same time,” said Woods. “Little did she know that I, the police officer who brought young girls to meet inspiring leaders like her, was also once a young aspiring softball athlete who took her pitching clinic in 1998.”

The synergy was immediate, and Allard said she and her charges were ready to hold an inaugural clinic in Dorchester in a partnership with the Boston Parks and Recreation Department.

“The goal this year was to make the connection and have our first clinic, and maybe get the girls who came to the clinic over to campus to see one of our games in the spring,” said Allard, who also wants the clinic to not only sew the softball seeds, but also to educate young girls on why they have opportunities to play sports.

Allard was born just a few years after the Title IX era began and benefitted by being in the first wave of girls to play youth sports, which led to varsity sports in high school and college.

The legislation also pushed Harvard to elevate three women’s sports to the varsity level in 1995, which is when Allard was hired full-time to coach softball.

In that vein, Allard and Woods want the girls in the neighborhood to learn why girls weren’t allowed to play sports back in the day and be able to push back when others might try to keep them out again.

“We still need to push the envelope so that when we see inequalities, we know them and address them because they still happen,” said Allard .

Jennifer Misiaszek, of Boston Parks and Recreation, said the partnership with Harvard is a winner, and something they plan to continue.

“The girls who came from Harvard really wanted to be there,” she said. “It wasn’t something the coach made them do…Softball has been dying in the city and it’s sad to see that. I hope we can get it going again and this collaboration will help. It’s amazing to have this connection with Harvard.”