South Vietnamese military police veteran Nguyen Ngon, who fought alongside American soldiers in Vietnam, and Khang Nguyen, part of the Vietnamese Community of Massachusetts, at the Memorial Day exercises on Monday in Dorchester. Seth Daniel photo

Along the rest of the parade route, applause is also common for those who know what these Vietnamese men stand for. But for the many onlookers who are unaware of their story, they can be a mystery. In fact, most of the Vietnamese men marching survived horrific treatment in prisons or re-education camps after American armed forces left Vietnam and the Viet Cong (VC) and the North Vietnam military took over the country.

Ngon, 82, carries a sense of pride and relief at having gone through awful circumstances to be able to proudly march in uniform up Dorchester Avenue.

“When I came here, it changed my life because everything in my life is so good,” he said this week in an interview. “I have been in the parade every year since I got here and that’s more than 20 years. It’s a whole new life.” 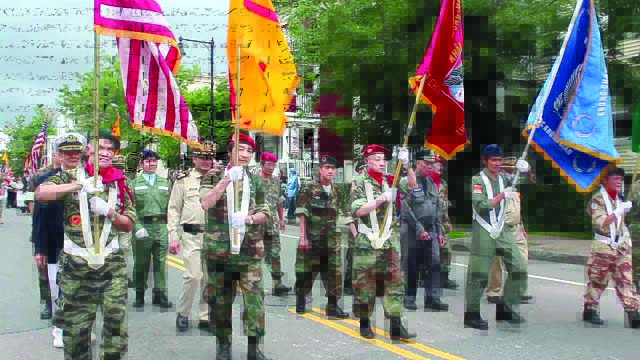 Thin, who runs Kimmy Pharmacy on Dorchester Avenue, said he shows up at the parade to let everyone know that the fight for freedom must go on, whether in Vietnam, Ukraine, or America.

“We continue to fight,” he said. “We march in the parade, and we show up at memorials. We didn’t finish the job, but we’re back together now, and the hope is that we will continue to march and fight until Vietnam is free.” Both men are part of a contingent of about 30 who march as part of a loosely organized group within the Vietnamese Community of Massachusetts organization.

Khang Nguyen is part of that organization, and though he is not a military veteran, his father served in the South Vietnamese Navy. He said there is a great deal of pride in the community about these men.

“People are proud of them, even if they lost the fight,” he said. “There is pride for a soldier who stood up and defended the country. They are very proud of that. Vietnamese here really love the American Vietnam veterans, too. They get along well…Most agree they didn’t lose the war at the battlefields. They lost the war in Washington, D.C.”

Added Ngon, “The American soldiers in Vietnam left their families here to go to Vietnam to fight with us. I feel now that it’s important to honor and to respect them.”

Ngon had been a police officer in South Vietnam since 1962 and he fought in the war with America in that role. When the country fell, he said, he suffered greatly. “I was a major in the police force,” he said through translation. “I was put in a re-education camp for 10 years and got out in 1985.

“After my release, they continued to control me. I had to go every week or every month to the local government and tell them what I had done in that time. Even though I wasn’t in prison, they still wanted to keep an eye on me and control what I was doing.”

Thin was a captain in the South Vietnamese Army, and he was also imprisoned after the war, which is why the cause of freedom is a bell that continues to toll loudly for him every day.

“They put me in a prison camp for four years for collaborating with America, which they said was the enemy of the VC,” he said. “I told them they were wrong; America was good and helped us. They told everyone I was a traitor. They tried to brainwash me, but that was impossible because freedom and democracy can never be accomplished by a dictator full of murder and lies. That wasn’t something they could force me to believe.”
Added Nguyen, “Most of those who were high ranking like lieutenants or majors were put in prison for three years. A few got 12 to 15 years. The higher the rank, the longer in prison.”

Those who march in the parade served South Vietnam as members of the Air Force, Navy, Army, and the Police Force. Almost all of them were imprisoned or put in re-education camps – then persecuted after being released. Most of the Vietnamese American community in Dorchester came as refugees in the late 1970s or 1980s under the US resettlement program for those able to get out – usually by boat or by foot.

Those who served in the military or police force, however, had been quickly rounded up after the country fell and the Americans were no longer around to protect them. They were left behind to pay a steep price, Nguyen said.

Things began to change at the behest of late US Sen. – and Vietnam War POW – John McCain in the 1980s, as well as efforts by the late Army General Colin Powell. As part of President George H.W. Bush’s efforts to normalize relations between Vietnam and the US, former military men were allowed to leave their native land under the Human Operation Program (HO). In the early ‘90s, many of them began arriving in Dorchester to start new lives in a growing Vietnamese American community near Fields Corner.

“We got to come over here from Vietnam to tell the story about the VC,” said Thin. “They don’t cherish freedom or democracy in their government. They would not allow us freedom there, so we get to come here and be free.”

Ngon arrived in 1990 and heard about the parade soon after. In 1991, he put on his uniform again and began marching. This Sunday will be no different. And with the parade returning after a two-year Covid hiatus, some 20 of his fellow veterans will join him on the route in uniform, proudly entering Fields Corner and other enclaves to applause, particularly from those who understand the horrors the men endured simply to don the uniform and walk tall and freely in their adopted community.