Responding to a request for proposals issued by the Boston Planning and Development Agency (BPDA) earlier this year, two teams vying to redevelop a city-owned block in Uphams Corner presented differing visions to the community during a virtual public meeting earlier this month. Both, however, include space for a new Uphams Corner branch library next to the existing Strand Theatre. And both, along with the BPDA, had timelines to finish construction at some point in 2025.

A pre-requisite set by the city for proposals was that developers provide space for a ground-floor branch library, which the city would later build out to Boston Public Library specifications.

One of the proposals for the property, which includes the former Bank of America building and the adjacent parking lot at 555-559 Columbia Rd., was advanced by Civico Development in a partnership with the DREAM Collaborative. The second offering, dubbed “Columbia Lofts,” is a partnership of The Caritas Project, in collaboration with NHP Foundation.

Civico-DREAM proposes a homeownership development that preserves the facade of the old bank building as the entrance to the library. The plan includes housing, but not commercial space, and provides room for parking.
Rendering courtesy of Civico.

The public review of the two proposals is the latest step in a years-long process to make Uphams Corner an Arts and Innovation District anchored by The Strand Theatre and other existing institutions. Natalie Deduck of the BPDA said the development of the targeted property would be “part of a vision for a new hub of creative activity” in the city.

The Civico-DREAM proposal has emerged as the early favorite based on comments made by residents at the meeting. Their proposal was unique in being a homeownership development that preserves the facade of the old bank building as the entrance to the library. The plan includes housing, but not commercial space, yet provides generous room for parking.

“The thrust of the project really focuses on homeownership,” said Taylor Bearden of Civico during the meeting. "This is in contrast to most of the developments in the neighborhood that are mostly focused on rental.” 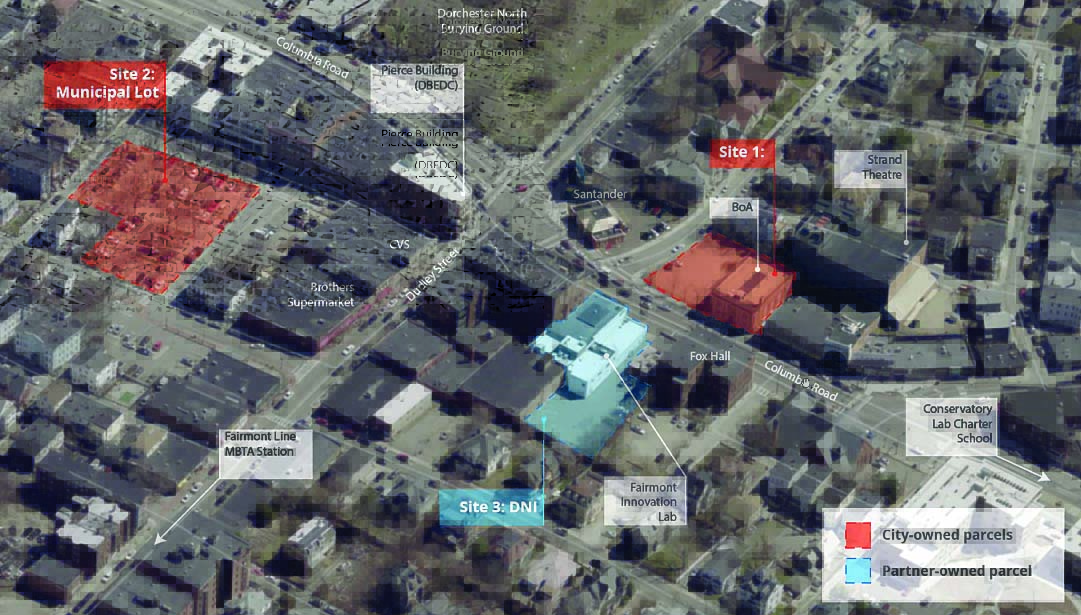 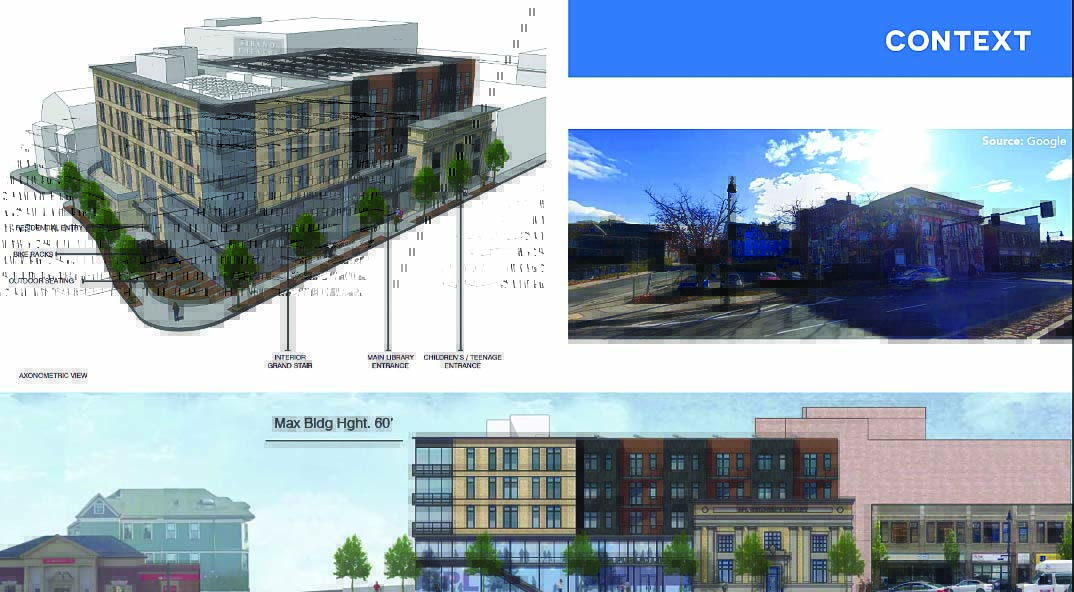 The Columbia Lofts proposal includes a wide range of supportive, affordable rental housing with artist lofts, entrepreneur-in-residence living spaces, maker spaces, retail space, supportive services, and other amenities. The plan doesn’t contain any parking on site; the Caritas-NHP team said it had crafted the proposal to be a development where people would live and work and rely on existing public transit.

“Caritas Communities and the NHP Foundation look forward to continuing this important conversation with the residents of Dorchester,” said Caritas’s Gregg Rittchen. “We are proud of our innovative vision of a thriving, mixed-use, mixed-income project that has the potential to be a centerpiece in the nucleus of the community.”

The Civico-DREAM bid includes 33 units of workforce housing (1-3 bedrooms) between 70 and 100 percent of the AMI in a homeownership format, where a three-bedroom at 80 percent AMI would cost approximately $290,000. There would be 39 parking spaces and a 1,500 square-foot community space yet to be programmed.

“There is a lot to like in this project from my perspective,” said Mardi Glynn, who lives nearby. “I like homeownership a lot…I would like to see people of all income levels living in a building together.”

Another neighbor, Catherine Walker, wrote: “I appreciate the preservation of the former bank building facade, and the parking provision is important.”

Joan Tighe, a member of the Uphams Working Advisory Group (WAG), said the community space needs to be larger, and suggested that Civico coordinate with long-time organizations like the Fairmount Innovation Lab – which needs space.

The $22 million Caritas proposal envisions 72 units of affordable housing in one-bedroom and studio rentals at levels from 30 percent AMI to 100 percent AMI – with the bulk of the units below 50 percent.

The lack of parking in that proposal was a key issue for many neighbors. “It’s too much for the area,” said Willie Pleasants. “People will have cars. I don’t care what you say, everybody in those 72 units are not going to only use the bus. It’s too congested.”

Allida Warn of WAG and the Conservatory Lab Charter School was curious about the type of supportive housing being proposed. “There’s a difference between having a halfway house down the street from my school and having a really cool development for all people with a creative focus,” she said.

Caritas team members said they are confident that parking won’t be an issue. “The notion is we have so much public transit around in such a short distance and we’re going to lean on that,” said Gary Kane of The Architectural Team.

Mecky Adnani, of NHP, noted that the proposal wasn’t about family units, but for adults who would hopefully live and work in the building.

“They’re really meant for individuals that live and work at this building,” she said. “I want to clarify that. We consider it a site with transportation access…It’s all in one place and we thought that was the best approach…”

Added Rittchen: “There are folks already living in this neighborhood and we’re trying to give them what they need in new space, business space, and housing space.”

Pleasants called on both developers, Civico and Caritas, to consider the library as a focal point and not to push it to the background.

“We’ve been waiting a long time for our library, and we don’t want it to be a sidebar to the innovation down the street that is coming to take over,” she said.

The BPDA’s Deduck said the agency is planning to hold a second meeting with both development teams, and it will be an in-person session in Uphams Corner – one of the neighborhood’s first in-person meetings since early 2020.

The comment period on the proposals remains open, and comments are questions can be directed to Deduck at natalie.deduck@boston.gov.