The cover of the sixth volume of Write on the Dot features a familiar neighborhood scene.

Write on the Dot recently marked ten years in operation with the publication of its sixth book of local writing and artwork.

Founded in 2011 by former UMass Boston student Aaron Devine and his classmates, Write on the Dot is a local community reading series and literary platform coordinated by the university’s Master of Fine Arts students, with input from a local advisory board. 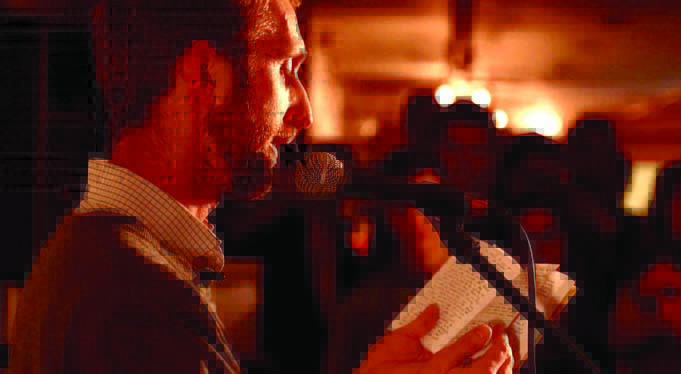 Aaron Devine, a Dorchester-based and writer, launched the Write on the Dot project in 2011 while a student at UMass Boston.
Photo courtesy Aaron Devine

For the past six years, the program has published an annual book of local writing. According to Devine, who is now the platform’s adviser and a Dorchester-based poet and writer, this year’s edition contains the most pieces to date.

“Year by year, we’ve built more and more of community, which was the whole purpose of the series,” Devine said. “In early books, we had a smaller number of pieces we were able to bring together, but this year we got the most pieces we’ve ever gotten. The book is about twice the size of the first book — over 100 pages.”

As well as featuring a substantial number of local submissions, the sixth edition of Write on the Dot highlights the diversity of the Dorchester writing scene.

“You’ve got writers who are published authors and writers who are in the Masters of Creative Writing program at UMass Boston, but you’ve also got neighbors who’ve either got a writing practice in their own respects or who are writing and publishing for the first time,” Devine said.

“We create this neighborhood of stories where all these voices can be included. I love reading the bio section because the bios speak to the diversity of the neighborhood, the genre, and the levels of writing experience. I call this a multi-generational, multi-lingual, multi-genre collection, and it shows. That’s rare.”

For his own submissions, Devine chose “Excerpts from the Thag Journals,” two poems inspired by the pandemic. The first was written during the first weeks of lockdown in 2020. The second was written exactly a year later.

When talking about his poems’ caveman themes, Devine said, “Throughout the pandemic, I was thinking about ways to use humor to recognize and lighten the load of everyone’s grief. Using humor in that way was part of the goal.”

He noted that many of the pieces in this year’s edition of Write on the Dot included themes of grief, making it both a “testament to creative endurance,” and a physical reminder of the time. Noting that writing helped him process the pandemic, Devine said, “I would encourage anyone to take up these tools. If I have any hope for this project, it’s to encourage others to write.” (Full disclosure: This reporter had a short piece published in the latest Write on the Dot edition.)

U-Meleni Mhlaba-Adebo, a celebrated local poet and educator who joined the advisory board three years ago, citing its commitment to expanding access to creative writing and publishing.

“I’m very passionate about poetry and accessibility of poetry, and making sure that people experience it and feel comfortable enough to write it, and don’t feel like they need to be credentialed to write it,” Mhlaba-Adebo said. “They don’t need to go to school. They don’t need to be formally trained. That’s why Write on the Dot was such a great opportunity and continues to be a space where I collide with incredible poets in the Dorchester community, some of whom are also board members, but also just getting to know the breadth of creativity.

In particular, Mhlaba-Adebo was struck by the line, “Boston hoards its history/like fine china,” in Durane West’s poem “617.”

“I really love that, and I think it spoke to the way in which Boston doesn’t share or acknowledge a lot of its history, and how we as poets and writers and artists can elevate those stories and bring them to life,” Mhlaba-Adebo said.

For her submission to the anthology, Mhlaba-Adebo chose “Forest Medicine,” a poem inspired by her love of trees and a visit to her home country of Zimbabwe with her mother.

The youngest writer in this year’s edition of Write on the Dot was Mhlaba-Adebo’s 10-year-old son Jabulani Adebo, who submitted “Leaves” and “The Questions.”

“He was really quite excited by it,” Mhlaba-Adebo said. “I wanted him to feel empowered to do it on his own. He was like, ‘Okay, fine mom, I’ll do it. I think I want to share my work with other people.’ I want to make sure I encourage him to do that.”

Binx R. Perino, a Dorchester resident and MFA student at Emerson College, submitted two poems. The first, “February 16, 2021: On the Phone With My Sister, A Climate Crisis Between Us,” used the relationship between the poet and their sister to explore the implications of climate change. The second, “Down King’s Beach,” invoked local scenery to discuss a breakup.

“The body of my work is autobiographical pieces,” Perino said.

“I got plugged in to Write on the Dot because I was looking for the literary scene in Boston, and I stumbled upon them over at UMass Boston,” Perino said. “I think it’s cool that they’re bringing the community together, and I wanted to be part of it. I wanted to be part of people sharing their stories and connecting to each other, because I think it’s a cool project. Throughout the whole book, there were social justice issues. It was cool to see what everyone in this community is concerned with, and how those voices are coming together.”

The sixth edition of Write on the Dot is available at all Dorchester branches of the Boston Public Library as well as for purchase online at writeonthedot.com/write-local/. Liz Blake of the Fields Corner Branch Library plans to host a virtual reading from the book this spring.