One Way Development is one of several minority-owned companies in the city using the city-owned lot process to get a bigger foot into the industry and grow their companies. Pictured, from left: Michael Boyce, Sean Miller, Sumul Shah, President Abraham Gonzalez, Vice President Alexandro Gonzalez, and Alicia Bustamante.

The rehabilitation of 150 abandoned and unkempt lots that have sustained blight throughout sections of the city over the last 40 years – Dorchester and Mattapan are home to about 70 of them – will soon provide profitable opportunities for develop-ers like Abraham Gonzalez’s Newmarket-based company, One Way Development, and, if plans are successful, also provide a way to reduce the displacement of low-income and working-class families in affected neighborhoods.

Gonzalez and his team were featured at a press conference called by Mayor Wu and other elected officials on Violet Street in Mattapan last Friday to announce the plans to develop the lots. 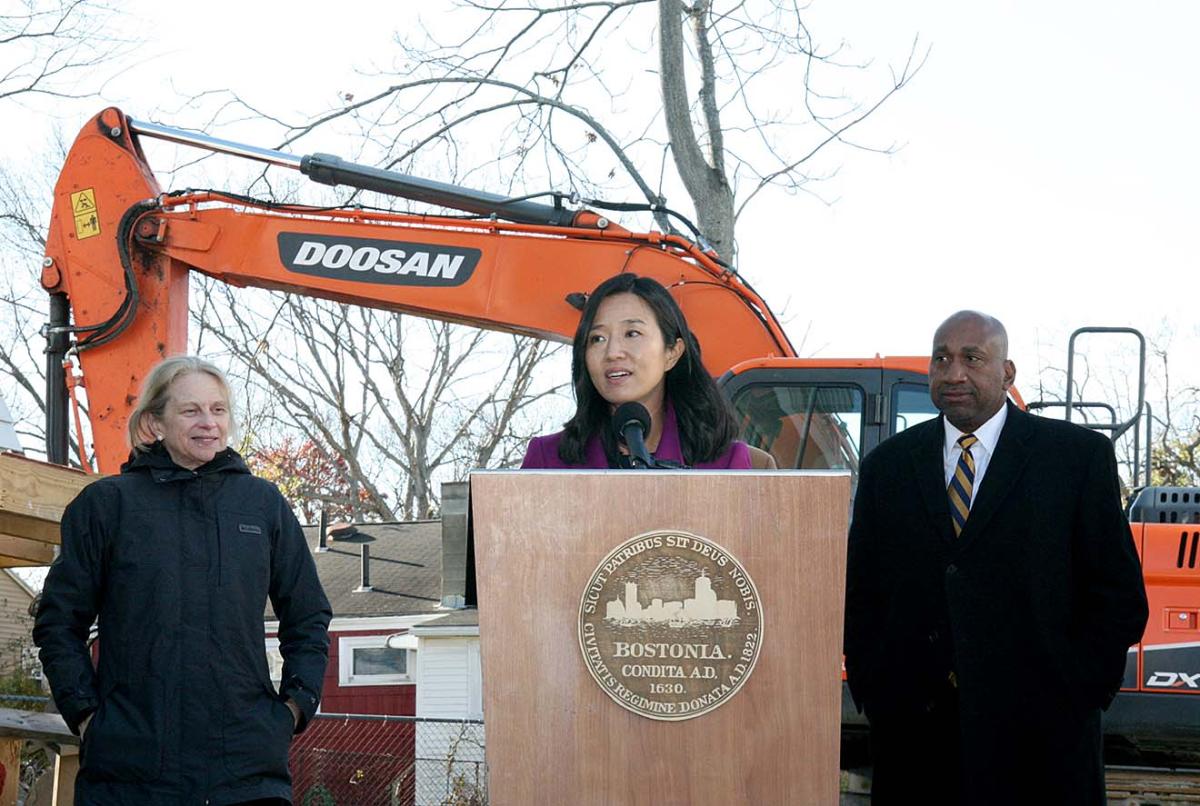 In Mattapan on Friday, Mayor Wu announced that the city will use $60 million in federal ARPA funding to move approximately 150 vacant, city-owned lots into homeownership opportunities.
Seth Daniel photos

“This neighborhood has two of the ten lots we’re developing,” said Gonzalez last Friday, with a new two-family home near occupancy rising in the background. “I think this is a great idea and it’s a steppingstone for a company like mine to get a bigger hold into building and developing in the community. The program has put me in front of a lot of other companies. I also have brought in sub-contractors to help that usually don’t get so much of this kind of business. So, it helped their companies, too.”

Standing in the shadows of a new home at 63 Violet St., Wu told the large crowd gathered that that home is just one example of what’s on the way, and that the city plans to use $60 million of its federal funding from the American Rescue Plan Act (ARPA) to stimulate many more developments on city-owned property by allowing developers to build income-restricted homeownership opportunities and providing grants to income-eligible first-time homebuyers that will deliver lower mortgage interest rates and up to $50,000 in direct assistance, including down payment and closing cost assistance.

“Many cities are still trying to figure out what to do with their federal dollars,” said Wu. “There’s so much it could go toward and it’s a once in a generation opportunity. Most are using it just to keep the lights on or to pay the bills. We have been fortunate here in Boston. Our ARPA dollars are already deployed and allocated and we’re putting them to work here. A large majority of our federal dollars have gone to housing to get market rate units off the market and to preserve and build affordable housing.”

Added state Rep. Russell Holmes: “The question is what are we going to do with all that money…All these lots are long-time eyesores in our neighborhoods…We have the money; let’s build it now.”

City Planning Chief Arthur Jemison said the challenge will be getting the lots through red tape processes and into the hands of the right developers.

“The homework we have now is to be able to do this faster – to do it in 120 days,” he said. “If we’re going to meet these goals and develop with ARPA dollars…our homework is shortening the time…A site like this not developed with affordable homeownership is an opportunity squandered.”

Funding will also be used to launch a homeownership program for qualified Boston Housing Authority (BHA) residents, with BHA Director Kate Bennett, who noted that the agency has residents who are ready homebuyers. “For every family in BHA that moves into homeownership,” she said, “that frees up a unit that can be delivered to another family on our waiting list.”

Distributing the lots to what Jemison calls “the right developers” favors companies like One Way Development, who go through a process to become certified by the city as minority-owned contractors. Using requests for proposals (RFP), lots are awarded after community involvement, which is what played out on Violet Street before construction began this year.

The program builds on initial efforts by former City Councillor Andrea Campbell, now the state’s attorney general-elect, who worked with Tufts University to identify many of the vacant lots in District 4 several years ago. Her goal was to get the underutilized city lots into the hands of developers in the community who could provide affordable and workforce housing.