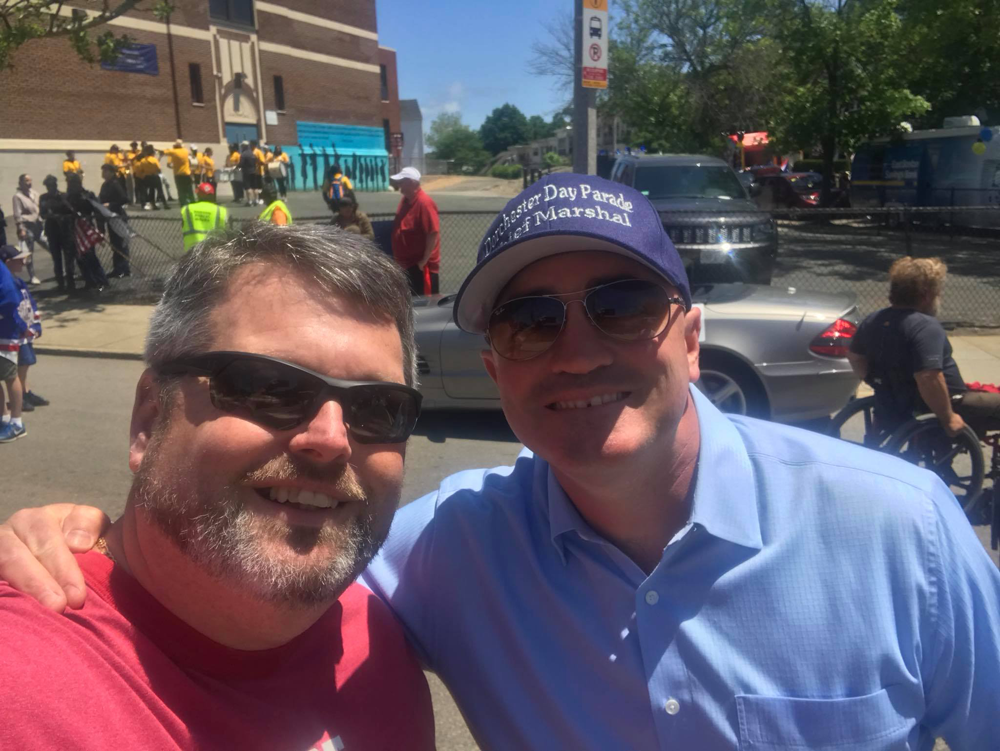 Sunday’s Dot Day Parade would have been a much less joyous affair without Chris “Tiger” Stockbridge cheering on his neighbors from the wall at Dorchester Park.

The 45-year-old city code enforcement officer — a well known and liked presence in his native Lower Mills, at his home near Adams Corner, and all over the city— found his way to his favorite perch decked out in his bright red “Dot Rat” t-shirt from College Hype.

We are all very lucky that we weren’t lined up at O’Connor’s in Adams Corner instead of watching the parade pass us by on Dot Ave.

Last Thursday, Tiger was riding his motorcycle along Morrissey Boulevard when, he says, a car drifted into his lane and clipped his mirror.

Stockbridge’s Harley Davidson rammed into the back of a car at about 30 mph. Tiger took flight over the handlebars and went crashing head-first into – and through – the rear window of the car.

The impact knocked him out and ruined his helmet. He sustained a concussion and some nasty bruises and mild lacerations to his arms. Shaken up? You bet.

Tiger was transported to the emergency room at Boston Medical Center where he spent the next two days getting the kind of care that keeps Bostonians above ground and walking around.

When I talked to my old St. Gregory’s Grammar School classmate later that evening, he was rattled and sore, but already talking about how he wanted to get his motorcycle back on the road. (His wife Kristen might have something to say about that.)

After he was discharged, Tiger posted a photo of the scratched-up helmet that no doubt saved him from a far-worse fate. “If I can tell you one thing I learned through my accident is that helmets save lives,” he wrote. “My head went through the rear windshield at about 30 mph and I escaped without a mark on my head or face because of my helmet and shield! These bruises on my arm may show how the rest of my body looks but they will soon heal.

“Again I’m one lucky guy! So if you ride and think you don’t need a helmet, look again at the difference between my arm and my head!” Tiger urged.

He also saluted the men and women who cared for him at the scene on Morrissey— and at BMC. So say we all: It wouldn’t have been Dorchester Day without Tiger.

Each year, the Dorchester Day Parade goes off without a hitch. Or, at least, that’s how it appears to those of us who are fortunate enough to enjoy it from the sidewalks. There’s a ton of effort that goes into staging this event each year— and the men and women who put their volunteer time in to make it possible deserve our praise.

The Dorchester Day Parade is a great reflection of who we are as a community— and it will only get better with more hands on deck. Planning efforts for next year started as soon as the last street-sweeper cleared the corner of Dot and Columbia on Sunday afternoon. Everyone is welcome to join in on the fun for next year.