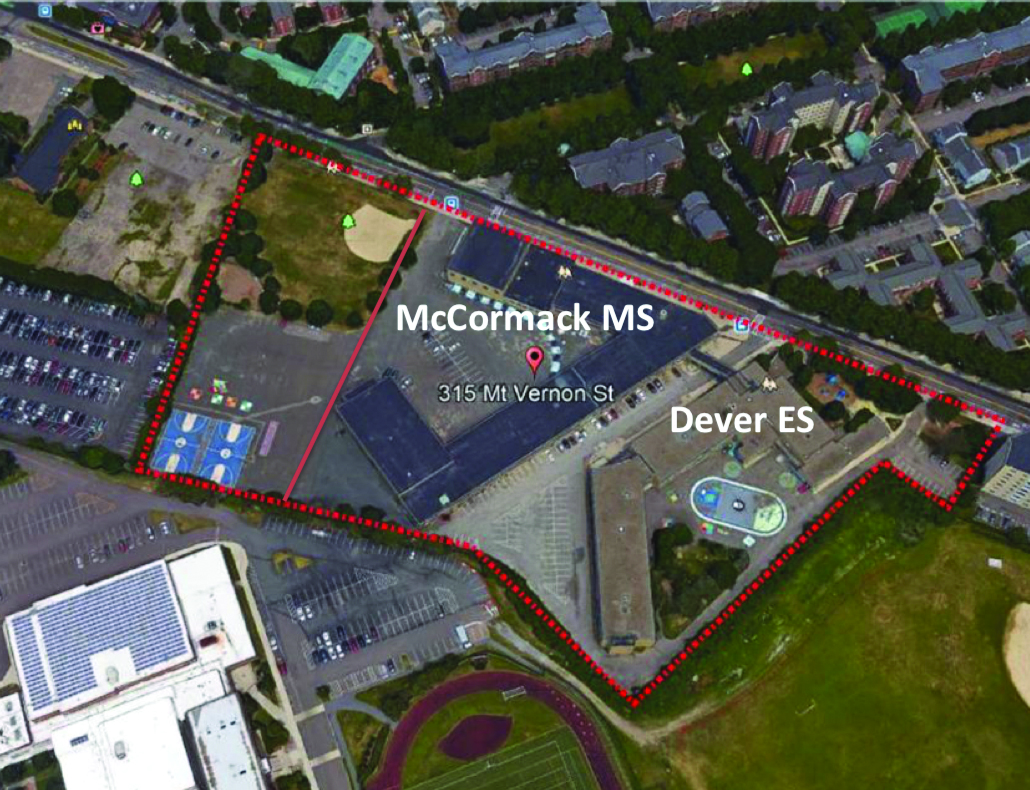 Now that UMass has picked a private partner to redevelop the 20-acre Bayside site, be on the lookout for more land-use news on the Columbia Point peninsula in the coming months.

One of the first puzzle pieces that will likely come into focus this year is a large chunk of the McCormack School property along Mt. Vernon Street. In a vote taken last May, the Boston School Committee authorized BPS to begin a process that could ultimately lead to the city leasing out or selling about 40 percent of the McCormack site to a private partner for re-use.

Unlike the UMass-Bayside deal, however, which sought to capitalize on the molten-hot real estate market to solve the Boston campus’s financial woes, the BPS concept here is to find a private partner to improve an underused tract of land specifically for the benefit of the schoolkids and the local community.

The central target is a playing field that sits between the McCormack School building and St. Christopher’s church, a property owned by the archdiocese of Boston. The land in question — about 40 percent of the McCormack site— is roughly 112,844 square feet in size, according to a BPS estimate.

Currently, this portion of the school property lies fallow for much of the year, particularly in cold-weather months. It could be ideal for an indoor sports facility to be used by Dever-McCormack and other Boston Public Schools for a variety of things.

Rob Consalvo, the chief of staff for BPS, explains: “We really feel there’s an opportunity to put out a Request for Proposals to see what appetite there is among private entities for a public athletic facility solely for the use of BPS and the community.”

On Tuesday evening, the Dever School Parent Council was the latest group to get a briefing on the idea. Othestakeholder groups, including Columbia-Savin Hill Civic, have already been briefed on the idea. Consalvo tells the Reporter that the RFP document will be finalized in the aftermath of the Dever meeting this week. A resolution approved by the School Committee last year made it clear that if “no advantageous proposal is received, the Land will remain in the case, custody, and management of the BPS.”

If there is a proposal that comes in and meets with the BPS concept, Consalvo said, the School Committee would have to agree to subdivide the existing McCormack School property to carve out the necessary land.

“Normally, this would be an expense in the capital budget, but we think there’s an opportunity to partner with an outside private entity to build some sort of athletic facility,” he said.

The McCormack site is just one of many on the peninsula that is likely to be propelled into renewed motion by the Bayside breakthrough. Other parcels to watch include the Boston Teachers Union, which sits directly adjacent to the Bayside parcels; the large Santander Bank complex, which has been sold to Beacon Capital, a real estate development company; and St. Christopher’s, the Catholic parish church, which archdiocesan officials have said could be re-purposed for student housing.