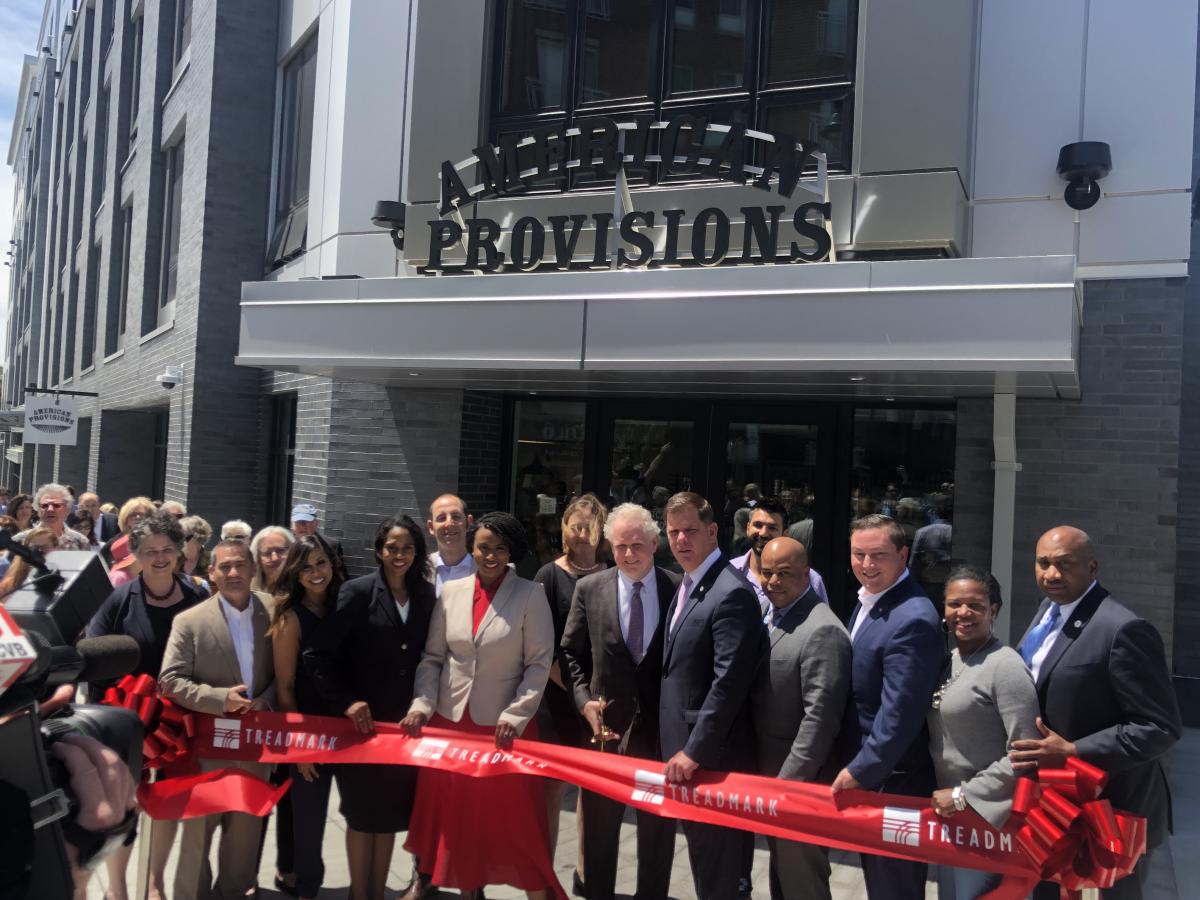 About 200 people gathered in and around a tent last Friday across from the Treadmark building on Dot Ave. to officially dedicate a building that has come to symbolize many things about our resilient and often misunderstood neighborhood. In fact, while the day was ostensibly about the six-story building, it was really a love-fest that centered on the remarkable changes— mainly for the better— that have transformed this corner of Dorchester over the last 20 years.

Mayor Walsh traced the progress back to 1997, when then-Massachusetts House Speaker Tom Finneran told Walsh— then a state rep— that he was going to push ahead about $70 million in state funds to fix Dorchester’s decrepit Red Line stations. Ashmont would eventually be one of the stations re-done over the next decade— an upgrade that gave rise to the Carruth project next door.

That mixed-use building, dedicated in 2006, stands as a monument to so-called “Transit Oriented Development.” Planned and executed by a team of locally rooted developers from Trinity Financial, Inc., the Carruth’s success as a mixed-income, vibrant center in Peabody Square is the inspiration for Treadmark.

Jim Keefe, the president of Trinity who lives on nearby Ashmont Hill, negotiated the acquisition of the old Ashmont Tire property. Keefe’s team of planners then engaged the surrounding community in mapping out plans for a new building that would create housing and retail with a keen eye toward improving the streetscape and offering 83 affordable homes without displacement.

The June 2017 fire that destroyed the first Treadmark was— obviously— a frequent topic at Friday’s dedication.

“In many ways I feel like this building should be renamed the Phoenix because it did rise from the ashes,” said Congresswoman Ayanna Pressley, who at the time of the fire was a resident at the Carruth. She took pains to thank the Boston Fire Department for their work in containing the fire and calming fears, even as she and her neighbors had to be evacuated due to the billowing smoke. The firefighters, she said, even took time to console her cat, who was frightened.

“ I just want to thank the Boston Fire Department for at a moment of great anxiety and fear assuaging those anxieties and those fears and putting themselves in harm’s way. And then the Dorchester community, liked it always does, rallied and came together, working to provide food and water. This is just what we do in Dorchester.”

Keefe was emotional as he talked about that awful day. He was at his firm’s downtown offices when word arrived that there was a problem. He had no idea just how bad it was. “I heard two fire engines coming down Franklin Street and I said, ‘Dear God, please don’t be going to Treadmark.’ But they were. They were doing 70 miles an hour down the Southeast Expressway and I was right behind them,” Keefe recalled. In the haze of that afternoon and evening, he recalled how neighbors were traumatized by the helicopters that hovered for the next day over the scene. But he also spoke movingly about the outpouring of support that he personally experienced in the days and weeks that followed.

“There’s always something good that comes out of these. The tremendous outpouring of love, thoughtful notes, emails, people showing up at my door, people leaving things on the front porch. From so many people, from so many places. You know, we have these gifts and unfortunately it can take something like this to get you to truly appreciate it. And I’ll tell you that it was a sad experience, but it reminded me—and not for the first time in my life— what a blessing it is, to have such great friends.”

After the event, neighbors adjourned across the street to enjoy lunch and refreshments provided by American Provisions, the excellent store that occupies a corner of the Treadmark’s first level. Jim Keefe and his Trinity team beamed as, one by one, neighbors extended their gratitude for Trinity’s cooperative approach and perseverance in the face of a colossal setback. The payoff for Keefe and company is a building that is— for now at least— the most magnificent on the avenue.