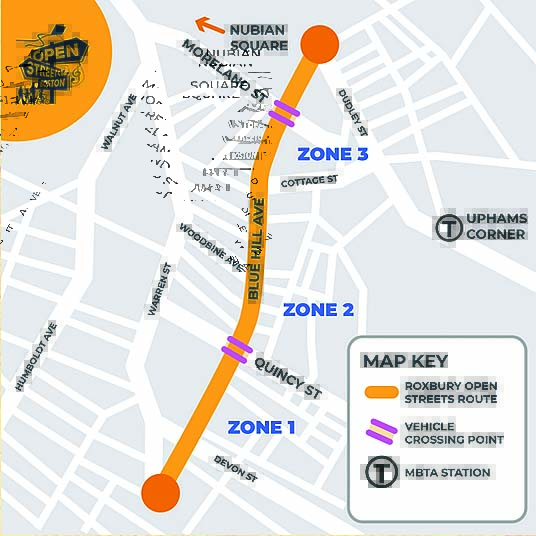 The Wu administration’s attempt to try out car-free Saturdays in the neighborhoods comes to a 1.2 mile stretch of Blue Hill Avenue this weekend. The part of the avenue that runs from Grove Hall down to Dudley Street will be shut off to vehicular traffic on Saturday from 9 a.m.- to 3 p.m.

The idea behind the “Open Streets” initiative isn’t just to clear a path for pedestrians, roller-bladers and cyclists; it’s intended to activate sections of the city with kid-friendly programming, performers, visual, artists, food vendors, merchants, and neighborhood organizations.

The full menu of programming for Saturday along Blue Hill Avenue has not yet been loaded up on the city-run website— openstreetsboston.org. But if it’s anything like the inaugural Open Streets event that took place on Centre Street in Jamaica Plain on July 10, it promises to be a crowd-pleaser, with beer gardens, pop-up animal exhibits, face painting, and a block party vibe stretching for multiple city blocks.

“City streets and roadways represent a huge portion of public land, and we’re eager to host these events opening up several major streets to community for summer fun,” Mayor Wu said when she announced the summer schedule in June.

“These events will showcase our neighborhoods and help reshape what’s possible as we fuel our city’s social and economic recovery.”

Dorchester got a dose of what Open Streets might look and feel like last month when the inaugural Little Saigon Night Market was held in Fields Corner. The event — a bit shorter in duration and more compact in size— drew a large crowd to Dorchester Avenue. The event, by all accounts, was a tremendous success. If anything, it might have drawn too large a crowd for the four-block stretch of Fields Corner that was cordoned off. But it signaled that there is a keen appetite for the kind of outdoor, on-street, block party sort of event that is increasingly a part of life in other major cities in the United States and abroad.

There’s another, larger Open Streets event— the last of this pilot series— planned for Dorchester Avenue on Sat., Sept. 24, from 9 a.m. on. The closure will cover a two-mile stretch from Freeport Street to Gallivan Boulevard.

Of course, Dorchester is used to accommodating parades and festivals that include road closures, like the Dot Day Parade in June and the Caribbean Carnival, coming up later this month. But adding more dates to the celebratory calendar— in new and different forms— is proving to be a popular concept.

Witness the highly successful DorchFest that was held on the Saturday of Dot Day weekend, which drew large crowds to Ashmont-Adams.
People, it seems, are hungry for new ways to experience their city. Saturday’s Open Streets on Blue Hill Avenue in the latest opportunity to do just that.