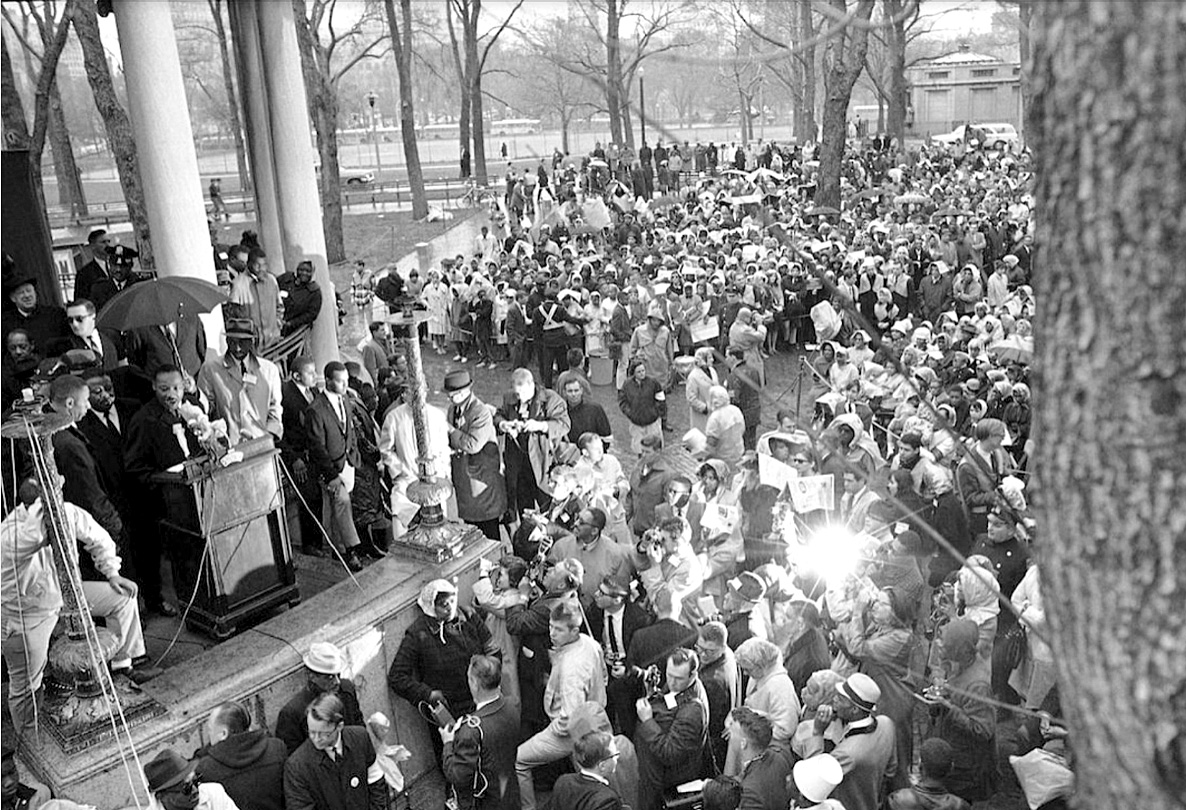 A file photo shows the scene on April 23, 1965 as Rev. Dr. Martin Luther King, Jr. addressed a crowd from the Parkman Bandstand on Boston Common following a march from Carter Playground in Roxbury.

In April 1965, Rev. Martin Luther King Jr. returned to Boston for a three-day stay in the city where, a decade earlier, he had lived while he studied at Boston University, and met Coretta Scott, the woman who became his wife.

On the 25th of that month, Dr. King led what has been described as Boston’s first giant Freedom March, which The Boston Globe described as a “mile of marchers.” The procession began in Roxbury and marched for two-and-a-half miles to the Boston Common, where a huge crowd gathered in a chilly rain to hear the civil rights icon.

I am proud to say I was there that day, marching up Columbus Avenue behind Rev. King to the Parkman Bandstand on the Common. I was there to give witness to his message of peace, justice and, brotherhood – one that continues to resonate for me today, some 58 years later.

On that memorable day, I was a student at Boston College in the second semester of my sophomore year. When I arrived on campus that morning, I learned that two classmates were planning to join the march. For me to join them would require missing my classes that day, but the call to march was powerful.

We were late arriving at the Carter Playground, but the organizers were late, too. Dr King was delayed because he had taken time to visit the Campbell School on the Dorchester/Roxbury line. The weather that day was cool and drizzly, and the scene at the Carter playground was a bit chaotic, as people wondered why it was taking so long to get started. That day’s edition of the Boston Evening Globe reported:

“One white picket marched right into the crowd gathering at the Carter Playground before the march bearing a sign hostile to Dr. Martin Luther King. Joseph Mlot-Mroz of Salem, president of the Polish freedom fighters of USA, was carrying a sign saying ‘Martin Luther King is a troublemaker’ – Harry Truman,’ and another read ‘Liar – J Edgar Hoover.’ The chief marshal of the march, James Reed, ordered some of his officials to circle the man at once to prevent harm to him, and they were ordered over loudspeakers to stay away from the picket.”

The procession to downtown finally began at about 11 o’clock, an hour-and-a-half late. We walked up Columbus Ave, crossing over Mass Ave into the city’s South End. Police reports estimated some 5,000 marchers walked the route, and we were encouraged by scores of onlookers along the sidewalks, many of whom then joined us.

There was a large police presence that day. There reportedly were as many as 500 Boston police officers stationed all along the route. As we approached the Common, the crowd surged up and around the Parkman Bandstand, and gathered for a series for speeches.

The Globe later reported: “Police Protect Dr. King As If He Were Fort Knox – Uniformed policemen and the size of the security force impressed Dr. Martin Luther King here Friday. “I speak usually where police are arrayed against me,’ he observed from the Parkman Bandstand. ‘Here they are arrayed on my behalf.”

I found a photo from that event online, and although you can’t see my 20-year-old self in this image (I think that’s me, behind the tree!), it brings back a vivid memory of a seminal day in my adult life, when I joined with those thousands on Boston Common as we lifted our voices in this wonderful anthem of America’s Civil Rights movement:

Ed Forry is the co-founder and associate publisher of the Dorchester Reporter.