The old Neponset Drive-In Theatre is one of many Dorchester movie spots lost to the decades. Photo from CinemaTreasures.com

Crisscrossing Dorchester and Mattapan, an attentive traveler can still pick out the movie houses that dotted the neighborhoods from the 1910s into the 1980s. One by one, they closed over the years, victims of the onset of television and dropping ticket sales, and morphed into churches, shops, apartments – or empty parking lots.

Even the still-operational Strand Theatre, once a vaudeville house and cinema, let film showings slip off its roster decades ago.

But a new addition to the Dorchester skyline has brought movies back to the neighborhood. The South Bay Town Center, which is expanding the existing South Bay mall with a retail main street and new residential housing, is anchored by a 12-screen AMC cinema.

With the new theater operational — and just before the new Star Wars takes viewers back to a galaxy far, far, away —it seems a good time to look back at the cinemas that once covered the area and offered an escape into westerns and cowboy adventures, sweeping romances, screwball comedies, and cinematic space operas for generations of residents.

The heyday of the local movie theater in Dorchester was the mid-20th century, says Earl Taylor, president of the Dorchester Historical Society. Records showed that there were around 11 theaters in Dorchester during the 1930s, and two in Mattapan. “They were neighborhood theaters, most of them, except for The Strand,” he said, seating around 1,000, and “they did a good business for many years.”

The late Anthony LaCamera, a longtime TV critic for the Boston Record-American, wrote a recollection of his old haunts in a 1983 supplement for the now-defunct Dorchester Argus-Citizen. When he was boy and young man in the 1920s and 1930s, LaCamera wrote, he and his friends would slowly hoard the 10 cents needed for a ticket, traversing the neighborhood by foot to some of the nearly a dozen local theaters.

“For me, the vanished theaters live on in fond memories, sharpened by occasional television revivals of old movies and old stars that we could hardly wait to arrive from downtown for belated suburban engagements,” he wrote. “It was at the local theaters, particularly The Strand, The Hamilton, The Winthrop-Upham’s and The Rialto, that we watched the magic artists of the screen and their patented vehicles.” 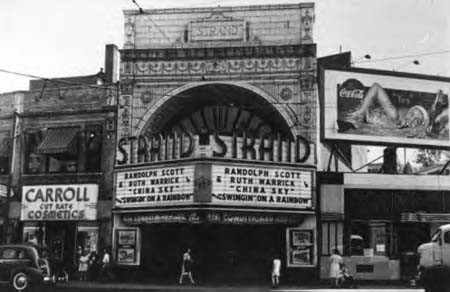 While outlying theaters in suburbs and malls weathered the years a bit, “the neighborhood theater buildings became very expensive to maintain,” Taylor said. “That was an indication that they were losing viewership, and all of a sudden the explosion of television. Those two things together really put them out to pasture.”

And in a slow fade through time, the theaters slipped into other uses. The Oriental in Mattapan became the Capitol Electric Supply Co., and The Mattapan Theatre on River Street at Mattapan Square eventually became the current MBTA parking lot. 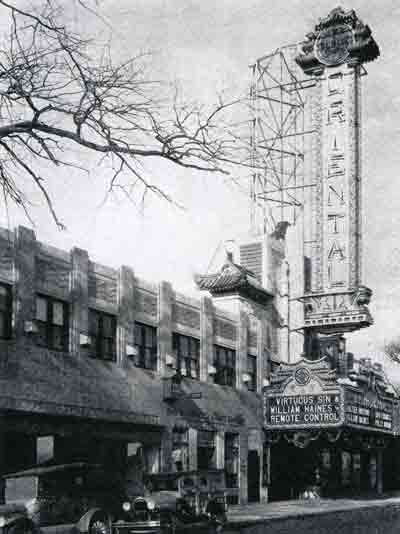 The Strand Theatre introduced “talkies” with Marx Brothers movies in the 1930s, running first-run films until 1969, when its closed its doors due to declining ticket sales. It reopened a decade later as the performance space it once was.

Franklin Park Theater, built in 1914 and designed by Strand Theatre designers Funk and Wilcox, once welcomed 2,000 theater-goers as a popular Yiddish theater in the late 1920s. It became a motion picture house in 1936, according to Matthew Lambros, author of “After the Final Curtain: The Fall of the American Movie Theater.” The format switched back to musical and stage acts in the 1950s before becoming the home of the New Baptist Fellowship Church.

“They all had those interesting fronts, sometimes arched, marquee, wide entrance, oftentimes decorative stone facing,” he said. “I always think it’s sad when we lose part of the fabric of the streetscape. The building that goes in place of an old building is not often so interesting.”

One of the last movie houses in the neighborhood was the Dorchester Theater on Dorchester Avenue at Park Street. It closed for a while and opened again as the Park Cinema, which was later “twinned” into two theaters, according to a Fields Corner Mains Streets review in 2009.

The lobby entrance at the corner where a Radio Shack store later set up shop, was bedecked with changing marquees over the years before finally shuttering in the 1980s. The original pressed metal ceiling and some of the colorful, Art Deco stenciled painting still survive in the higher floors of the building.

Larry Murphy wrote on the website CinemaTreasures of his childhood remembrances of the Dorchester Theater, where he and his friends gaped at John Wayne in his many war or cowboy movies. “These chaotic matinees cost twelve cents on Saturdays and twenty-five cents on Sundays and were packed with a huge assortment of un-chaperoned, undisciplined screaming kids who couldn’t sit still if their life depended on it,” he wrote.

“It was fortunate that there was a heavy steel door protecting the unseen projectionist, because occasionally he would have some problem with the projector," Murphy wrote. "Maybe the film would jump the sprocket, or the bulb would blow out or the picture may go out of focus. When anything occurred out of the norm and the matter wasn’t taken care of within seconds, his life would surely be in jeopardy!”

Around the time of Park Cinema’s closure, the two-screen Puritan Mall Cinema on Morrissey Boulevard was ending its run from the 1970s until roughly 1983. The building has housed Rainbow, an apparel shop, for more than a decade.

The loss of the theaters was cultural, but their use as communal spaces were draws for locals around their villages. “They created a sense of community for those nearby,” Taylor said. “With how insular Dorchester used to be, people didn’t venture far I guess, and a lot of people stayed in their communities and villages.”

As the new theater in South Bay Town Center purrs into motion with its IMAX and Dolby cinemas, the developer’s managing director, Brad Dumont, said that including the showpiece AMC was an “obvious” choice for the South Bay expansion. They wanted a modern theater and landed on AMC after a handful of operators had expressed interest.

“We felt there were huge voids in the market that weren’t being met with the current offerings in Braintree or downtown,” he said. “That’s pretty far for people in Dorchester to travel.”

As Taylor said, theaters can be a community’s anchor, and the South Bay team hopes theirs will work the same way, bringing in diners, shoppers, residents and movie goers alike. “We’re focused on making this a community gathering space and making it a place where people want to come and gather and hang out,” Dumont said.

So after more than three decades, the marquee lights are up again in Dorchester, and the show goes on. 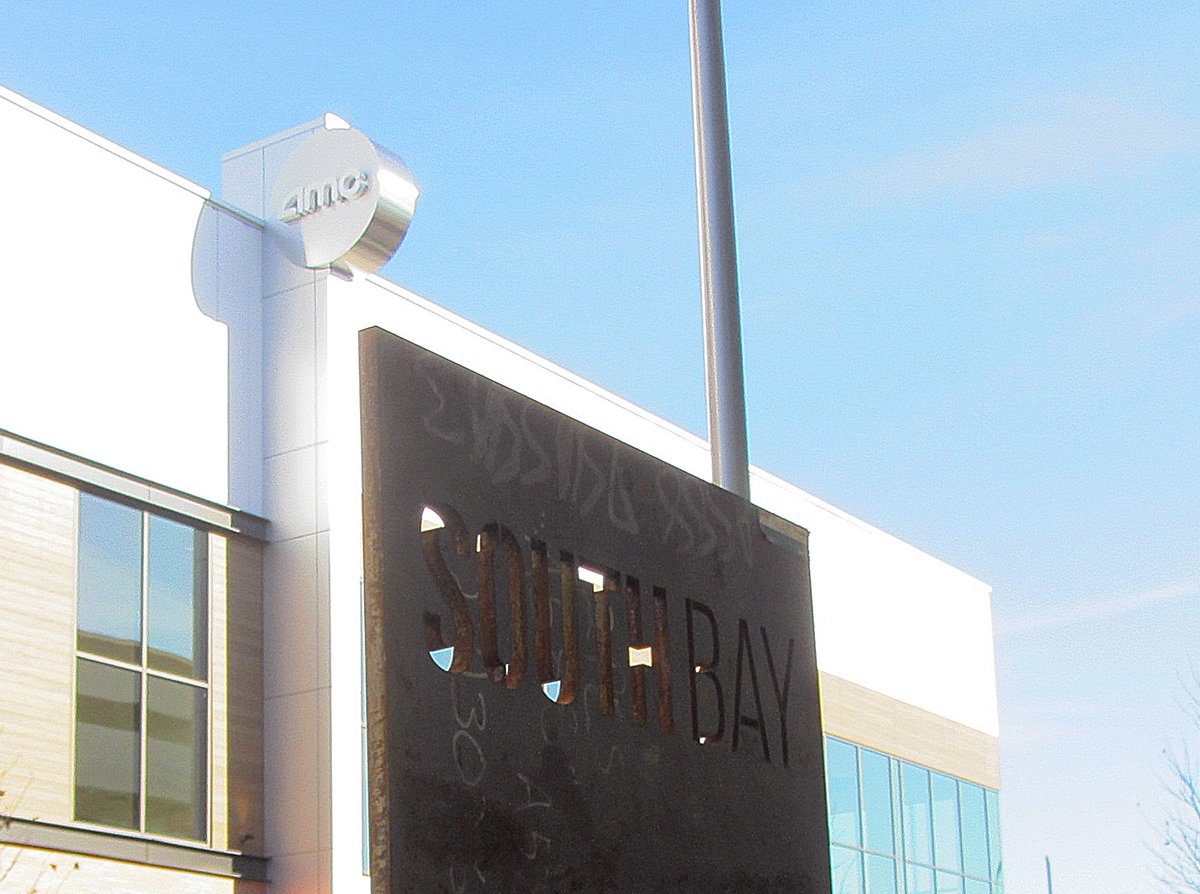